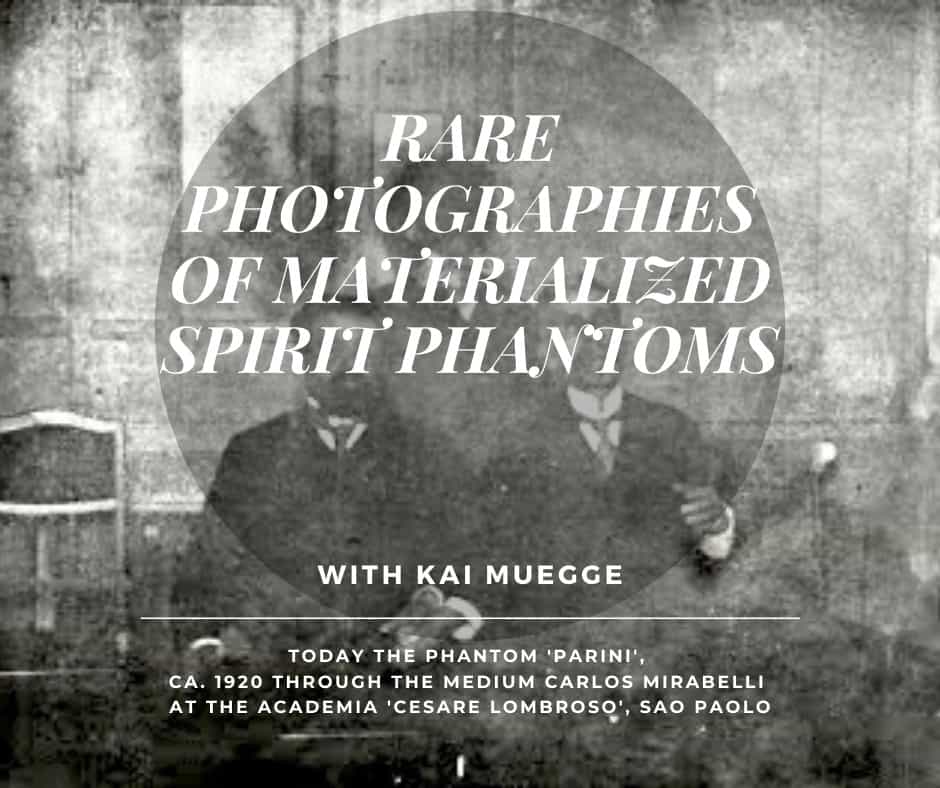 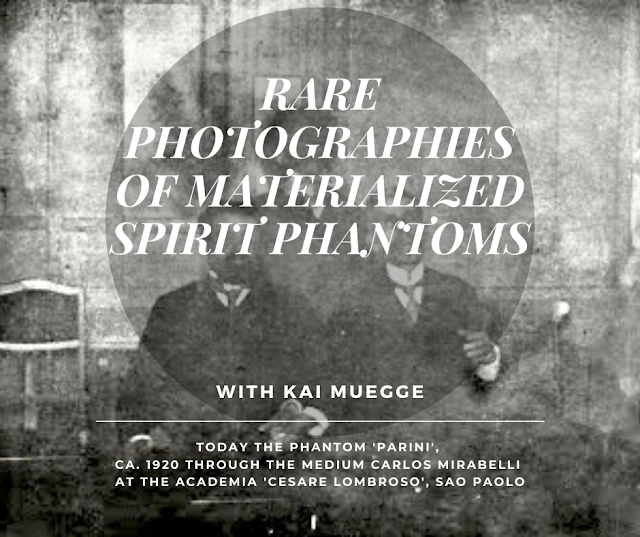 THE PHANTOM PARINI – THROUGH THE MEDIUM CARLOS MIRABELLI

Although the phantom ‘Parini’ materialized several times in séances by Carlos Mirabelli and could also be photographed in high quality – during the famous series of sessions at the Academia ‘Cesare Lombroso’ – we are presenting one of the rarely shown copies today. Its peculiarity has to do with the conditions under which the photo was supposedly taken and with a follow-up photo that may have been taken more or less immediately afterwards. But first let’s take a look at the photo in focus today. We edited it a little and brightened up the rather dark original!

Usually Mirabellis daylight materializations appeared from a kind of distortion or fogging of the air. Some observers described cloud-like structures from which the phantoms seemed to descend. For the professors Castro and de Goes, too, it was nothing unusual to sit at one table with the phantoms. The visible allegedly 17th-century poet Parini mostly recited his own poetry during the short episodes of his manifested presence or announced his ‘identity’ in Italian!

The de-materializations were also well observable for the more than 300 Mirabelli-daylight-materialization-witnesses. Either the figures began to hover again, as can be seen in other photos, gradually reducing to half of their original size – or disappearing stepwise with more and more parts of their shape becoming invisible – until they finally were gone completely. In many cases, they were again enveloped by ‘a cloud’ before they disappeared. Other phantoms disintegrated at lightning speed and within a second simply left leaving the empty chair and the puzzled observers and experimenters behind…

GERMAN CONSUL CONFIRMS THE ACTUALITY OF THE EVENTS
Around 1920, German parapsychologists made an official request to the German consul in Sao Paolo because the long list of dignitaries who allegedly had attended the meetings also included a whole series of politically active men and women. One wanted to know whether the consul had any knowledge of Carlos Mirabelli’s mediumship, or if he knew any assessors personally. The official request was followed by a fairly extensive submission by the consul, who claimed to know some of the witnesses of the events personally and that the phenomena were currently on everyone’s lips. He confirmed that the men and women concerned were able to testify to what was reported and were convinced of the authenticity of the phenomena …

Just under 10 years after these recordings, the German parapsychologist Hans Driesch visited Mirabelli. At that point in time, his powers seemed exhausted and Mirabelli appeared to Driesch as a very old man who could only accomplish small object movements …

The publications about Mirabelli in their Portuguese originals were again and again only hardly possible to access due to the language barrier, and many important aspects did not come to light internationally before decades. The review of Polish or Icelandic literature on exceptional physical mediums such as Guzik, Kluski or Indridason was just as complicated and delayed the excavation of important materials sometimes for decades.

Today Mirabelli is counted as one of the great exceptional mediums of his time, a daylight medium that was able to demonstrate its strongest manifestations in slightly darkened daylight conditions…!