ECTOPLASM AND THE BLUE SPIRIT LIGHTS 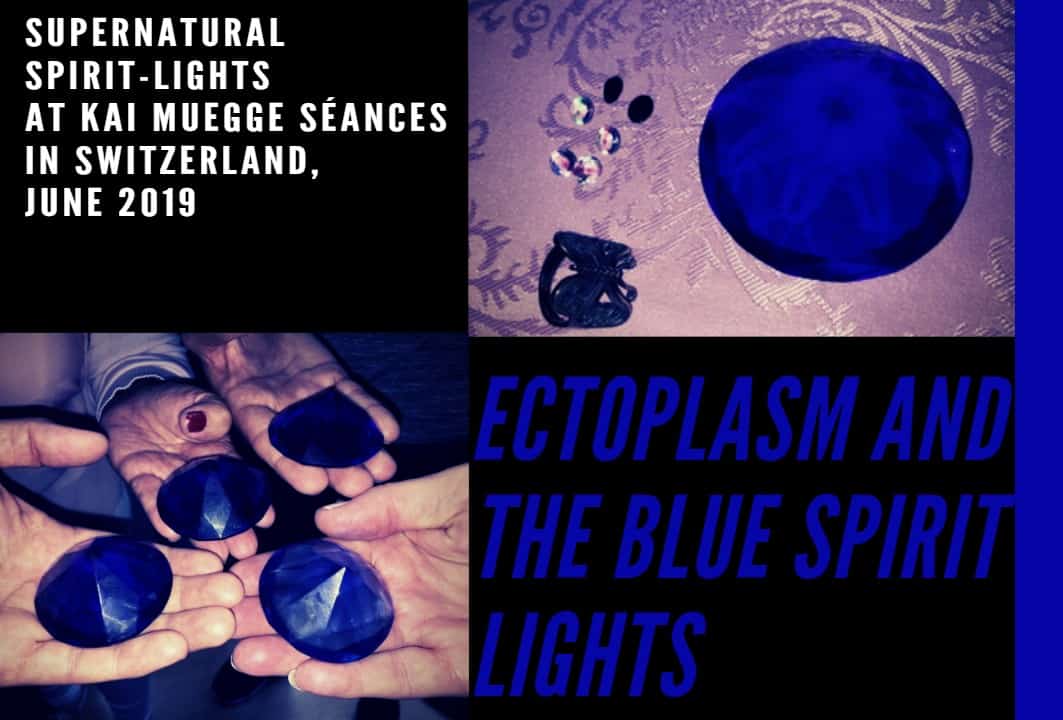 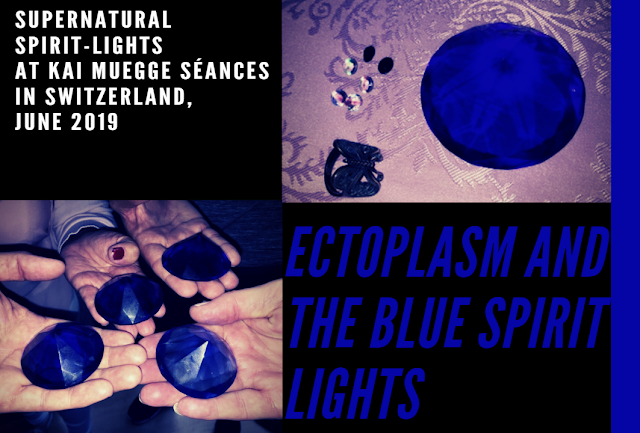 “We had already seen the light in the ectoplasm before, this and other evenings, but then that went beyond everything …!”

“According to the trance control, the mass of the ectoplasm was in a highly condensed state of aggregation and was neither like a veil nor similar to a tissue.”

“Every single flash dipped the room and the strange mass into a supernatural light! The effect is hard to describe, the blue light is something very special!”

“Imagine an enormously large cocoon of ectoplasm generously enveloping and surrounding the medium!”

“At some point in the dark, a cascade of blue lightning started to explode in this cocoon, discharging everywhere in or on the cocoon!”

In June 2019, Kai and Julia Mügge give further séances in the Basel Psi-Association (BPV, Basler Psi-Verein), where it came to extraordinary occurrence of ectoplasm. Before that, in the first part of the week many first-time visitors took part in the séances. It is always exciting to see how they absorb the events and ultimately process them.
These included the object materialization of activation stones and the apports of gems, rings and a bracelet for attending sitters. In addition, ectoplasm occurred for example in a slow stream from the medium.

In the second half of the week, then, the ‘Extended Séance’, with only very experienced sitters, followed the one in which weeks ago the monk ‘Gonpo Yeshi’, called ‘Po ‘, materialized in front of the sitters. He could be photographed together with the medium!
A corresponding interest prevailed then. All sorts of influential personalities from the BPV’s environment gave themselves the honor in anticipation of a renewed appearance of the spirit, or another materialization of the quality of the monk.

It had a strong thunderstorm on this day.

After the short introduction, the sitters and the medium entered the séance room. This was followed by a kind of meditation in the common singing of sacred songs. After a brief sinking into the trance, the trance personality of the medium speaks. It talks about recruiting sitters into the grand plan to save the world.Then Hans talks about influencing necessary electro-magnetic fields after the massive thunderstorm  had charged the whole environment with electricity. He could not promise anything this time but they would now start with the preparations.
The following descriptions are taken from discussions with present sitters, such as Julia Mügge, Michael P., Lucius Werthmüller, Sabin Sütterlin a. o .:

The expositions begin: There is darkness. A strange bright blue light illuminates the medium and the ectoplasm in lightning-like sequences. It obviously comes from the mouth and is highly condensed. With each discharge of the light that once shines within the mass, sometimes seems to come from the outside, the mass assumes such extraordinary brightness that it reproduces sustainably on the retina. First, the ectoplasm covers only the chest-area of the medium. Meanwhile, it flashes in a higher frequency that you can see the ectoplasm increase in mass enormously. It gradually increases until the floor is covered by 5 foot in front of the medium.
Then there is a break. Darkness envelops the sitters again.

The talking spirit control ‘Hans’ announces the materialization attempt of the evening.
Tapping signals signal the two helpers on the right and left of the cabinet curtains to open them.
An extraordinary picture is visible for the sitters!

The obese medium is now generously enveloped in the entire mass. From such a concealment the materialization of the monk arose the last time.
This time, however, a thunderstorm of blue light flashes is unleashed. They seem to be discharging on and within the mass. The alien light makes the cocoon of ectoplasm appear larger and more substantial. The alien structure shines again and again in its extraterrestrial light until the discharge frequency decreases and slowly dips the room back into total darkness. Those present have glowing afterimages on the retina. To Parapsychology paranormal lights and light discharges are not unknown. Especially not in spiritualist sessions …!

Then the spirit control ‘Hans’ starts to speak again. He explains that the blue light has to do with the portal, which is created by the spirits in charge and does represent information patterns sent through space and time. Due to the circumstances mentioned, however, the resulting ‘creation of a spirit materialization into the physical’ was not possible.

With an aphorism the meeting was dissolved shortly afterwards.
We thank the Basler Psi Association and all those present this evening.