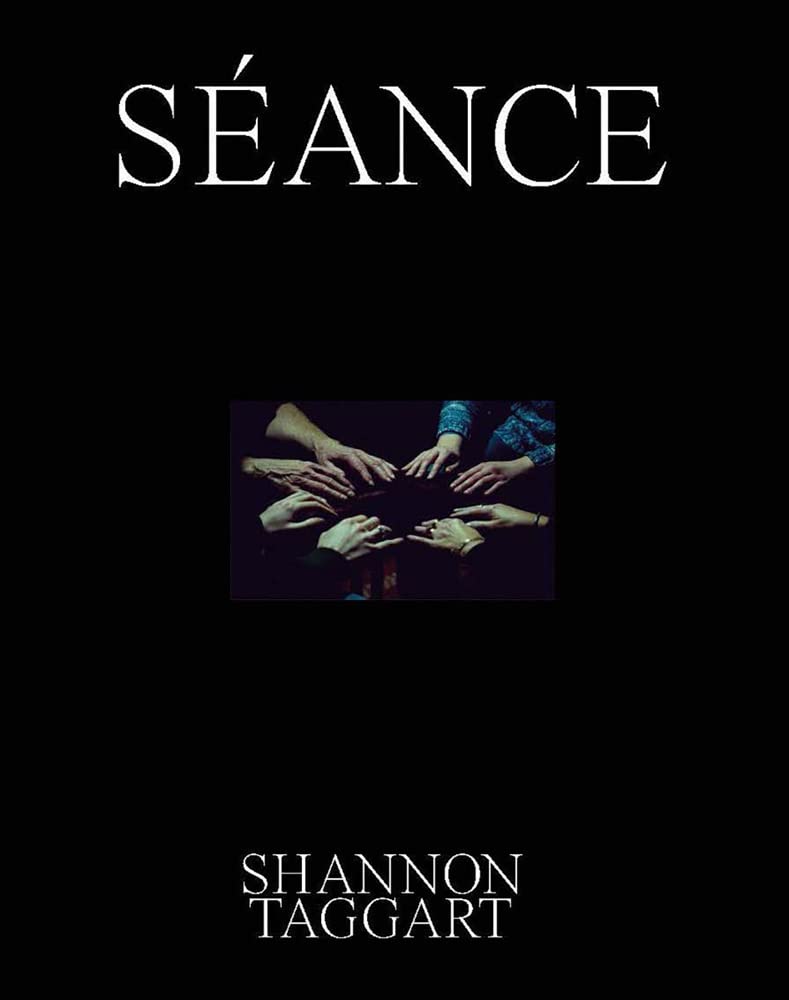 A portrait of spiritualist communities across the US and Europe now redesigned with additional archival images!

‘Breathtaking and Enlightening’, ‘Spellbinding’, ‘Absolutely beautiful’ are only some random examples from the overwhelmed voices, reacting on the new release of ‘Séance’ – named one of ‘Time’s best photobooks of 2019′.

Everybody can see and feel it. Something really special is coming with that book, that is right from the start assuredly more than a common photo-book. The New York Times writes: ‘Taggart’s images are rife with mystery. There’s a poetic bent to them as well. Looking at the images throws you into this unique world.’

Taggarts art-related approach catches the unspeakable, the realm inbetween, the fluctuating momentum between real and beyond with stunning presence! From her images something never before so succesfully depicted is revealing itself.

Like materializing apparitions the formerly unseen realms decipher, decode themselves exclusively in Taggarts photo-art and offer everybody an entrance to the world and the work of the Supernatural!

This is new and the overwhelmed critics are struggling for words to describe what there are no words for. Something that lays in the origins of the species and for what mankind always has digged and digged untiredly, deeper and deeper into the geographies of the human soul – never really finding what it was looking for, Shannon Taggarts ‘Séance’ leads a way in.

Having created such a success with a first edition, it is mostly hard and a difficult struggle to endure the success – or to renew it and although economy, the market and your publisher might push you in this regard, it does happen rarely.

To describe so uniquely epic human affairs like Taggart – how should that be possible in the same manner with a successor of ‘Séance’? Impossible? The epic proportions of the quest for the Supernatural as depicted in ‘Séance’?

Some might speculate Shannon is guided by spirits – looking for her from now on – because there is a new book of hers in the making that not only dives again absolutely uniquely into the land of the Supernatural, it does it even this time very much more on emotional scales, telling the fate of upright and honest people going on a journey, it is the same quest but taken in even grander proportions.

From all runs of life once this explorative effort was being taken, and this time a story is being told from a belief-system-side like science, less from religious viewpoints, more from the pragmatical, the experimental and foremost the personal human perspective.

Something truly amazing awaits us with Taggarts new work! Allege the understanding of the supernatural intertwines highest hopes and nature of a scientific endeavour, its faculties, but also the existing hidden fears – of the unknown – the questions and dounbts, the most profoundest thirst for human exploration and their animosities – let’s say in a group of young and engaged people who came together – chosen by fate and the dynamics of history – wanting to academically approach these questions.

From the University of Missourie they all came flocking around a human icon already then, a Professor, a poet, an anthropologist, a shaman and historian, taught by Indians where he lived for years! Eventually nearly half a century their journey will have taken them to the strangest places.

Today trying to look at it in a whole things seemed to have evolved, reminding us of a Homer-like odyssee, turning the braveness and uprightness of human approach towards the twist and turns that shatter dreams and ruin lifes, that will lead all honorable into the tragic of demise.

Shannon Taggarts NEW BOOK will exceed all expectations. It will tell you about a story so intensively and profoundly connected with us all, our hopes and dreams and what can become of them in our modern world. Shannon Taggart tells you in  her unique way the vibrant story of SORRAT, a sworn group of people who went on a journey but enraged their god in whose name they were sailing.

Tell me, Muse, the deeds of the much-wandered man,
Who wandered so far, after the holy destruction of Troja,
Of many a man’s city seen, and custom learned,
And on the sea endured so much unnameable suffering,
To save his soul and his friends’ return.
But he did not save his friends, however eagerly he strove;
For they themselves by iniquity prepared their ruin:
Fools, who slaughtered the oxen of the high sun
Slaughtered; behold, God took from them the day of their return.