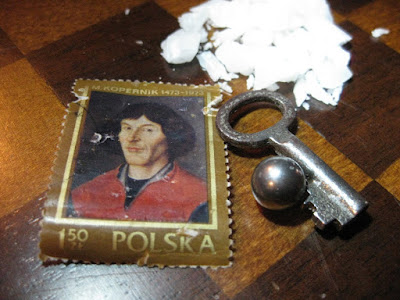 Picture: The “Copernicus” Apport from the 15th Dec. 2009 – a 1973 stamp from Poland, a steel ball and a miniature key! Unknown to the Felix Group was the fact, that Schnittgers were travelling in 2009 on Copernicus traces in Poland and Germany!

(Karin and Walter Schnittger are interested in spiritual matters and philosophy for 25 years.
Among many others they participated in the Scole sittings many times.
Their homepage: www.claudius-portal.de has started to provide information
received through half trance dialogues with the Claudius Congregation.)

After a warm welcome by all group members we, Walter, my husband, I and one more guest this evening, a lady from , were guided down to the Seance Room – which was equipped with the familiar traditional English Cabinet at the end.

Objects like a trumpet, a drum, a bell, a plaque and a wind chime at the ceiling could be seen. We were seated near the “point of action”.

After listening to the instructions for a successful seance, given by the circle leader, the medium went slowly into the state of deep trance.

Since this witness report is not the first, and it will not be the last, I shall not go too deep into details. We therefore just state in summary what Walter and I were able to witness.

After the medium got into the trance state, Hans Bender, the spirit communicator welcomed the group and the guests. He told Walter and myself: “I have the feeling that somebody is approaching that close that it will be possible to potentially provide a direct message to you. It is a deceased scientist, but I cannot yet recognize who it is. I perceive that he feels attracted to you and that he is only present this evening because of you. As far as he will be able to make himself recognizable, the progress of the evening will show this”, Hans Bender continued.

Throughout the seance Hans Bender gave instructions to the circle leader to change the position of the drum and trumpet and to dim or increase the brightness of the plaque (a wooden phosphorescent square of appr. 18 cm x 18 cm) etc. He as well asked the sitters several times to hold hands to strengthen the energy for the physical phenomena. Music and singing was also requested. He announced the building of energy clouds, which actually was then recognized by some sitters throughout the duration of the seance. Hans Bender told us that the energy field was initiated and would build up slowly now. 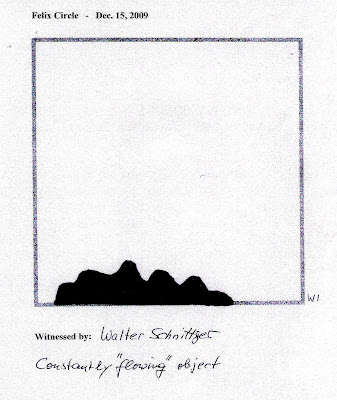 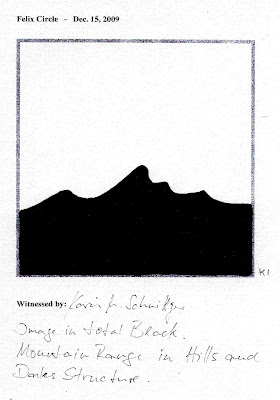 First phenomenon experienced was the sound of the wind chime from up the ceiling which we heard repeatedly throughout the séance. After that not only tapping noises were heard originating from different spots at the ceiling, they sometimes even followed the rhythm of the music. The trumpet went up into the air several times, it came quite close to Walters face and even slightly touched the circle leader’s forehead.

Quite loud raps and taps were heard by the sitters several times. While some sitters felt the usual coldness around their knees, others felt a draft over their face. 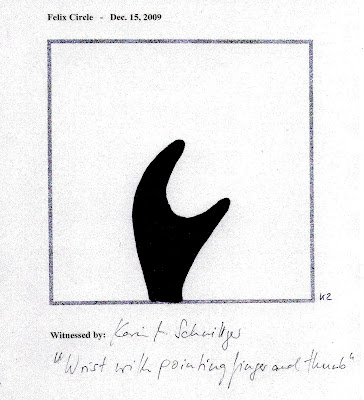 Picture of ectoplasmic structures seen by the witnesses – Karin Schnittger: Wrist with pointing finger and thumb

After about an hour of action the activities focused on the plaque. These phenomena were highly interesting. Various shapes were seen on the plaque throughout the duration of the seance.

I myself saw many images appearing on the plaque of which I would like to describe three, the ones I saw with clear features, as shown below: Fan Structure, Mountain Range, Wrist with Pointing Finger and Thumb. 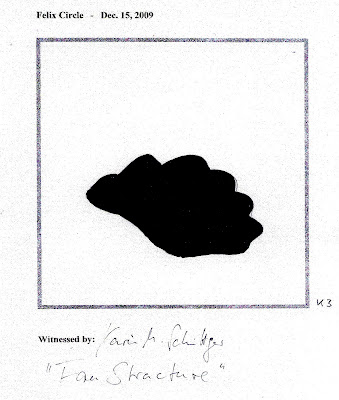 Walter saw: Small Fingers, black area in shape of a cloud within the centre of the plaque’s luminous surface with no connection to the fringe of the plaque. 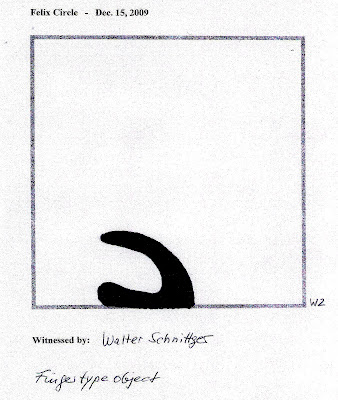 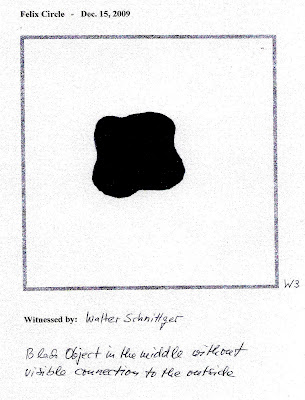 Walter Schnittger: Black object in the middle without visible connection to the outside

The phenomena with fingers and different shapes happened several times during the duration of the seance. Twice we saw the plaque rotating slowly by approx. 90 degrees.

It might be interesting to mention that Hans Bender worked in close cooperation with the so called chemists. In one particular occasion we heard a low-voiced conversation between Hans Bender and the chemists – obviously to discuss the next steps.

At one point of the seance Hans Bender asked the circle leader to hold the trumpet with the wide opening close to the ceiling, at the same time asking the sitters to jointly count from three to one, three to zero, and last but not least 10 to zero, a procedure which seemed to be new to the group sitters.

Arriving at the zero of the last counting, a noise like the dropping of an object was heard by some sitters. It was assumed by the circle leader that this was the materialization of an apport which was confirmed by Hans Bender later on, stating that the apport includes a message from some spirit person for Karin and Walter Schnittger.

Close to the end of the séance H.B. mentioned: “If the information is correct that I have available here, there is a greeting from a deceased friend of Walter and Karin here somewhere in the room”.

After turning on the light in the séance room there were three wax-ball type apports on the floor, one pretty large and 2 smaller ones. As we learned later on after the opening of the wax balls, two of them had a connection to us.

The small one contained a stripe of paper with pretty clear handwriting in a foreign language. It was identified later in the evening that it was a message in connection with Red Cloud.

Picture: “Red Cloud is my name”. Message in the Sioux/Oglalla sub-dialect “Lakota”. The Felix Groups connection to the Harrowgate Rainbow Circle, whos main spirit-guide is “Red Cloud”, may be behind this short greeting message.

The large apport shows a stamp from with a picture of Nikolas Kopernikus and in addition a small key and a steel ball of 9 mm diameter. It is now work in progress to solve the riddle, we believe it has a symbolic meaning. Anyway, besides our work to solve it, we are open for all constructive proposals.

This apport was a big surprise for us. Almost exactly 5 years ago, Nikolas Kopernikus surprisingly contacted us in one of our regular trance sittings with the Claudius Congregation. This summer we visited the most important places of his life.

The second smaller apport connected to us was announced by Hans Bender as a greeting from a friend of us. The apport shows on a small piece of paper a signature and some Rongo Rongo type signs ( language). Interestingly the signs on the apport are identical to those received with the Scole film work about 13 years ago where we participated. At that time we received 2 double lines with in total about 55 Rongo Rongo type signs that we were unable to decipher.

Picture: burnt paper piece with 6 rongo-rongo-like not yet deciphered glyphs and the signature of Dr. Vladimir Delavre (deceased 2007)

Now we have some of them again and we will again try to get the meaning. Good hints or proposals are more than welcome.

The second part took us about 3 days until we had the solution. It is as always, once you have it, you just don’t know why it did not come to your mind first place.

It was a big joy for us when we finally identified it as Dr. Vladimir Delavre’s signature. His signature is a typical Doctor’s signature as you find them on prescriptions.

Picture: Delavres original signature, taken from his defunct publication “Transkommunikation” from the nineties

He passed over in 2007. In addition to his profession as a medical doctor, he is well known because of his very interesting work in trance.

We now are very happy about his way to send greetings.

We had conversations with during lifetime and a communication with him in February 2009 during a Claudius Congregation sitting at our place where he asked us to pass on a message to his wife.

So, one riddle is solved, 2 are still open.

Finally, we are very thankful to the total team that we could participate in this séance on and we send greetings to the Spirit World, which keeps us busy with their riddles. If we would know how to pose them a riddle too with our greetings, we definitely would do it. (But maybe the way we all behave during lifetime may already be riddle enough for them).