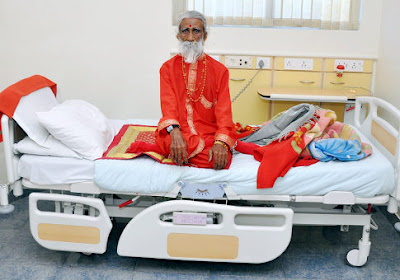 UPDATE: Already 2003 medical investigators have proven Prahlads claim to have a hole in his palate to be true. Prahlad claimes a goddess had somehow made this hole into his mouth roof, when he was 8.
Furthermore it is out of this hole his body – under the agency of divine influence – is producing a few drops of a mysterious yellow brown liquid, that allegedly contains high dosed nutrients or quasi-nutrients on a spiritual base!

Fact is, that 2003 not only the claimed hole was found but also the liquid, that was frequently dropping into his mouth area! The scientists described actually a golden looking liquid that emanates in small amounts from Prahlads mouth roof. Unfortunately 2003 the investigation had not the money to do extensive search on this liquid.

Interestingly does the newly ended study neither dement the hole-in-mouth-with liquid-story, nor is it mentioning it – at least in public!
If the hole is actually there producing a mysterious liquid, that has many roots in the indian superstition by the way – then they are very surely trying to explore it at the moment!

The verification of the hole in regard to the processes, that let Prahlad live without eating, would have a tremendous impact – if it s made public naturally!

Prahlad Jani (Mataji) claims he has survived without food and water for more than seven decades. He lives by consuming “spiritual” energies. Now a thorough study wants to reveal the secret behind this claim.