MORE EPISODES OF THE CRYSTALLINE NETWORK CHRONICLES – or How the Spirit Controls are creating the Activation Stones…!

Home » MORE EPISODES OF THE CRYSTALLINE NETWORK CHRONICLES – or How the Spirit Controls are creating the Activation Stones…! 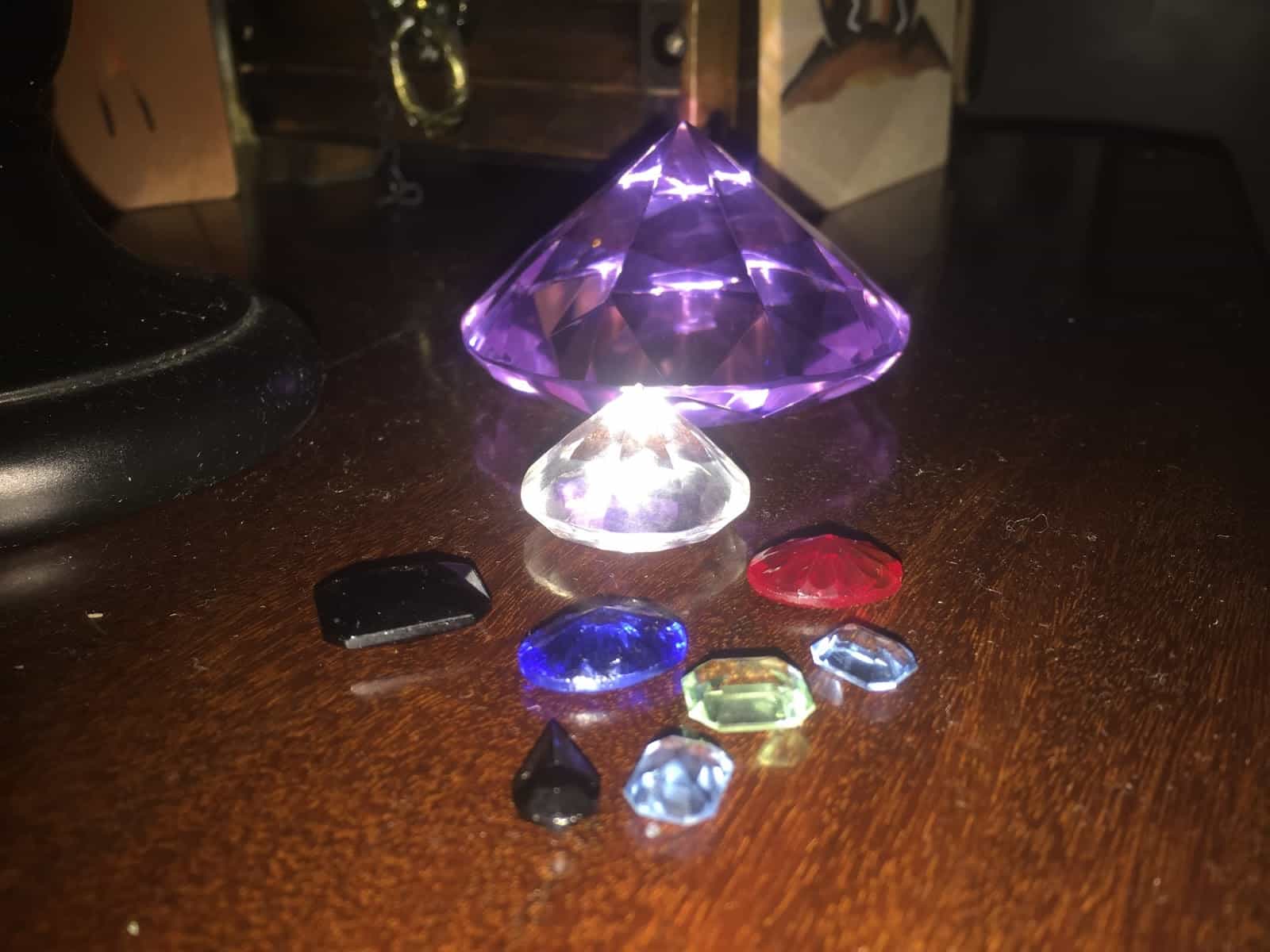 Those who have followed us in facebook are already informed about the last weeks séances and the integrating spirit teachings about the human kind and our purpose.

We carried on to help the spirit controls to build the so called ‘Crystalline Network’ in the Physical and to invite more and more people into it internationaly.

A loose choose of many beautiful instances have been presented already in our facebook ‘Chronicles of the Crystalline Network’ for your consideration!

ACTIVATE SPIRITUALISMS HEARTLAND!
A town in the States, a room full
of sympathetic participants. A few minutes ago – the medium and his wife
were being held at every single of their limbs during that experiment –
handforms appeared on the other side of the room and built up in front
of an illuminated tile (plaque) until everybody could see them as they
were presenting themselves and were tipping with their fingertips onto
the wooden tile.
Then they vanished and Julia started in
white light to put all things from the action area away to have the
space empty all sitters sat around in ‘handchain’ themselves.
Medium in the safety of the cabinet.
Darkness.
After a short introduction the spirit control was wanting everybody to
look where the tile was located: FLASH – the room was illuminated by a
massive and typical discharging of light.

The first believe already to
have seen something. Julia is instructed to make light. People start to
scream and shout, some laugh, others cry: Inmidst of the focus area
opposite to the mediums seat a huge spiritual Activation Stone sits
proudly: 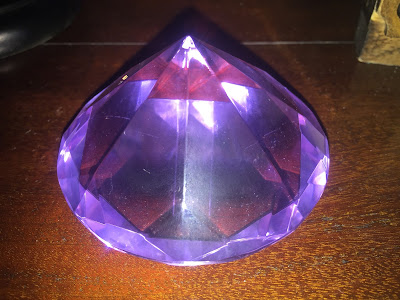 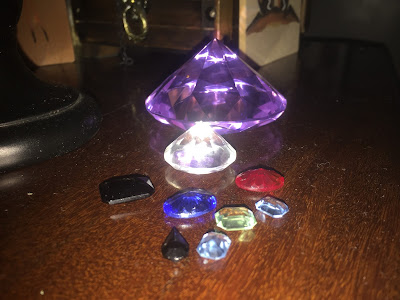 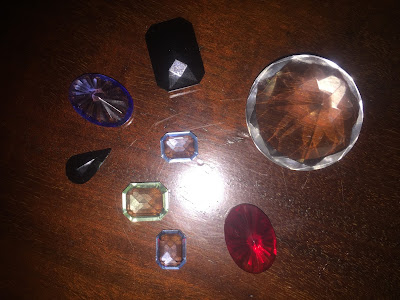 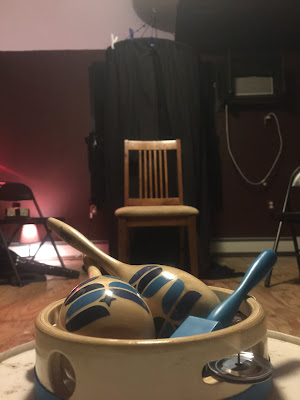 HOW THE SPIRITS CREATE THE ACTIVATION STONES or
Episodes from the Crystalline Network US 2015 Chronicles (in chronological order)Episode 1:
A Séance-Room in the State of M., full of enthusiasm and anticipating
sitters. The spirits have already come and touched and caressed the
sitters. One could see them moving, they are blocking out orientation
lights installed in the ‘activity-area’, when they move. Several times
the music is turned down and clearly their footsteps are being heard in
the room.
The Medium at that time (like always during activity) is
being held at hands and feet and speaks and comments from his seat on
the opposite side of the circle.

‘The Spirit Control asks for Red Light.’
Light goes on and the medium is let go.
Everybody sees it now sitting there in front of his cabinet.
A young lady is asked to come forward and sit in front of the medium.
A change in the personal energy pattern of the incorporating spirit is
announced and ‘Hans, the Alchemist’ retreats and another entity steps
through the portal.

The new spirit control is introduced and it
takes the hands of the young lady in front of the medium and starts to
speak. About the activation emeralds, the healing gems, and that they
are part of a materialization process of the huge spiritual
(activation-) stone a few minutes ago. About to activate good and
positive human behaviour patterns…!
It talks about the size,
cut and form and how energetical signatures are embedded in the stones
specifically for their receivers – and that it was always known that she
would today receive something that was created from the pure ether just
for her.

Mediums right lower eyelid suddenly bulges massively, as if something had appeared behind it…!?
The Sitters have stood up, stand closely around the scene, stunned, surprised and amazed.
‘It is done’, the medium moves now the young lady sitters held index
finger to its eyes.
The spirit control/medium wants the assurrance again
that everybody can observe whats going on. ‘Yes!’, the sitters answer,
the swelling under the eye is massive and well visible in the direct
beam of the torchlight.
‘There it comes!’, says Julia: The medium
uses the ladys index finger and massages the lower lid. A huge GREEN
gemstone appears from behind the lid and jumps into existence…!
‘LOOK!’, says Julia: ‘The other eye as well!’ The left lid bulges. The
medium reaches towards it with the other held index finger of the young
lady and pushes upwards: A huge BLACK gemstone appears, also of
considerable size…
The medium mourns when the huge object slips from its eye…!

‘Thank you, Spirit!’, the Sitters cheer and them and the young lady retreat back to their seats in the circle…! 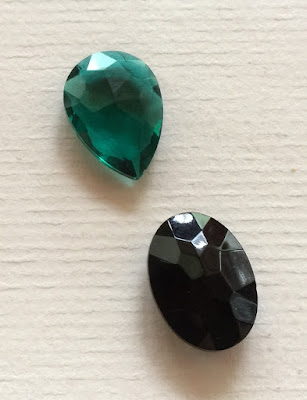 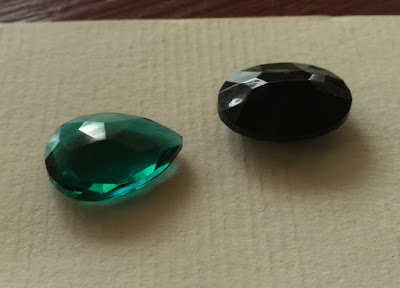 Episodes from the Crystalline Network US 2015 Chronicles (in chronological order)
Episode 2:
After the first Activation Stone was overhanded to ‘The Institute’ and its charismatic leader, chair-woman and Physical Medium Colleen S., the first Activation Stone for a Group in the state of T. was materialized at TioMimé.
Séance Conditions: Strong group, strong spirit presence!
A lot of phenomena, a lot of spirit teachings.

After a specific introduction held in Red Light Conditions, the energy
pattern once again changed (another spirit took over), announced its
presence and the start of the apportation process.
All Sitters were
allowed to stand up, standing around the medium and the receiving
sitter, a distinguished lady from D., medium veteran and holding
physical groups for years, an additional torchlight was directed into
Kais face, from which all objects were eventually materialized.
4 of the gemstones then were eyeball-apportations, the main ‘activation stone’ came from the mouth…
Congratulations!
from Tasmania to Denmark
from Australia to Switzerland,
from US to Germany,
from Scandinavia to Spain
SHINE ON YOU CRAZY DIAMONDS 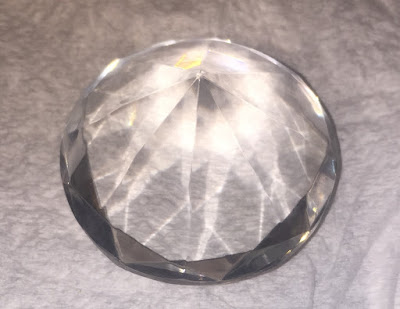 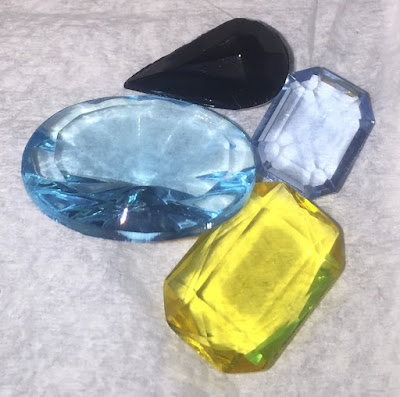 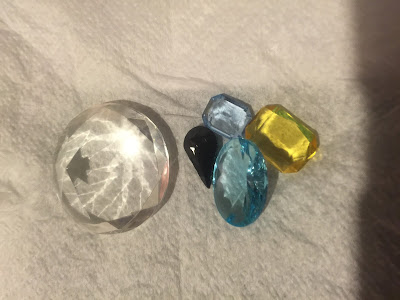 Episodes from the Crystalline Network US 2015 Chronicles (in chronological order)
Episode 3:
Seanceroom at TioMimé, it’s the Blue Moon Séance of the Week.
Totally
different phenomena than the last séance are today provided by the
Spirit Control. A tall and slim shiny or glowing entity entered the room
first and then came back to the medium in the cabinet that was talking
from there during the visit. In the end a materialized head looked out
of the cabinet with shining bright eyes!

But that was not the height of the séance. After Julia had cleaned the
room again from all focus objects she returned to her seat, started to
hum a song for all audible and switched off the light.
The medium
was taken in control and talked about how more and more receivers of
activation stones take the chance, activate them by activating the
better human being in all their spiritual activities.
In the end a flashlike discharging of light occurred above the cabinet and spirit control congratulated Neal R. to be welcomed in the ‘Crystalline Network’ (soon theCrystallineNetwork.org)!
Julia switched back on the light and the sitters started to scream, cry and cheer:

In the focus area suddenly a huge stone had appeared! The Activation
Stone for TioMimé, N.! The Activation Stone for Dr Neal, one of
those shining souls, always busy for the good within man! The Spirit
World says ‘Thank you for giving so much!’
ACTIVATE THE CRYSTALLINE NETWORK / All you need is Love…! 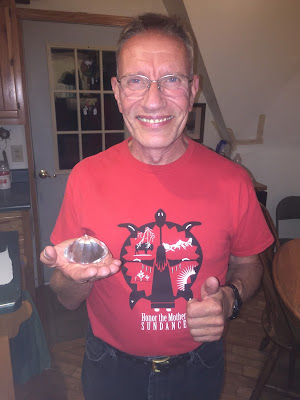 Last Episode:
The day before a last memorable séance at TioMimé, ‘spirit
control’ sat again and shared wisdom and spread awe amongst sitters.
First another activation stone was produced from checked bare hand into
the cupped hands of somebody for years engaged and committed, full of
positivity and love: via Andrea C. the network reaches out to
T. the second time this week.
‘Congratulations’!The spirit
control underlined once more the independency of the networks rules and
principles from the stones. ‘They are only physical reminders,
representers and express our admiration and appreciation. Their size is
irrelevant though as it is their material value. They are spiritual
objects created into the physical by very rare processes! It is about
what activates them. A positive attitude and the Love amongst you
embodied humans. You can form something together, and you can change and
shift together!”

‘Now please again clean the room from all
objects within the arrival area. Some of you have seen the marvelous
process before!’
Julia takes the wooden plate where minutes before
spirit fingers played with illuminated ping-pong balls in approx. 6/7
foot distance from the cabinet away and starts to hum loudly when
sitting down and switching off the light.
Spirit control
immediately starts to speak through Kai in the cabinet and announces the
incoming of another ‘activation stone’ for a last receiver:

FLASH!
Somewhere above the cabinet another glistening white light explosion
appeared: ‘Now Julia, shine light onto the focus area!’, and Julia
shines a torchlight beam…!
Accompanied by the amazed remarks and
expressions of sitters an amazingly beautiful strange coloured
Activation Stone had appeared where seconds before there was simply
nothing.

‘There is a man we are eager to invite. Eager to offer
what we have to offer with no condition like always: The Activation
Stone! For Reverend Kevin Lee!’
For days Kevin was with us and had
supported the spirits with his heart and his mind and his energy, the
way how he always does. He brings people together on a very regular base
to work for their expansion of the heart, mind and spirit, the
expansion of man and its consciousness!’
‘The Stone is already activated!’

Then Spirit Control shortly adressed one last time its idea of a
globally working group, the network, working towards an experience of a
breakthrough like in small for example sitter groups of the séance room.
The way a sitters group encounters an expansion of its opportunities
the moment its actions open the door to higher spirit communication, it
can happen to a group of a broader scale as well with a breakthrough on a
broader scale!’
‘The path of deliverance for the human soul and
its epiphany doesn t lay in the abstractness beyond the fathomable in
whatever theory. It lays somewhere else. Inbetween all the things the
human being is searching for, he always will find one thing for sure:
each other!’ ‘THERE the path lays!’
‘The embodied human being, what a
beautiful creature. Imagine alone your abilities to love! On –
spiritual – emotional and – physical levels – you create with your
multidimensional abilities massively productively into the dimensional
whole.
But within you you will find all what you are looking for, what is predestined for the illumination of your spirit.

For what you call the spirit world, this amazing form of existence and
its opportunities is a most important and necessary counterballance in
the dimensional whole and the battle that i see between light and
darkness! Activate it!’
ACTIVATE THE BETTER HUMAN BEING IN YOU / THE STONE IS THE SYMBOL / AND IGNITE THE CRYSTALLINE NETWORK / BREAKTHROUGH GLOBALY!!!

(In these strictly private séances in the US the States
M., T., N. and F. became locations of Stone
Owners and Part of the Network. Stay tuned for the Website TO SEE THE
CONNECTION!)

Thanks to all involved, here and beyond.