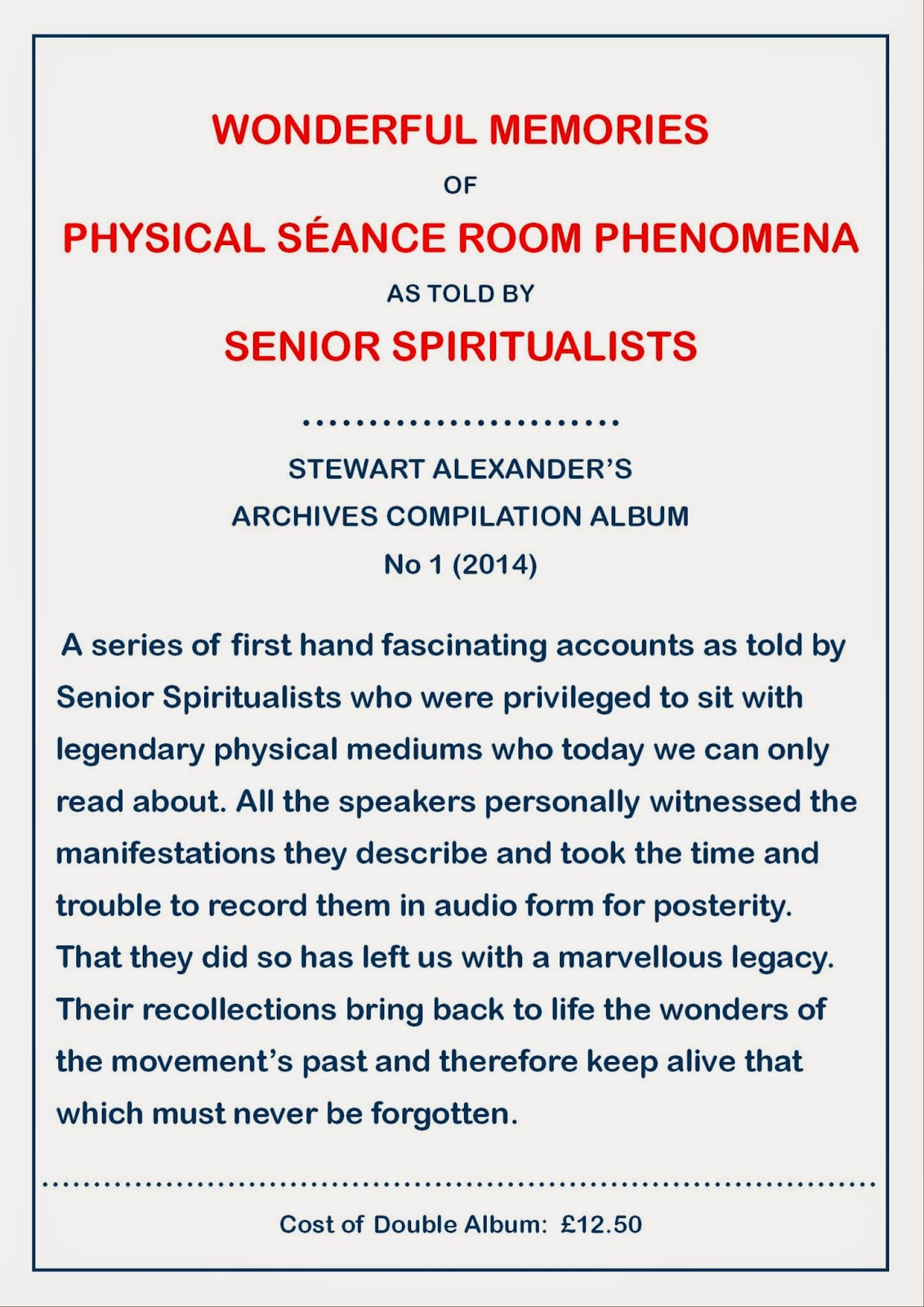 Dear friends of the Felix Circle and of the beauty of Séance Room Phenomena basically,

many of you we have contacted directly in reg. to this issue already weeks ago.
We decided now to inform as well on a wider base here on the blog about it.

Ladies and Gentlemen, a personality everybody of you has heard about is a legend and icon already during his lifetimes, in regards to his honesty, dignity and quality he has brought forward during his ‘public’ years, the grand ‘old’ Gentleman of Physical Mediumship on the British Isle, MR. STEWART ALEXANDER.
His work is not only an example for me and every other Physical medium working today, Stewart was always eager to enrich the community and the general public as well about the wonderful world of Seance Room Phenomena since he was Archives Officer at the Noahs Ark Society.

So what is it about today? I can tell you it is something amazing: It is besides the known written reports available the most amazing accounts of Physical Mediumship History.

Let me overgive to Stewart himself:


In the 1990’s I was, for some years, the
Archives officer and for a while the President of the now defunct Noah’s Ark
Society for Physical Mediumship.  Prior
to that, over a period of several years, I had been most fortunate to meet, on
a number of occasions, elderly Spiritualists who some years earlier had sat
with legendary Physical Mediums who by then we could only read about.
However, when relating to me their experiences it was almost as if they were
telling of séances which they had attended the previous night as against
10/20/30/40 and in one case, 50 years earlier. Such had been the impression
made upon them by what they had witnessed that those séances had been indelibly
stamped into their memories.

Always, as I listened, it had invariably
struck me that I was as close to living history as it was possible to be.
When, therefore, I became the Societies
Archives Officer, I determined to appeal to such people to come forward – to
make contact with me and arrange to leave on record audio recordings of those
wonderful inspiring sittings that, in past years, they had been privileged to
attend. Now, no matter how harsh this may seem, the fact is that one by one our
forebears were leaving this earth and taking with them their recollections and
one by one their experiences – their stories – were being lost to our movement.

So – in an effort to address that situation
and catch them whilst there was yet time, I placed, on behalf of the Society,
an advertisement in its monthly Newsletter and in various Spiritualist
publications inviting and imploring them to send in their invaluable accounts.
Pleasingly many responded and eventually I was too select a number of them
which I grouped together onto a single cassette under the heading; ‘The
Physical Phenomena of Spiritualism – Archives Compilation Tape 1 – (1995)’ and
this was subsequently marketed by the N.A.S. for its members and understandably
proved to be extremely popular.
However, with the later collapse of the
Society that single cassette was to be the only one produced with the result
that so many voices from the past were for many years to remain silent and
unheard upon my library shelves.
Then, one day, two years ago, I was working
at my computer when my eyes fell upon those cassettes and suddenly, like a bolt
from the blue, it struck me that I had been guilty of failing to fulfil the
wishes of all those contributors.     Inadvertently, I had
been singularly responsible for failing in my duty to them to keep their
inspiring memories alive.
Thereupon I decided to select a number of
them – take them with me to my next Seminar, and allow the attendees to hear
those voices from our movements past.     Imagine then my
absolute horror when, on the occasion of my seminar talk, with the first
cassette loaded into the machine, and everyone eagerly waiting to hear it, I
pressed the play button and the tape snapped. However, what seemed at the time
to be a literal disaster actually turned out to be a blessing in disguise for I
-realised then that all such tapes in my
supposedly ‘safe keeping’ would, with the passage of years, have been similarly
deteriorating!
Enter; Lew Sutton (friend of many years)
who, with the necessary equipment, graciously volunteered to take on the
project of transferring all the cassettes onto CD and, in the process, clean up
the sound quality which, on some of the tapes, was far from good.    Anyway, it was when Lew was working on the
old Ark compilation cassette that he telephoned to say that unfortunately the
final accounts would not fit onto the one CD and in consequence they would have
to be carried over onto a second one.
Instantly, it
then occurred to us both, that if we made a further selection of accounts to
follow on beyond the Ark recording we could fill up the second CD and perhaps
issue and make available to anyone interested in Physical Mediumship a double
CD album.
Now – following months of work – months of
engineering by Lew and the recording of new applicable introductions etc. the
project has at last been completed with a lovely Review of it being published
within the October issue of the Psychic World.
To the best of my knowledge, with the
single exception of that Ark cassette, I know of no other such multiple
recording within or outside of our Movement.  I therefore believe that not
only is this present album historic but it is also unique and it is my absolute
intention to make it widely available both in this country and abroad. I
believe it to be ‘that important’!
To me this is a duty to keep faith with those
contributors who, prior to their own transition, took the time and the trouble
to record their verbal accounts for posterity so that they would not be lost to
our present day and our future movement. It is my firm belief that what these
Spiritualists of yesterday have to tell us will prove to be educational,
fascinating and extremely interesting to all listeners and hopefully this album
will be followed by others.  Listeners will enter into the séance rooms of
mediums such as; Helen Duncan, Alec Harris, Frank Havard and William Olsen etc.
and the past will once again live as the contributors tell of their wonderful
experiences.
Little wonder then that I entertain the
hope that all interested parties – Spiritual or otherwise – will take the
opportunity to hear of these past séance room wonders from the people who
personally witnessed them for I am of the opinion that to give yesterday’s
Spiritualists a voice in our movement today is extremely important to our
contemporary movement which sadly, remains largely ignorant to the séance room
wonders of the past.
And finally, the albums can be
individually ordered at the retail cost of £12.50 plus postage and packing  and they are also available at a discount
price to any church or organisation who would like to stock them for their
members and these would, when required, be provided along with an advertising
poster.  Additionally, by request, I would always be happy to consider
visiting venues to present talks in respect of the album and what motivated
their production.
Also included (when applicable) would be
the story of my own 45 years within the Spiritualist movement, which I hope,
will prove to be interesting, educational – and – dare I say;
entertaining!
Additionally brief details of my many
experiences within the Physical séance room and also my gradual development of
physical mediumship over a fifteen year period plus a brief account of my
public work this past 20 years. The talk would last either 90 or 120 minutes
whichever is preferred!
……………………………………………………………………………………………………………………………………………………………
‘Physical Séance Room Recollections’ can be
ordered from; Con-Psy Publications, PO Box 14, Greenford, Middlesex, UB6
0UF.   Tel; 0208 903 1993 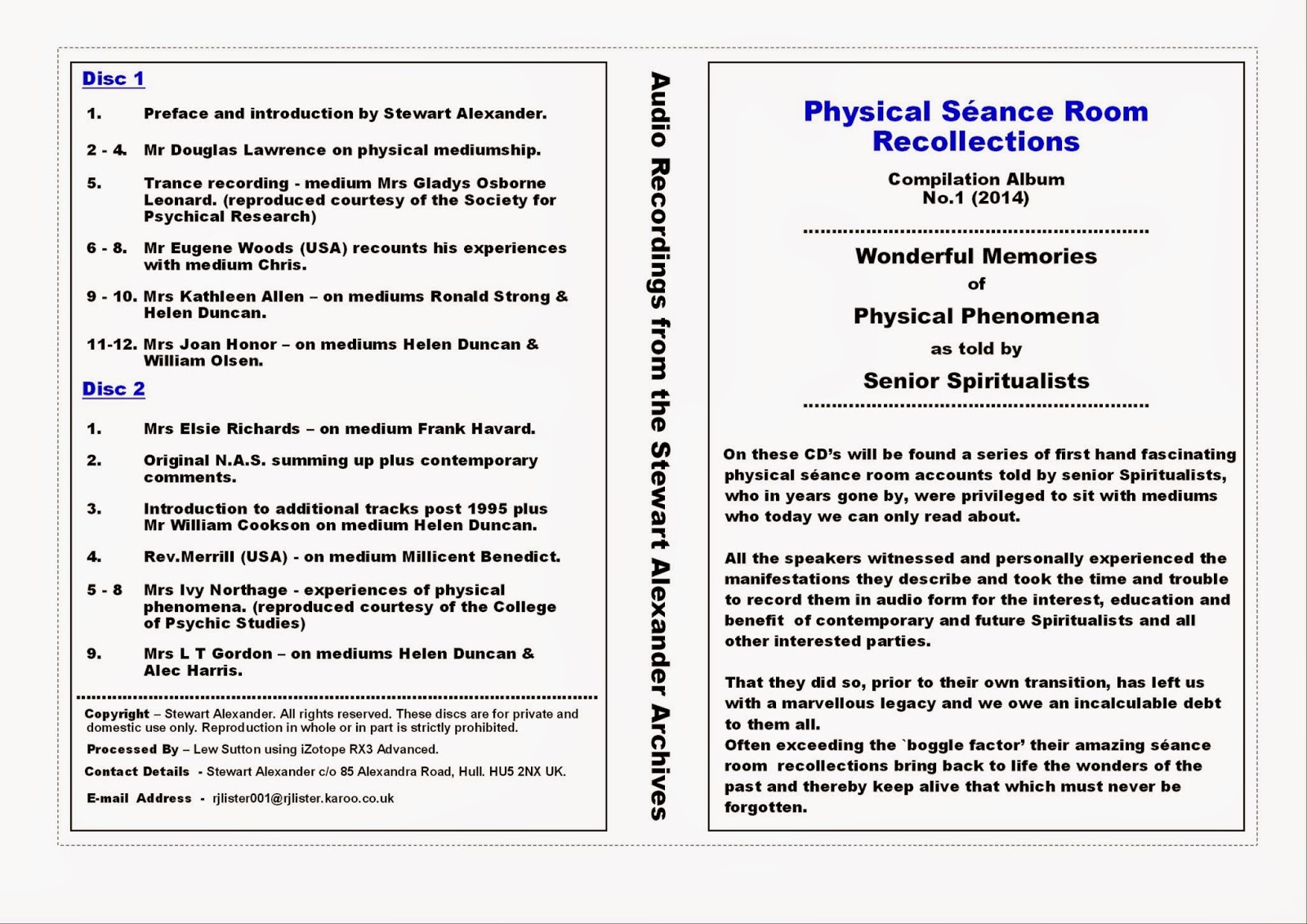