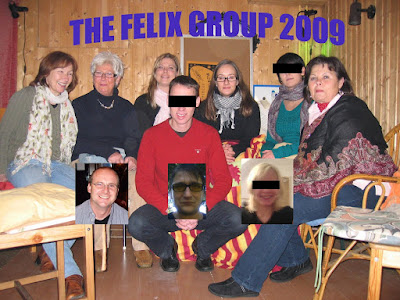 Picture: The Group one week before the “Albert”-Apport

“There were a lot of Mediums I had Contact to in my professional work as main host and organizer of the Basler PSI-Days and of the Basler-PSI-Association, but I cannot remember one giving me a message that I was able to immediately regard as a message actually for me from a deceased friend – and to identify it in every sight, choose of Content, Choose of Words, Order of Words as message actually from him. Yes and finally the Signature on the strange Message I was immediately identifying – and was later discussing it with another person, that knew Albert very well. Its not only the Signature, the complete Writing is of high resemblance to Albert Hofmanns Scripture.” Lucius Werthmueller sits baffled in the Seance Room and looks at the apport, that was placed “somehow softly” into his hand.
The 13th of January a Guest Seance for Lucius and Sabine Werthmueller of Basel/Switzerland the Felix Group was conducting and as always for Guest Seances the Spirit-Controls and in particular, the main spirit control, that revealed himself with the name of “Raphael” (a worker in a German Carpet Factory in the era of Industrialisation), was asked and in a sense conditionalized to bring the whole range of Phenomena forward especially for them, who have travelled more than 400 km.
So the Group was hoping for
multiple levitating tables,
touches,
lights,
objectively considerable drops of temperature and breezes,
hands forming under the table and touching sitters,
Masses and Shadows that move through the room block the light from illuminated plaques
and more,
but the conditions weren t as well as we were expecting it.

Sitters were ill, Sitters had headache, the pressure was enormous to show friends, that have travelled 400 kms the actions of the Spirit Team.
The Control had announced earlier something was prepared for the Guests and so everybody was expecting a powerful Seance.
Unfortunately it turned out to be a Seance with an unusual low energy-level, what was very early recognized by the Sitters, that somehow tried to outbalance it.
But nothing turned out to be succesful.
After 1 or 2 loud raps inside of the table even the Table-Movements weren t by far not so powerful as usual and not until after two exhausting hours, Raphael declared, the mixture of human energy was too varied to use them in a focussed effort for Physical Phenomena. The Circle was overcrowded and we should exclude some of the sitters. After that was being done the atmosphere seemed to change for a few minutes and the table started to float for a short but unmistakable period of time.

But after within the following 20 minutes, when the Control again announced something in the “tube”, that wasn’t possible to deliver to our Guests, it again turned out, that there probably nothing would follow, the complete Circle once more joined around the table to finally close the Sitting.
That moment Raphael sent the message “Everybody hold Hands”, but the receiving Medium did not forward that to the Sitters, although he himself brought his own hands both in contact with his neighbors, when something was audibly hitting the table.
Important is, that after the object was landed it was somehow softly brought into Mr Werthmuellers hand, as he reports.
When Lucius opened his palm it revealed a sight the Sitters encountered not for the first time. 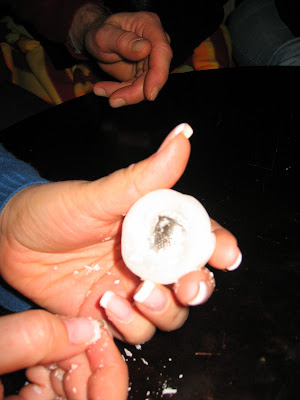 Picture: Although the Group was harshly critizised for their immediate opening of the “Spoon-Wax-Message”-Apport, we decided, after several photos were been taken to open the waxy object.

Considerably larger than the legendary “Spoon-Wax-Apport with personal Message for Guest Sitter Kurt St., Curator of a Museum in Bern/Switzerland”, a piece of Wax was again received – with some kinds of hyroglyphics on its side.
Inside was an antique thimble containing the Message, shown in the Photo.

Picture: The Message was again a tiny rolled paper, saying: “LUCIUS, LOOK AND BE AWARE OF THIS WONDERFUL NATURE. IT LIVES. I LIVE. ALBERT.“ 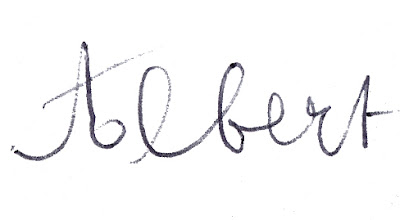