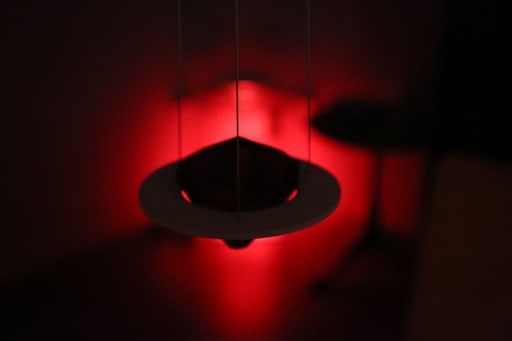 Another report about a sitting with International Guests in Lugnorre, Switzerland – written in a joint effort by the sitters afterwards:
Amazing experience with K.M., physical medium from the Felix circle, in Lugnorre, at the ‘Circle of primordial lights’ homebase, Switzerland. This report was taken from the recording and written together by the sitters from their recollections. The séance took 1 hour 37mins.
The séance room was 4×5 metre and the table used was a white picnic table. There were 10 sitters including the medium and his wife. Julia was placed in the corner to control the light and was unable to leave her place without requesting sitters to move out of the way. The cabinet was about 2 metres away from the sitters and the medium, who sat with his back towards it. In the cabinet was a chair with a trumpet, tambourine and a small native American Indian rattle and a small bell. Tambourine and trumpet had luminous tabs. Under the chair were white pages of paper and a pen.
Light off and sitters started singing. Half way through the second song an object was placed on the table first undetected!  When we investigated it was a little table from the other side of the room, with a table runner, a candle, a rattle and a handheld small drum on it. All items remained on the little table when it was moved. From the medium, who sat tight with the others around the table, the table stood in the corner to the right of the cabinet in its back. K.M., whose phenomena are knowingly related to these paranormal transports, is used to sing or speak loudly and permanently from his  seat  meanwhile the upcoming events were seemingly somehow parallely happening.
We saw yellowish sparks of light from now on frequently and then we heard 2 beats on the big drum being played, positioned on the opposite side with of the cabinet. The table then lifted about a metre off the floor. A small desk bell, which the organisers had bought in the morning, was heard ringing on one of the cupboards around the sitters  and then fell on the floor, from where it was by unseen force picked up and put it on the table also.
The big drum was suddenly played loudly inmidst of the circle above the table and then dropped on it. Then many knockings were heard all around the room., walls and ceiling. The instruments were thrown of the chair in the cabinet and the table again lifted very high of the floor. A small bell landed on the table, then the trumpet came out of the cabinet above the sitters and hit the wall – fell down.
Small and large Slim Spurling rings (Light-life tool) were taken from under the cupboard and then found on the floor between the sitters.
The intelligence acknowledged the sitter’s gratitude by knocking in response on the roof five times.
Sitters smelled smoke of sweet grass and sage even though they were not lit in the room. The tambourine came from the cabinet and hit the floor, a small break and then with strong energy the tambourine moved at high speed through the room.
A sitter proclaimed someone was standing next to her and then she felt a cloth moving over her face and then we felt and heard a strong breeze, made with the cabinet curtains we assume.
Then the cabinet was opened and fastened to stay open. The medium complained that someone pulled his hair and at the same moment a sitter opposite stated the same.
Then the trumpet left the cabinet again and this time circled around the table above the sitters heads for full 30 seconds (recording). The medium asked for the tambourine to land on the table and the tambourine was seen and heard to come from the cabinet and hit the table hard and dropped on to the floor between 2 sitters. When the red light came on, the table floated up, more than a meter off the floor, while all sitter’s hands were seen on top of the table.                                                       The light was switched off and a loud energy crackling from the direction of the cabinet was heard by all sitters.
Then we heard a strong bang and a sitter said she had a stone on her lap. When we investigated, there was a whole in the table (bang) and the ‚bloodstone’ from above the table had come out of its hanger and hit the table. Also now, there was the chair from the cabinet standing on the table. 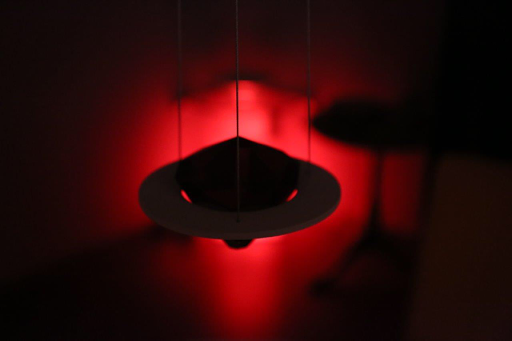 Picture: The hanging of the Alchemical Bloodstone collapsed and released the heavy artefact, falling down, hitting a hole into the table…
Suddenly, the sitters all observed a light  flashing up (like from a camera) in front of the medium and then the flashes repeated every 5-10 seconds 15 times (total about 2 mins) and the flashes seemed to be white at the beginning and then seemed to originate in a blue spark moving into white. The medium stated later, that a few seconds earlier he had felt something like a moist warm cloth being wrapped around his upper body and then he fainted. We observed a considerable mass of  ectoplasm coming from the mouth of the medium, who held his cupped hands up in front of his solar plexus area about 25cm away from his body. Ectoplasm was building on his hands and was also seen forming a covering over the mediums head, during the light flashes. The lit up scene with the blueish energy looked very special indeed. The light somehow illuminated the strange mass – or was the mass pulsing light itself? It seemed the spirit control was trying to speak, but then the medium returned and the energy seemed depleted. Table kept tapping one leg strongly on the floor for about 3 mins and the medium closed the circle. Sitters exclaim that they are extremely grateful for this amazing experience.