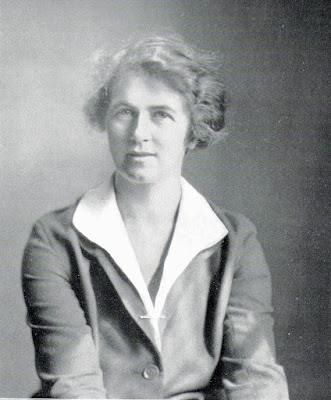 The Surgeons wife Margery Crandon was one of the most tested mediums of all times. With no other medium so much instruments and machines were implemented to research the benchmarks of her mediumship. No matter how difficult the experimenters created their tasks, under the agency of the deceased brother Walter Stinson (her maiden-name), Margery produced mediumistic phenomena under every test-condition. 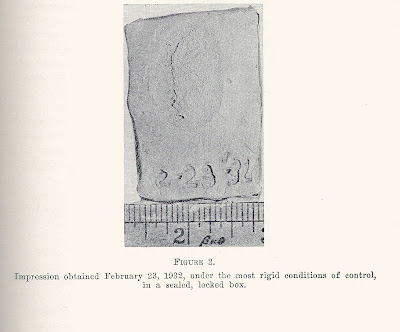 Walter was in contact mainly through his voice, which was heard as a direct voice coming sometimes from behind the medium, sometimes from above the table and sometimes from somewhere in the room – and through his hand. Not only in many photographs this hand could be seen in different stages of completion, built out of ectoplasm, but also in hundreds of fingerprints, left in wax under the most rigid controls. Original fingerprints of Walter were achieved through his military documentation-data and could be compared with the appeared mediumistic ones. 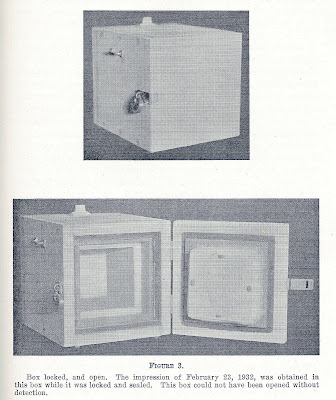 One of the many gadgets being used. The above displayed fingerprint f.e. (figure2) was produced through supranormal agency inside this closed and sealed box, manufactured only for that purpose. 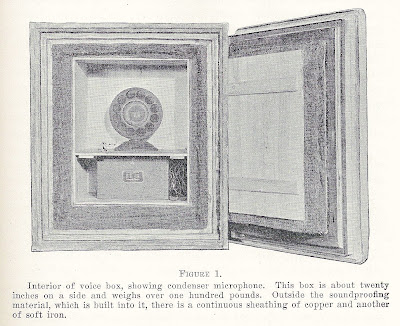 Another box, the “Voice”-Box, especially created to exclude that anyone in the seance room enacts the Walter-Voice. Through the enclosed microphone the “Direct Voice” was heard in the Seance room amplified with loudspeakers. 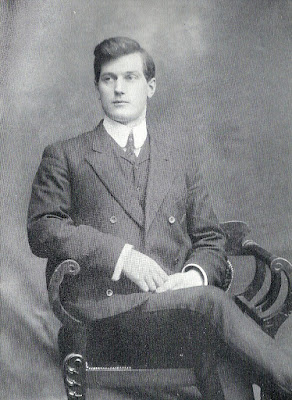 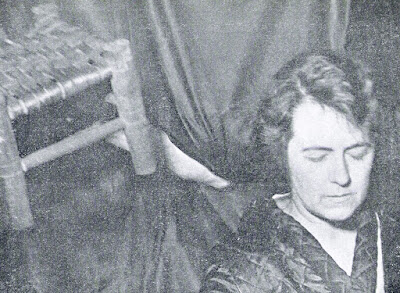 One of the mysterious more seldom published photos, taken by the engineer Thorogood, who was one of the main Researchers of the ASPR. Produced while a seance, conditioned for telekinesis, the photos revealed possibly somekind of a ectoplasmic rod or something like Crawfords “cantilevers” urging the stool to levitate unto head-height. Margerys hands were both held by the experimenter. 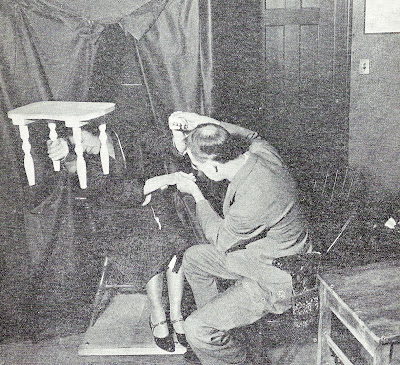 A few instances later this also most seldom published photo was taken. Thorogood sweared, no one was in the room but the medium and him. The engineer controls the photographing apparatus with his feet. The doors are shut and closed and the only key is in Thorogoods pants. 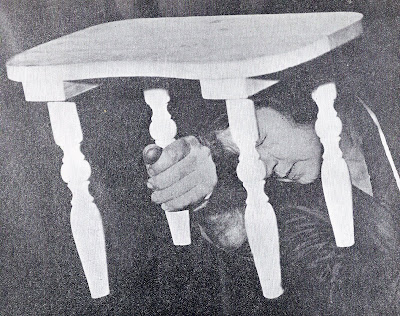 Coming out of a unknown white or grey mass a completely formed left male hand showing up coming out of the cabinet area behind the medium. The cabinet curtains were wide open over the whole period of time! Again the room was only lit by a weak redlight and the experimenter flashed when he recognised the stool levitating. 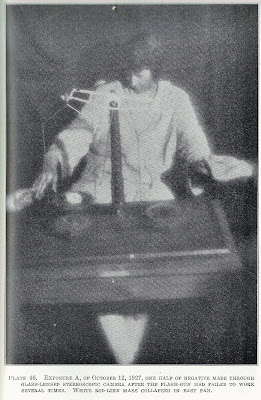 During experiments to influence a weighing machine, a row of photographs could be taken showing again the mysterious substance Margery protruded in masses on many of the well-known photographs. On the control photographs of the weighing-experiments researchers were surprised to find there little amounts of the substance displayed on the experimental scale, seemingly acting autonomous, like climbing on the scales suspension. 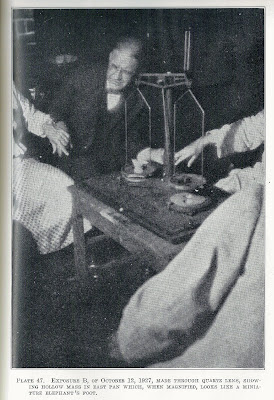 Several times an object was displayed the researchers refered to as the “elephant-foot”. 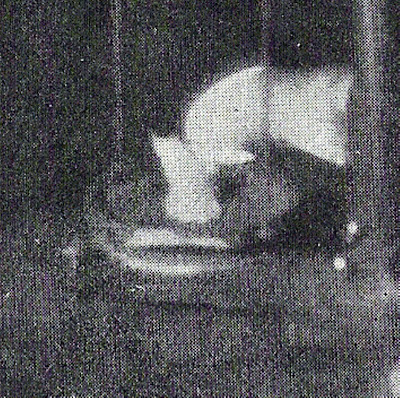 The “elephant-foot” taken for the first time the 12th of October 1927. 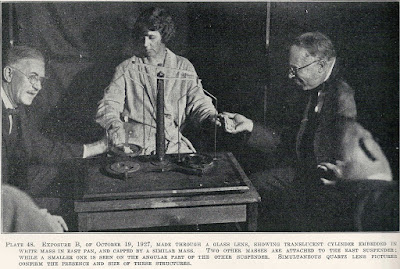 The 19th of October 1927 a mysterious translucent cylinder stuck in an ectoplasmic base. At the same time the scale showed clear signs of weighing-action. 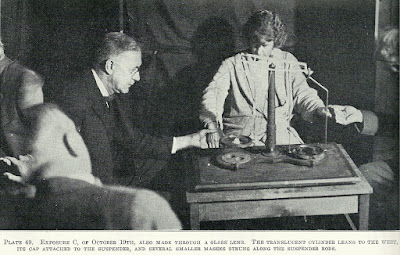 Then at another instance the cylinder was photographed leaning to the west. Besides small amounts of ectoplasm seem to be moving along the scales suspension rods. 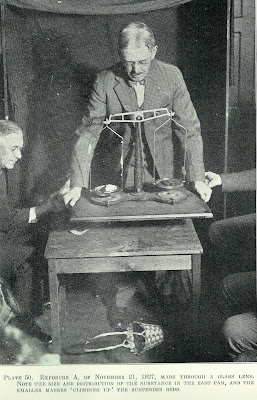 A month later the substance displayed differently and again parts of it seem to climb upwards at the east-suspension-rod. This time the medium was separated through one of the investigators standing the whole time between the medium and the substances on the scale. 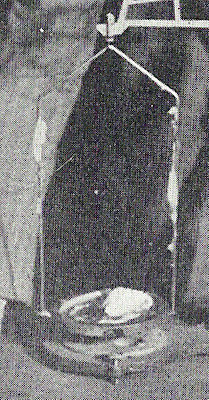 Magnification of the above photo shows clearly the white or grey substance. Rests of it clinging at the metallic suspension rods. 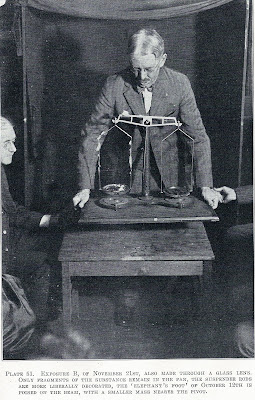 A few instances later something fascinating has occurred. Without the possibility for the medium to manipulate anything the mass now has desintegrated and only rests of it seem to crawl on the weighing plate of the scale. Suddenly the “elephants-foot” is back again positioned standing on the top of the scale and the amount of the climbing parts have changed also. 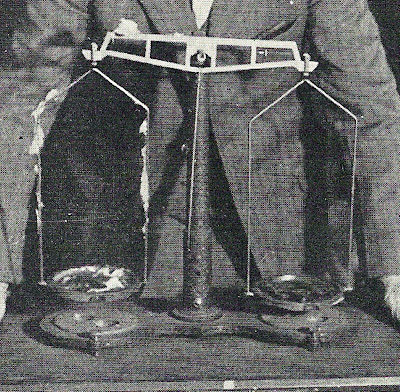 Blow up of the above photo in detail. 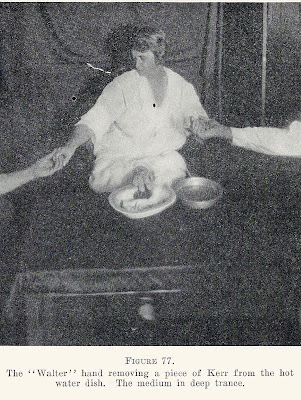 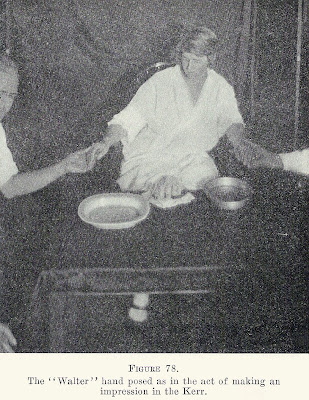 And again a fingerprint will have been achieved after the hand left it in the wax. 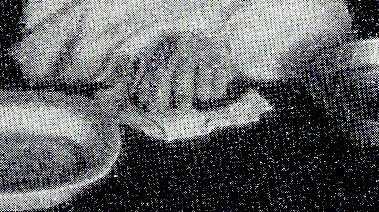 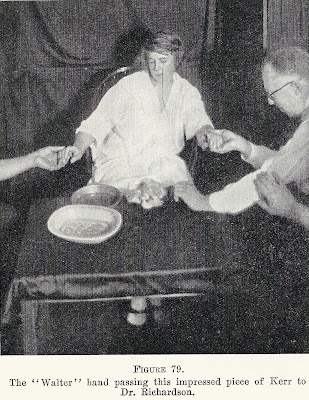 Under the table we see Margerys both feet, while walters hand passes the imprinted piece of Wax to Dr. Richardson. 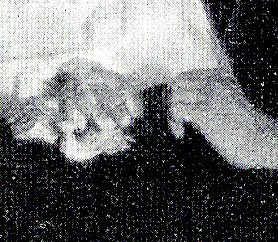 The hand looks mutilated or s.th. but showed an ability of a relatively powerful grasp in the upcoming photograph 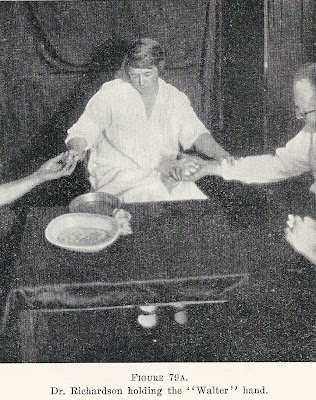 After the imprint was overhanded the mediumistic produced hand shook hands with Dr.Richardson. His hand is controled by the entranced medium, the “Direct Voice” of Walter is speaking over the whole process. 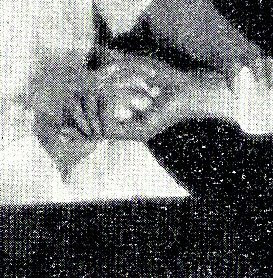 One of the most impressing moments in the whole investigation of Margerys mediumship. The “Shake Hands with a spirit hand”. 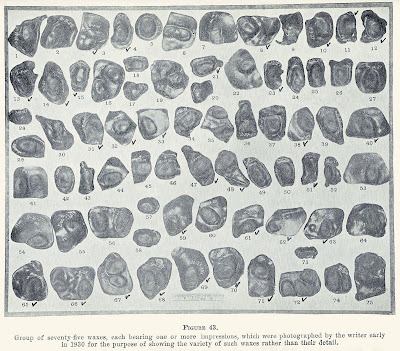 Only a few of hundreds of achieved fingerprints, the entity “Walter” produced through Margerys mediumship. Not only that Walters thumb was easily to identify because of a large scar, the imprints appeared in many mysterious versions. 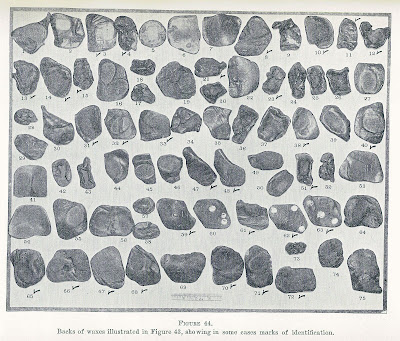 The fingerprints often appeared as “negatives”, inverted or mirrored ones, what riddled the researchers much. Walter explained once the conditions that were responsible for that.
All in all one can surely assume that the Margery Mediumship shall be counted to the most evidential and eclectic mediumships of all times. But despite the ASPR investigated nearly a decade, they didn’ t want to publish a final statement regarding the genuiness of Margery.(end of article)