PART 2 OF THE LOST MIRABELLI MATERIALISATION PHOTOS (with many photos)

Welcome to Part 2 of the “Lost Mirabelli Photographs”. All who are familiar with the contemporary witness accounts know, why for researchers of the paranormal it is so highly interesting to gain access to all the experimental photographs to compare them with the rare non-portuguese accounts of his mediumship that sound so marvelous and only could be compared with the productions of Home.
The publishings Part 1 and Part 2 here on felixcircle.blogspot.com are the most complete collection of Mirabelli-photos ever published on the internet.
Some years after the famous seance-accounts some international researchers, like Driesch of Germany or Dingwall of Great-Britain, were visiting the medium that seemed to be very exhausted. In a few spontanous sittings more or less distinct telekinetic movements could be observed but none of the spectacular productions, that made Mirabelli so famous in Europe. Unfortunately the invitation of Schrenck-Notzing and others to come to Europe could not be realized because of the early death of the Medium 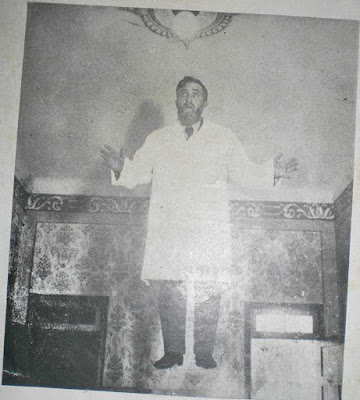 One of the most controversial photos out of Mirabellis mediumistic production era. Allegedly showing the medium during one of his many spontanous self-levitations. In 1992 the well known researcher Guy Leon Playfair found traces of a retouchment under the mediums feet what would be the only allegation of fraud against Mirabelli ever charged 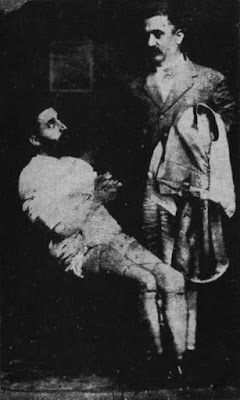 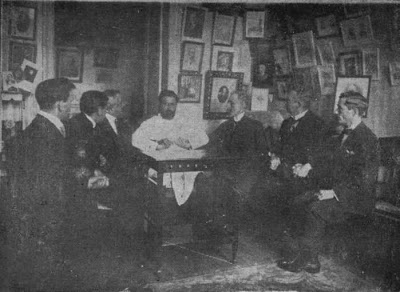 Showing a typical situation at the Academy of Psychic Studies Cesar Lombroso (São Paulo), in full daylight the medium can be clearly seen by all attending with both hands controlled 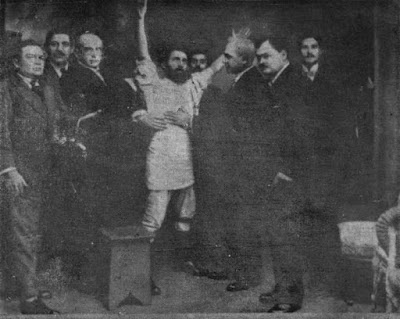 Before a new sitting was made the medium is here carefully examined by Srs. Drs. Carlos Niemeyer and Dr. Alegretti Son, appraised doctors; the baron of Ergonte, writer and known researcher of the paranormal; Dr. Sylvio De Campos, lawyer and figure of the São Paulo Republican Party; Dr. J. Motta, director of periodical “São Paulo”, lawyer and journalist, and other gentlemen of high social position. 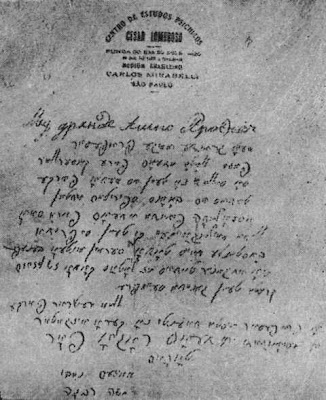 Mirabelli produced trance writings in 29 languages. Many of them were essayistic writings over many pages on philosophical or political topics of the languages country. Witnesses describe that the writings were produced in an incredible high rate of speed 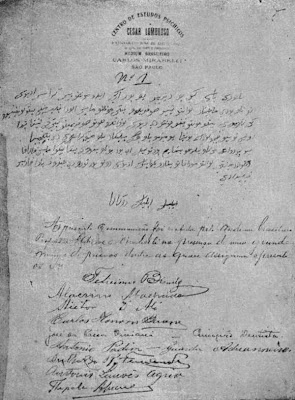 Automatic writing in Arabic. Benath the signatures of the witnesses 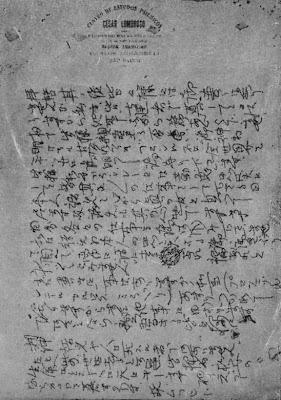 The writings were produced while the medium was in deep trance, often with eyes rolled upwards 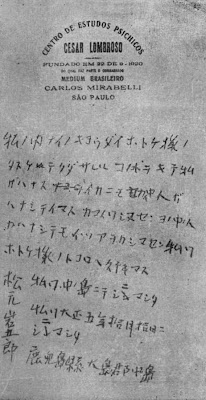 Mirabellis trance writings refered to many political, social and scientific issues exisisting in the countries of the specific languages 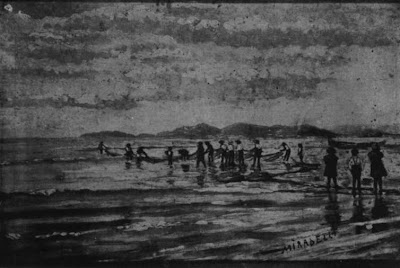 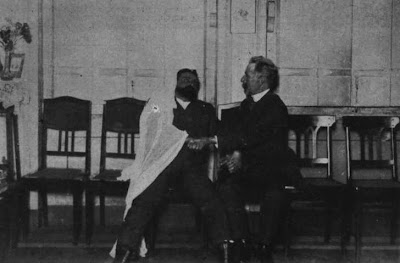 When de Castro observed the appearance of a white veil on Mirabellis side inside the experimental area, what often pronounced a Materialisation process of a full spirit form, he calls further witnesses from the observation area to sit with him and Mirabelli 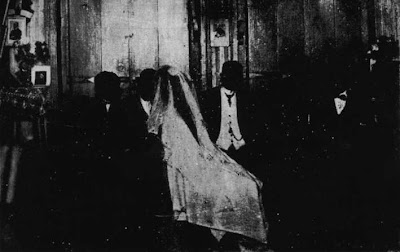 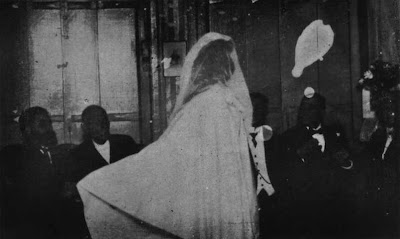 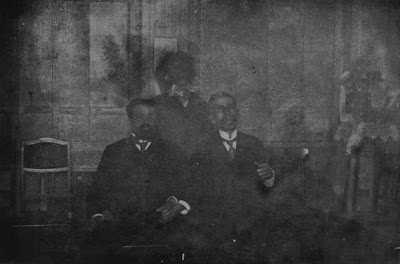 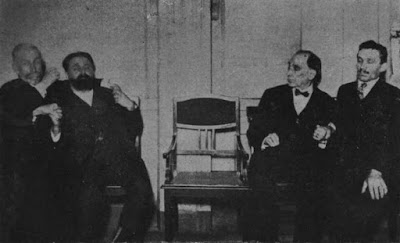 Allegdly taken in the very moment the phantom is vanishing into thin air. Beside sitters look surprised in the direction, where the figure was sitting seconds before. On the other side of the now empty chair we see Mirabelli in controlled condition through 2 sitters, probably de Castro and de Goes 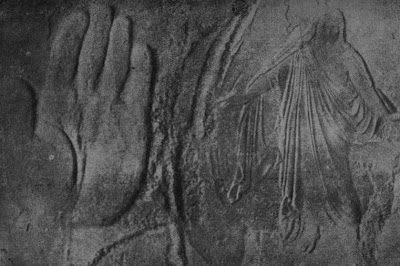 Spontanous development of this image in plaster while a sitting organized by one of Rios Police Directors Dr. Armando Franco Soares 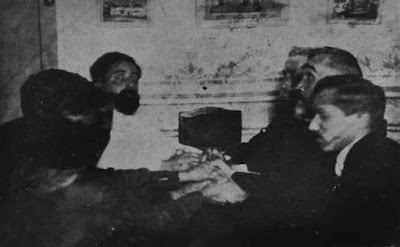 On the empty chair to the head of the table in the Academy of Psychic Studies Cesar Lombroso, São Paulo, to the side of the medium immediately before this photo was taken a full form had vanished completly under the eyes of the acdemic sitters 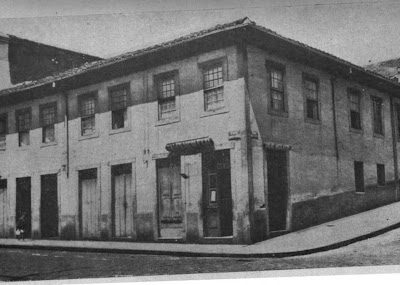 House where the medium Mirabelli was born in the “Rua Amando de Barros”, Botucatu (São Paulo) 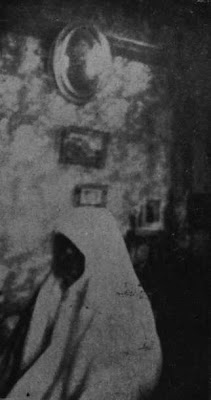 Materialization of a female spirit, taken in Mirabellis house in Rio. 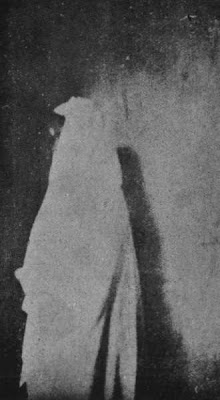 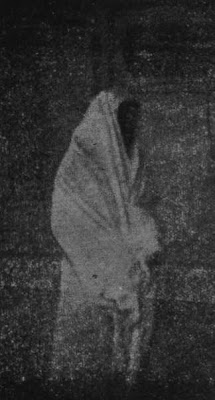 Photograph by Dr. Thadeu Medeiros. According to him this photo was taken the 20th of July 1934 at noon. Slowly descending from its floating position is the phantom of a nun Mirabelli meant to identify in this and other photos (of better quality) as his deceased sister. All together 4 times this phantom showed itself over the producing-period of Mirabelli 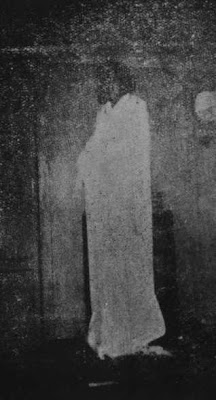 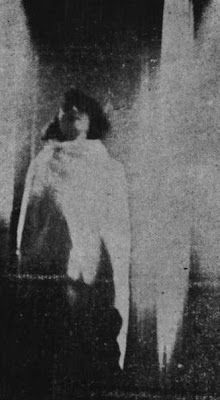 The completed materialisation of Chamára Zabelle slowly begin to dance, because she was a known dancer before she died in London a few years before 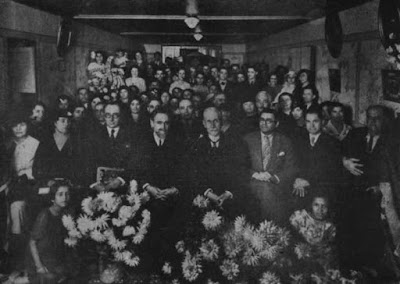 Showing the hall of the Brazilian Psyichico Institute (Street of the Native land, 490, São Paulo), where many Mirabelli Seances were held, because of its 25th year of existence. Photographed around noon between the gifts and to the medium right are Dr. Eurico de Goes, Dr. Carlos de Castro, to the left; Professors Chaves and Berti and ladies; Colonel Fernando Sonnewend and family; Lieutenant-colonel Marinho; Mr. Haroldo Cross and lady; Mr. Affonso Martins and lady; Mr. Oscar of Oliveira Borges; and many more people known in the Rio society 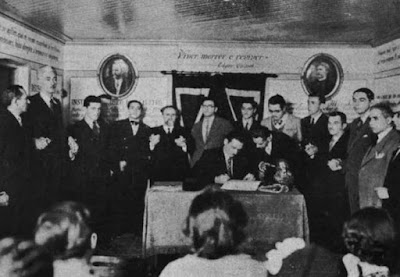 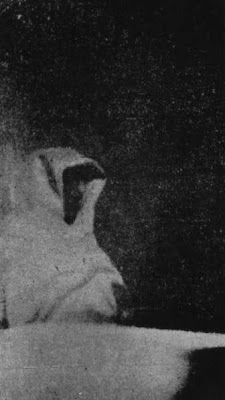 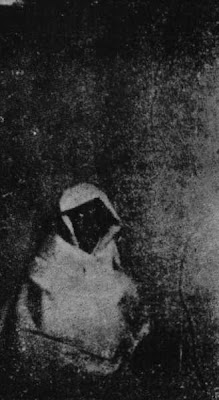 Photograph of the materialisation of the deceased lawyer Dr. Abílio de Carvalho by Professor de Goes. This photo show characteristics of the deceased like the eyeglasses. The full form is sitting in a chair. Allegedly the attending family of Abilio was able to identify him. 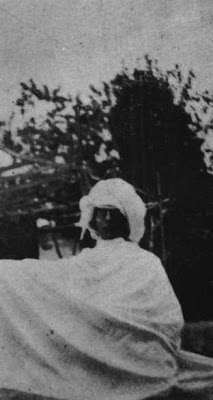 Materialized Hindu in full light of the day in the mansion garden of the medium in Tucuruvy (São Paulo). 1rst Photograph 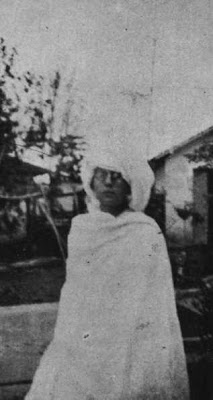 2nd photograph of the Hindu materialized in the garden of the residence in Tucurury (São Paulo). Shortly after this photo was taken, the figure starts to rise up into the air like many of Mirabellis Fullforms and vanishes gradually 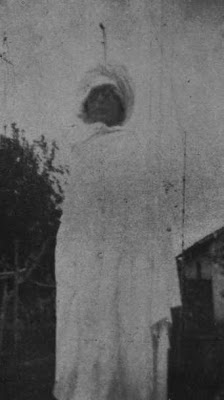 3rd photograph of the materialized Hindu during the day. In this snapshot the figure floats 3 – 4 metres above the ground. 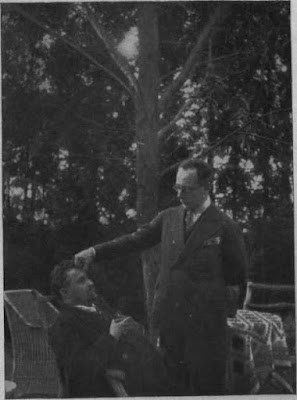 Dr. Eurico de Góes giving the medium magnetic passes underneath the trees of the Villa Pritze, in São Paulo Brooklyn (São Paulo) in the afternoon hours.