EINER NIELSEN SENDS MESSAGE IN HIS OWN HANDWRITING IN OLD-DANISH DICTION TO DANISH MEDIUM AND RESEARCHER MARION D. JEANS AT FEG SEANCE

Home » EINER NIELSEN SENDS MESSAGE IN HIS OWN HANDWRITING IN OLD-DANISH DICTION TO DANISH MEDIUM AND RESEARCHER MARION D. JEANS AT FEG SEANCE

(Marion Dampier Jeans is a medium and researcher, who lives in London, and is among other activities especially involved in the mission of bringing mediumships of the nordic regions of Europe to the publics attention. Besides Denmark, where she was born, she is very active in Sweden, Norway, Iceland and Greenland. (Please visit her website!)
This respected and very experienced woman wrote a report about the FEG Seance she was attending the 30th of November in Hanau Germany!
Seldom there was a report that described so extraordinarily the bewildering mysteries of the FEG-Seances in Hanau. ) 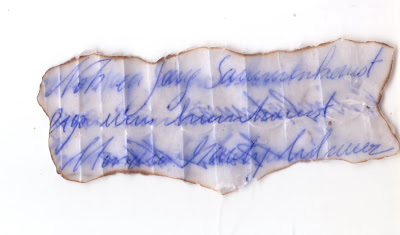 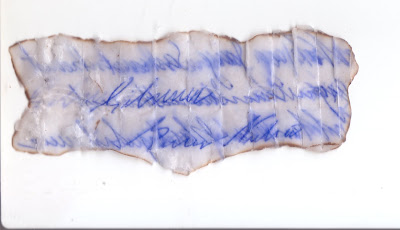 I was visiting Germany the 30 Nov. 2010 with business man Søren R., struggling to reach Frankfurt from Copenhagen, Denmark.

Flight after flight was cancelled in Copenhagen, we had to wait for 12 hours at the Airport and extra 30 min. on the runway in Frankfurt, only to find our suitcases were not with us… – and in fact did not more arrive at all during our stay in Germany.

I have been involved over many years with physical mediumship and have seen the development of many mediums.
An own physical circle we had for many years, the “Nordic.Circle” in London.

I was looking forward to meet the Felix Experimental Group (FEG) and spirit leader “Prof. Hans Bender”.
The physical circles I have attended were inducing different types of phenomena like
“Trumpet” levitation, partly materialization of hands on illuminated plaque, ILP’s (Independent Light Phenomena), independent voice, trance, apport phenomena, palpable touch-phenomena – by spirit hands, breezes of cold air, rapping’s on walls and ceilings, psychokinetic object movement (without the contact of a human agency) and the ringing of different bells.

These phenomena occur in the few active circles today, but can be described as common in a historical overview. Their grades vary in cases, depending on the strength of the circle or medium.

At the FEG were that night invited guests and circle members present.
I sat next to Jochen, the circle leader.
The way the medium went into trance, I never have seen it done that way, exercising a certain breathing technique, for example the famous “Rudi Schneider” was applying also. First listening to this it felt a little strange.

The mediums breathing reminded me of hyperventilating, had a strong and fast rhythm and a considerable loudness, giving off a sort of rolling sound…
The Medium itself is explaining the technique as “an active shamanistic trance”, following a certain technique that is called “holotropic breathing routine”.
Suddenly I became aware, there was another audible breathing running alongside the mediums. This happened when the breathing became more and more agitated.

The first audible voice then was that of “Mr. Hans Bender”, who welcomed us in German, but who did also speak English during the course of the séance.

One of my most interesting observations at the FEG was an energy stream I became aware of, “connecting” the medium with some focus objects approx. 2,20 metres in front of him, on the opposite side of a wooden board on the floor – in the free space the sitters were forming by sitting in a U-form in front of the cabinet.
Within this area, where I “felt” this energetic kind of “moving stream” so strongly, most of the phenomena took place.
This is also new to me!

There were raps in walls and ceiling, independently moving lights and Trumpet phenomena, and the illumination of different hands on an illuminated plaque, more than 2 meters distant from the medium.

The touching through spirit energy was also different from what I have felt in other circles over the years. Many different hands and fingers were touching and poking me from spirit.
It always felt like solid fingers or hands – sometimes I could recognize nails and different hand sizes.

But the touching of spirit at the FEG was very different.
I was touched nearly all the time, from my legs upwards, at my arms and on top of my hair – in fact my hair was played with and being lifted into the air. The hair was taken and lifted from the back even as from the top of my head.
Even when other things were happening I was touched.
So I was with the Cirlce leader e.g. touched at the same time, and additionally raps occurred meanwhile we were touched.

The movement of the touching was also different; normally one feels a touch of a finger or hand, but this was a tingling from a circle like movement, almost a sensation of light vibration and slight tickling. This was not unpleasant and once I had to burst out laughing.
Especially when they were keeping on playing with my head and hair.

On my hand I was feeling a different touch. We were asked before to have our hand close to our bodies! This I did, but during the time sitting with the hands close to myself, I sometimes slowly moved my hands upwards – but always close to my upper body.
First I positioned them on my lap, then higher towards my stomach; I crossed my arms over my chest. The light was off at that time, it was dark and nobody knew where my hands were.

Suddenly there was a touch so different – it felt very alien to me. Not recognizing this at all or had this happen ever before to me.
This materialization was a flat and cold leave-like hand-shape that felt like the touch of a cold rubber plant. The leave like materialization of a hand was moveable but also gentle.
This happened two-times.

After some silent trumpet levitations, starting one meter in front of the cabinet, I was asked to grab for the floating object and grasp it with my hand. I was asked to pull it towards me to feel the power that was controlling it.
Like a psychic rod attached to its end it felt like pulling backwards approx. towards the medium. It felt quite solid and seemed not to be very bendable. My sensation of this force was quite interesting.
I explained this to “Professor Bender”, who confirmed the usage of a psychic rod, a rigid stream of ectoplasm that guided the hovering object.
The entranced medium was under permanent control of “Mr. Bender” and even when phenomena were occurring, the “trance entity” explained the experiments.

At the beginning of the demonstration I was told there was a man with me, not a relative but a man. Some of his facial features were described and that he had passed in the 1960s, but I did not recognize this man. (Later it occurred it may have been Einer Nielsen, who died 1965 and was giving a handwritten message to me in old Danish at the end of the session)
Additionally I was also told there was another man there, a younger one with a nice and open face, curly hair – and the medium later claimed it may have been Indridi Indridason, an icelandic medium, who also wanted to announce something, but could not.

Another main interest of mine concerned the three different forms of ectoplasm appearance, in part photographed by the leader of the circle, the physician Jochen.

The first appearance was thin and netlike, very white in color with some small glimpses of light sparks, like from diamonds! It stretched down alongside the mediums body and was seemingly coming from his mouth-area. At the end of the ectoplasmic form was a flat hand with fingers doing obviously controlled waving-gestures to the audience! This lasted for about 5 second in the red light. The fingers were flat as I felt them on my own hand earlier on! 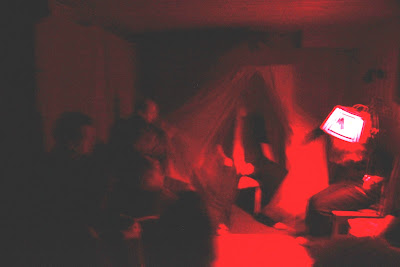 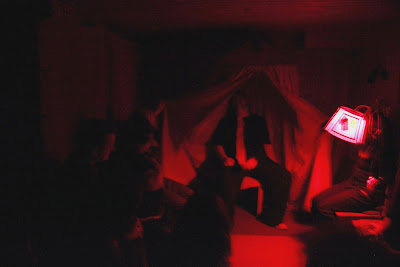 The second ectoplasm I was observing in red light was different from the first! This ectoplasm seemed to be more rough in material, heavier and more grey, it had some holes in it, some long and narrow and some just round, but standing solid on the floor.
This was extracted from the medium as he was bending over (see photos), pulled with his hands from his mouth – I have never seen this before. 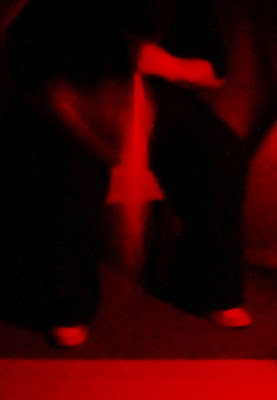 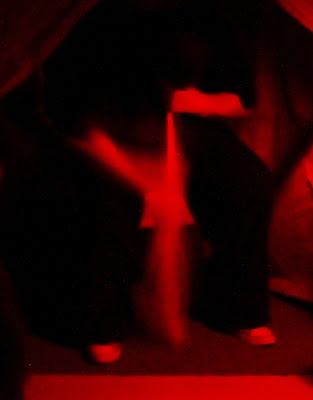 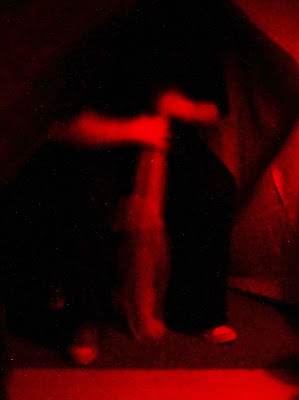 It is also right to mention that when the ectoplasm was extracted the medium was cuffing, choking, groaning and moaning, sometimes sounding, as Schrenck did call it, like a person laying in childbirth.

The last ectoplasm – in a third exposition in red light – was once more different in appearance! It was again white in color, but not as white as the first one. This time it was very irregularly, again with different sized holes, but at the same time more open in its presentation, in different shapes it was hanging all the way down to the mediums feet and outside of the cabinet. Suddenly another hand, white and flat like the first one, came out of a larger mass around the mediums legs. It suddenly moved in a very wavy like manner, sharply visible – and stopped!
The curtains were pulled!
In all cases the ectoplasm was photographed.

I was told from the beginning by “Hans Bender” there were two spirit people present. The first one was a young man of fair complexion (allegedly Indridi Indridason) and another, who died in the 1960s.
I was told later one of them was giving a message through for me.

But when at the end of the demonstration Hans Bender was saying some closing words, I still had not get it.
In midst of “Hans Benders” words, he was saying in red light, the medium cuffed suddenly something violently out, thrown onto my leg and landing on my feet.
This was later on identified as a small statue, resembling some kind of monk, see photo. But when the light came on there was also one of the small wax balls found on the floor, one of these the FEG had many received of, oftentimes holding baffling messages for guests in it. 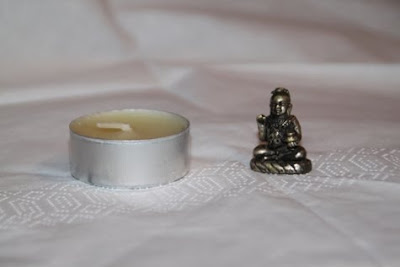 Picture: Sudden oral Apport of a monk-like statue inmidst of closing talk of the control entity

When after the closing words the medium was been left with his two circle leaders to wake up fully and regain consciousness the apports were taken upstairs and the wax ball was opened by a FEG-member.

What we excavated was a small piece of paper, written in Danish handwriting with a signature. After long and intensive research into the message given, after my arrival home in London, we disclosed some thrilling facts and synchronicities in connection with this message.

I first asked an old level-headed and most respected journalist for the largest newspaper “Jylland Posten”, Poul Blak. He knows me and my work well.

First we identified the whole text:
„Nok engang sammenkomst
lige min Hjemmekomst,
Marion mandag hilsner
Hilsner Einer Nielsen“
Poul writes, that the first interesting evidence is, that the substantive is written in a capital letter, a diction, that was in the eighties changed in Denmark, but that was done that way during Einer Nielsens life and times!

Once again a gathering,
It’s like a homecoming
Marion, Monday-Greetings
Regards Einer Nielsen

What neither the reader nor the FEG-Medium could know was that over the last year in my “Kromborg circle” Einer Nielsen had managed to make his way back to our circle!
And on 3 different occasions I have been given a “warm hello” and “thank you” from him!
My circles in London and the “Kronborg circle” in Denmark were all held on Mondays and this is what he talks about: The “Monday greetings” he was giving though in the circle work over the last year!

Additionally Poul and me and others have looked at the signature and this is Einers signature! And additionally he is applying a grammar that was used in his time.
A fact neither I, as a Danish, was aware of (having not lived in Denmark for 40 years).