Picture: The First Spiritualstic Church of Sweden was organizing the event.

When at the last weekend of April 2012 the Spirit Control “Marie” adressed me, announcing a phenomenon “especially for me” I could not forebode, what an extraordinary and rare ongoing a few seconds later through the mediumship of Bill Meadows would be unleashed!

It was Bills first Seance at the “Mediumistic Weekend” in Asa, Sweden, organized by the tireless Rev. A. Hindstroem of the ‘First Swedish Spiritualistic Church’, that was extremely strong in a whole, probably the most strongest Seance I have ever witnessed with him and there were a few I attended!
Bill and me were invited to give Physical Seances over the weekend, ectoplasmic based and energy based ones and like last year the Seances were very well perceived! 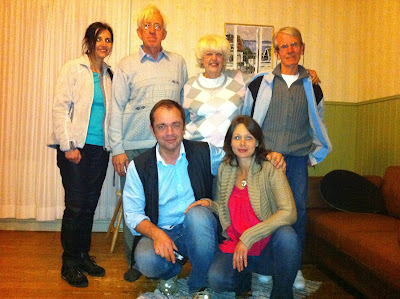 In the meantime “Marie” had asked for the red light on and Colleen, Bills wife and most sympathetic circle leader, did so and we all saw Bill sitting, strictly bound at legs and arms to the chair, in the cabinet.
At the Beginning of the Seance it had not taken 5 seconds after the lights were being switched off that an illuminated plaque levitated, objects were taken and thrown, faces appeared above the plaque and all the other amazing features the playful spirit Team around “Marie” and “Father James” were installing at that marvelous evening and for which Bills Spirit Team is so well known!

So the light was back on now and we all saw Bill sitting in his chair!
“Now look”, Marie said!
Bills right hand started to do wave-like motions, hold close onto the arm-rests of the chair by the broad velcro-binds around his wrists, secured by cable-ties.
First I thought it was a visual illusion because of the red light. I stretched my head into Bills direction, while sitting besides Colleen, slighty to the left body-side of the medium, on a perfect seat to observe.

The red light was illuminating the scene brightly, when something so strange and bizarre happened, that it is hard to describe. With the moving gestures he did with his hand, the hand suddenly changed its appearance dramatically!
Within a few Seconds it appeared to prolong suddenly, like a melting rubber-hand it became longer and longer – and longer. The hand-root did as well as the fingers.
I needed to blink with my eyes more than once, because I could not believe it.
The sitters started to scream in amazement. The moving gesture of his hand did underline the strange look, that had changed the hands whole appearance! At least it had prolonged one third of its original size, meanwhile it was looking strangely malformed coming out of the Velcro-bind. 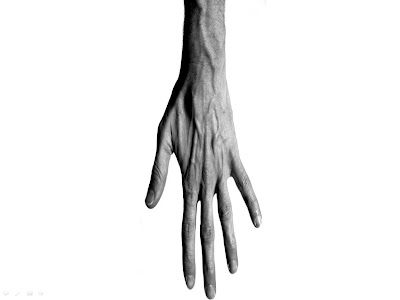 Picture: The Mediums Hand became bizarrely malformed during the elongating process, what caused a massive stir among the sitters, who reacted in a mixture of amazement and shock, so unawaited this rare mediumistic feature, known since the days of D.D.Home, was exercised…

And if that wasn t baffling enough, suddenly Bills lower arm started to prolong as well. The whole lower arm now became part of this strange wave-like movement and started to come more and more forward from out of the broad velcro-security-bind.
From my place his elbow, resting still at the end of the armrest, was clearly visible and did not leave its position, meanwhile the other end came more and more forward.

The look of it all was so strange, that it took some time until I realized what I was witnessing!
It was just in the morning, when I lectured about “The Physical Phenomena of Mysticism – From Elongation to Apparition”.
I introduced the issue “elongation” at length, because it is such an extraordinary and additionally rare feature, that is rarely known even though observed unquestionably with D.D.Home and Eusapia Paladino. 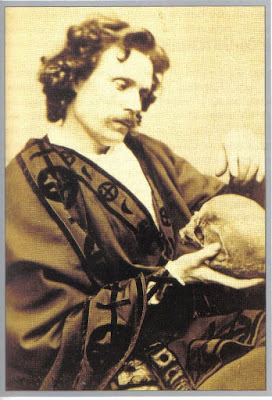 Picture: The strongest Spiritualistic Physical Medium of all times, like many do call him, Daniel Dunglas Home, elongated several times experimentally. He let himself measure before and afterwards and left his observers baffled more than once.

Home was measured after having his whole body size prolonged over 1 foot! In standing and in lying position this was validated by relieable observers (see Crookes, Adare a.m.m.). Paladino prolonged mysterious extra-limbs that were suddenly building at various parts of her body. These extra limbs were several times palpably touched and measured when they were coming forward from under her dress. For example the building of an “extra-arm” once was observed, right at her shoulder, performing different features with focus objects. Also a third leg did built that powerfully swung back into the cabinet behind her to transport furniture and music instruments onto the table in front of her and the sitters.
Moreover she did leave plaster casts of her limbs and face in a bucket more than 7,5 foot away from her! 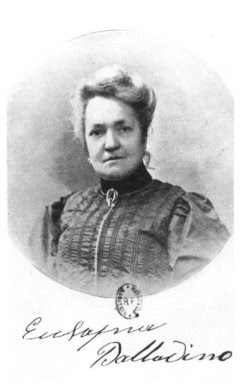 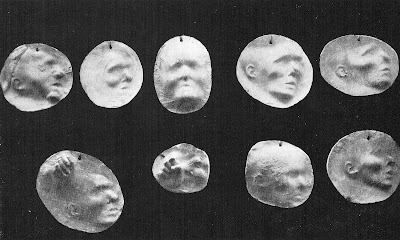 Picture: With Eusapia Paladino, one of the strongest mediums ever, extra-limbs were observed building from her shoulder and prolonging into the room. Sometimes she could “prolong” resp. project her facial features into the plaster in a bucket, 7,5 foot away from her

In the history of mysticism and the paranormal we find more reports that may have a connection – about indian fakirs and indigenious shapeshifting attempts, like in lycanthropy (to take the form and the abilities of animals) f.e.!

In the end it was a very rare mediumistic feature, so who would have guessed, that the Bill Meadows Spirit Team had performed it already frequently – but only in their closed home circle!
It must have been my educational attempt in the morning about these rare mysteries, that triggered the spirit team to perform it for the first time in (semi-)public! 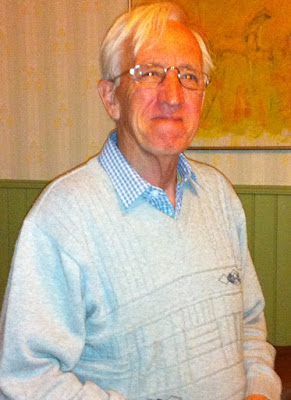 Picture: “Energy-based” Physical Mediumship at its best, offered by the Spirit Team of sympathetic Bill Meadows and his home circle

Then slowly the curtain lowered over Bills trunk, when I just thought I could catch a glimpse of the process returning the hand back into its original form, before the curtain closed completely in front of Bill!
The Sitters applauded spontanously, could not withhold their feelings in front of something with such an impact on our mentality and thinking!

Thank you to Colleen, Bill and Chris and Andreas & Jane Hindstroem and to our spirit helpers for a fulfilled weekend with many new insights about the here and now and the beyond!