we like to present new photos from spiritualisms heartland Brazil!
We want to exhibit them as a historical artefact of ectoplasmic experimentation over the centuries and all around the world!

The Phantom-Surgeon and other Ectoplasmic Experimentation

Today the physicist Dr. Urbano Pereira describes  in his book “Spiritual Surgeries – More Photos of Ectoplasm” most extraordinary ongoings. He presents a photograph for example, showing a materialized Spirit Control doing an “appendix-surgery” on one of his patients. Additionally he presents more photos of the typical ectoplasmic features we find with many Brazilain Mediums at that time.
The Physical Mediums of Brazil are strictly spiritualistic oriented, raised in the tradition of Kardec, even though experimental ectoplasmic features and partial materializations were frequently exercised.
Pereira experimented further with the medium Bello and we show here all the photographic outcome! 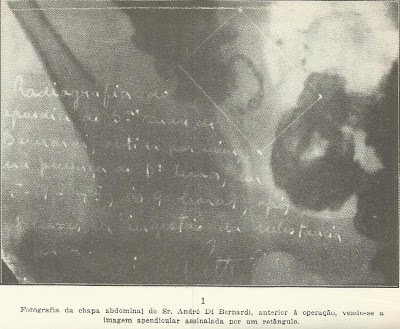 Picture: Photo of the xray-plate showing the abdominal region of Mr. Andrew Di Bernardi, prior to the operation, the appendix is marked by a rectangle. 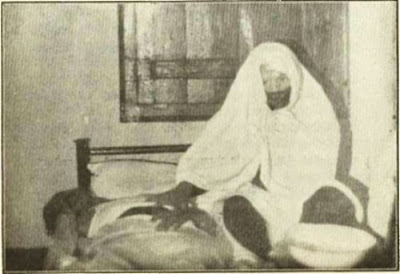 Picture: The Phantom is doing the operation in darkness. The patient is traditionally not anaesthesized resp. anaesthesized by “spiritual” injections which are a classical artifact in psychic surgery. 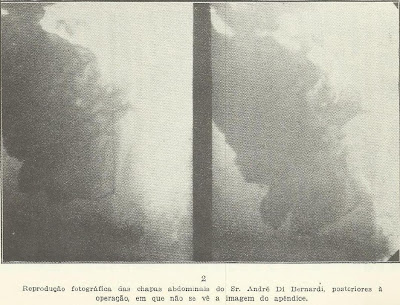 Picture: Photographic Reproduction of the abdominal x-ray plates of Mr. Andrew Di Bernardi, after the Surgery, exercised in Darkness by the materialized “Dr. Luiz Gomes de Amaral”. The appendix has gone!. 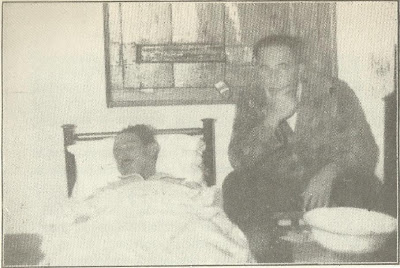 Picture 3: The Medium besides Pereiras patient after the Appendix Surgery! The Operation was succesful done by the Materialized Spirit Control. Dr. Pereira found that fact so intruiging that he named his book in regards to these ongoings.
The Experimental Seances
Several Seances were organized and documented 1946 by Dr. Pereira with the Medium Bello. We present here for the first time all the photos that were published in his book on the internet!

Picture(s): The Grammophon-discs that were melted during the Seance, shown in the next Picture. 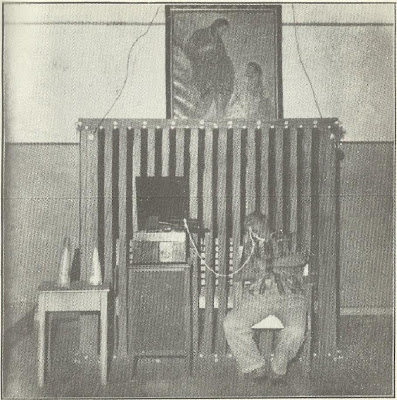 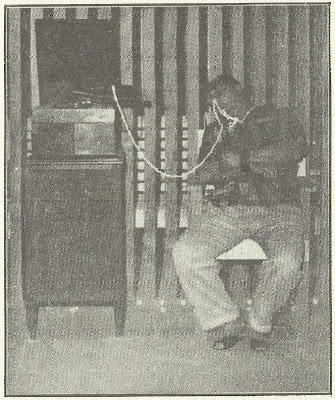 Picture: Photo showing the process of ‘enroling’ or melting the grammophon discs as displayed in the previous photos. A relaxed string of ectoplasm is connected with the discs. Another cord is flowing from the mediums nose over his shoulder. During all the Sessions the arms and legs of the medium were bound together strictly by iron ring-like handcuffs. 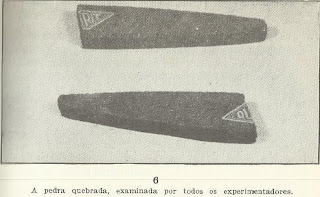 Picture: An object made of stone (unclear translation) was broken and re-installed during the Seance as well. The Author stresses, that no sign of the former broken state could be found, neither in the material itself, nor on the label…. 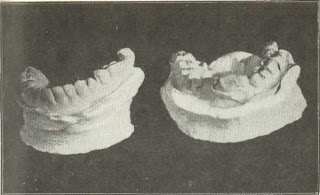 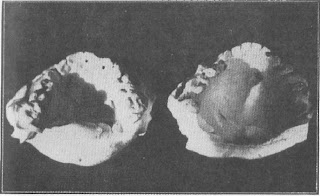 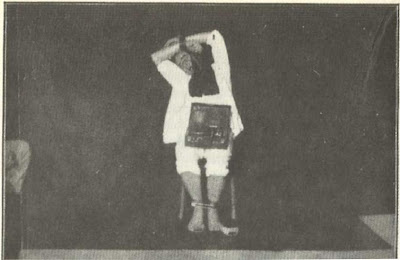 Picture: The dark cloth-like object on the mediums shoulder/chest may be a piece of black ectoplasm, that could be photographed only very rarely with mediums by now. Fact is, that such a sheet of cloth was neither prior, nor after the seance at the mediums body. The little record player on the knees of the medium was before the session closed and
positioned in another corner of the room. 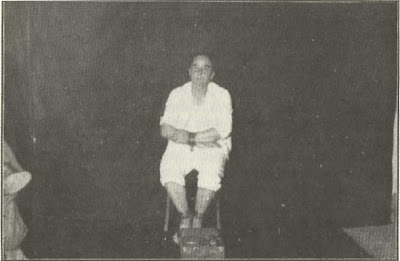 Picture: Photograph taken shortly after the closing of the session, when the lamps just had been switched on, showing the medium still in handcuffs. 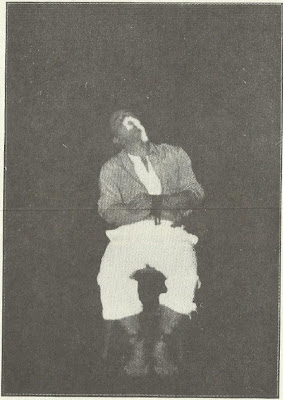 Picture: Formation of ectoplasm on the face of the medium. 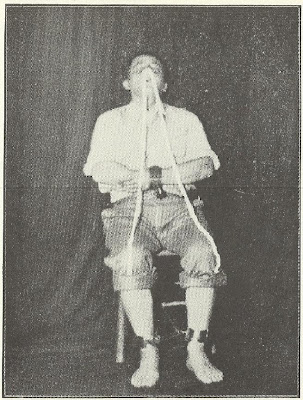 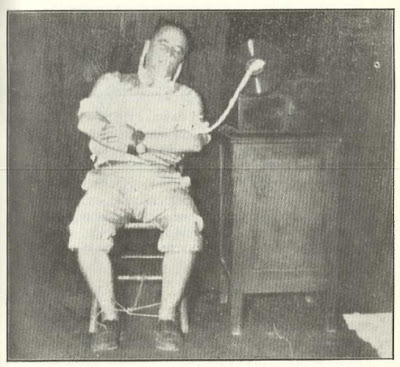 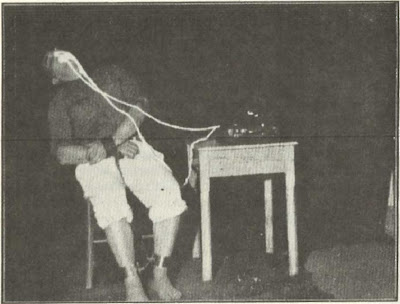 Picture: Ectoplasmic cords linking the medium with the grammophon. Again the strands seem to be relaxed. Only onder certain conditions the small ‘rods’ can be shown in rigid state, when photographed with flash-light, like in the last photo! 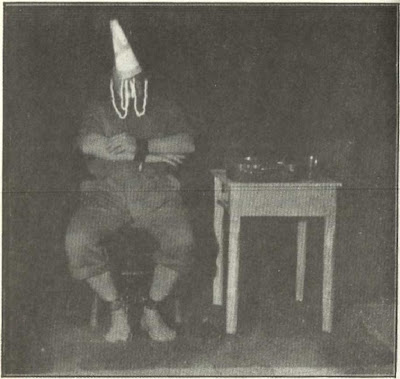 Picture: Shortly after the trumpet was moved above the mediums head, it was photographed, resting on mediums face. 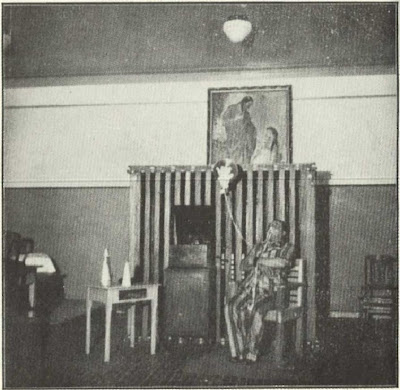 Picture: Finally a photo that shows an ectoplasmic rod in action, presenting a grammophon disc high above the mediums head, shortly before it was laid onto the grammophon.

Naturally these photos are attacked today by sceptics of all colour. Naturally they claim that the “phantom-surgeon” was the medium himself. How he managed to remove the infected appendix they don t claim to know though. As far as we know, Bello was never caught in a fraud.
We like to present them to you anyways, documenting the long history of ectoplasmic experimentation all around the world….!

MATERIALIZATIONS – The Testimony of a Police Detective

is the title of the small book the next photos were taken from. The medium is the famous ‘Peixotinho’. The emphasis clearly laid on ectoplasmic materialization with face embeddings showing more or less clearly the  relatives and friends of present Sitters.
The Sessions were held 1953/1954 in Pedro Leopoldo in the home and spiritual center “Luis Gonzaga” of Brazils most famous psychic Chico Xavier.
8 photos have been published from the seances, when many spirits could be identified by the sitters.
One photo cannot be reproduced because the relatives of the materialised spirit, a young boy of 16, who was identified by several persons present and showed himself clearly in the ectoplasm, are still alive and don t want to be reminded to the mourning time. All the other photos taken and published we reproduce here!
Additionally interesting is, that Chico Xavier himself wrote down a personal not to every single photo. 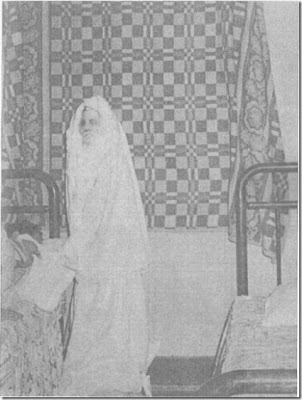 Picture: In April 1953 this photo was taken. The medium lies on the bed like always during his materializations and within the pile of ectoplasm a person called “Camerino”, obviously a well-known one to all present, materialized. 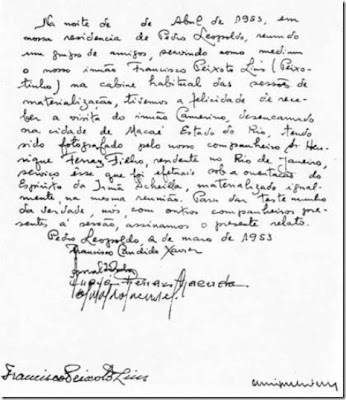 Picture: All upcoming photos are accompanied by a handwritten letter of Chico Xavier. The letters say more or less always the same. They simply confirm the witnessed materialization by all present, mention their names as well as gratifications to the spirit world. Sometimes a special Control Spirit is mentioned under whose control the materialization was exercised.

Picture: The Materialization of ‘Ana’, who lived and died away in Campos, in the State of Rio, photographed  in September 1953. Again a pile of ectoplasm contains the well visible facial feature. Present sitters identified the young woman beyond doubt. 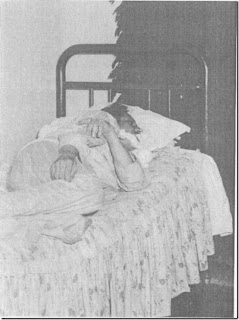 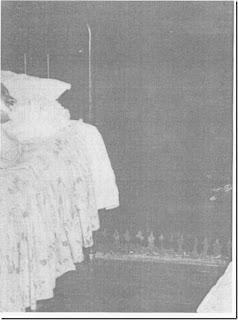 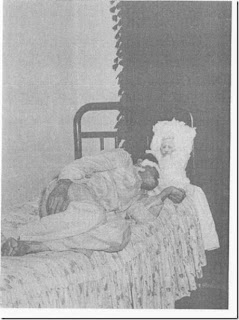 Pictures: The last three photos show the outflow of ectoplasm in steps. On the first photo only small quantities are visible, leaving the facial orifices of the medium. In the second photo the quantity has increased, meanwhile in the third one it is phenomenal, displaying again facial features, this time of ‘Pine’, a known person to the sitters. According to the photographer Henry Ferraz Filho, the photos were shot in 30 Seconds intervals. 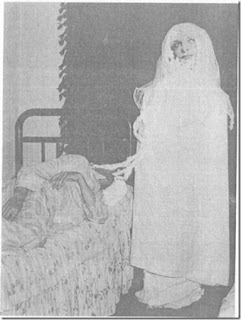 Picture: In the last Photograph a personal friend of Chico Xavier did materialize. Note the multiple strands of ectoplasm flowing from mediums mouth, nose and ears! The ectoplasmic pile seems to be built pretty complex again, embedding the strong facial features of Chicos female friend!
Naturally the photos are heavily criticized by sceptics of all colour today. But we should not forget how strange materialization phenomena can occur and Peixotinho was neither never caught in a fraudulent act after all. In the contrary! He is held in high esteem by all those who encountered their loved ones, looking in their faces, as if alive, being assured of their well being!
We will further on dig out portuguese publications and search for more rarely or never published ectoplasm photos for the internet. Until then we remain respectfully for all the light-workers of the past, that have built the road we Physical Mediums of the New Millenium are strolling on.
Love and Light
K.M.