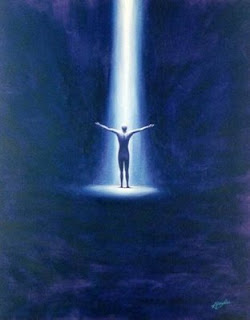 During a Physical Seance for Students of the First Spiritualistic Church of Sweden, the 4rth of May, when the FEG-Spirit Scientists announced the compaction of healing energy in form of a light that whizzed from Sitter to Sitter and through the Seance Room, an amazing Spontanous Healing Case occurred with a sitter!

The concerned Sitter itself waited 24 hours before revealing, what amazing intervention on the molecular plane must have taken place!
Not only the pain symptomatics had vanished and an ability to move the leg in a manner that wasn t possible for nearly 20 years was reinstalled, but also a huge lump, which was adhered to the sitters vertebrae and was visible and palpable at the spine region of her back had vanished spontanously when the sitter was checking her back region when after the healing phase it was allowed to open the hand chain.

Knowing about temporary reactions of the body, the sitter waited 24 hours before she informed the event organizer and confirmed the durability of her new state after the Seance event:

I forgot to tell you the most important and most odd from yesterdays seance.

Since my back surgery 20 years ago, I have had a lump connected to one of my vertebras.
It disappeared during the healing part of the physical séance!

When we let go of eachothers hands I touched my back and the lump was gone.
IT IS STILL GONE and I am now able to
lift and raise my left leg in ways I have not been able to for twenty years!!!

Would you please send Kai, Julia, Jane and the team all my love and thankfulness, I am deeply moved in spirit and mind. I am convinced the lump won’t come back.

Miracles are happening here and we are witnessing it, really cool Mr. Hindstrom.”

72  hours after the event we received a second confirmation, which seems to prove not only the outer symptom of the scarred lump, which had a considerable size, but in fact also the harshly affected mobility of the sitter was sustainably reinstalled through the healing energy of the FEG-Spirit-Scientists.

This is the ladies report from 72 hours after the seance:

(quote)
‘Dear Mrs. Muegge!
Oh I am so happy and thankfull, it’s so amazing.

There is no operation method for my chronic back injury, I had a
operation they thought would help me 19 years ago, but it was the wrong
method and I got permanent problems that caused a pain that nevers go
away, UNTIL NOW.

And I can move freely.

From the depths of my
heart, thank you for your dedicated work, your compassion and your
amazing spiritual power, you are such a beautiful couple and fantastic
team.

Hope to see you on your next visit in Sweden.
All my love and respect

So what exactly had happened in that ‘healing period’ during the seance?
The main spirit communicator alleged the spirit scientists would dense creational energy of the ectoplasm this time for a healing attempt.
The announcement of compacting the ‘ectoplasmic field energy’ has lead before to most different illumination effects within the seance room.

So with the medium hold by two persons – at hands and legs – a light suddenly appeared under the ceiling of the seance room: It then lowered itself and flew to several sitters, touched them, flew to the next, hovered and sped away until in the end three of those lights were visible and moved around.

When the lights started to disappear one by one and the hand chain was allowed to open, following a spontaneous impuls, the sitter checked its back-condition and was more than surprised the 19 years old existing outer condition had simply disappeared!

Too surprised she did not share this with the other sitters at that point, not knowing that also the pain and mobility situation was affected as well!

After 24 hours the lady felt assured enough to announce for the first time what had happened!

We want to send our thank yous to the spirit scientists of the FEG Spirit Team for again having triggered such a miracolous spiritual healing event!