We were 17 participants in a small room in the first floor at the location of the Basler Psi-Verein, Neuweiler Str. 15, Basel, Switzerland. Kai, the medium in cabinet, was only accompanied to Basel by one member of his home circle, Hermann (grey circles). All other participants were friends or family members of Lucius Werthmüller, the head of the Basler Psi-Verein. Two mediums from Australia were among them, David Thompson and Christine Morgan. I was sitting between Christine and Lucius in front of the door. Sabin, the wife of Lucius, was sitting next to the cabinet, opening and closing the curtain when necessary, and operating the red lamp. Lucius was operating a fan which was needed at times to cool the body of the medium. There were two windows in the wall behind the cabinet, but they were firmly shielded to prevent light from falling into the room. 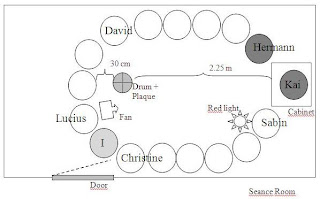 First, the room was searched for any suspicious objects by a sitter. The room was found completely empty except for the objects needed to perform the séance.
After we had sat down in the séance room, Kai entered the room. He and his clothes had been searched outside the room by a sitter, who followed Kai into the room. Kai walked directly into the cabinet and sat down on his chair. After an opening prayer, Kai induced the trance state by his rapid breathing technique while soft meditative music was playing. As soon as HB had assumed control of the medium, he greeted several guests, most notably David Thompson. During the séance that David had given on the previous evening, HB had spoken to Kai (and then materialized and touched him considerably – kisses, hugs; the Editor), mediated by David’s main trance control “William”. HB stressed it had been a pleasure, but also a great drain of energy. He said it had taken him a long time to gather enough energy to make the sitting of the present evening feasible.

I have seen / heard / felt the following phenomena.

1) Raps: Already during the advanced stages of the trance induction (!) fist raps were heard on the ceiling. As usual, the raps moved quickly around from one side to the room to the other. Some of them were quite loud, as if a fist would forcefully strike the ceiling. A few raps were also produced on the drum on the floor.

2) Lights: As soon as HB had taken over control, greenish lights with a diameter of about 1 cm appeared to fall gently down from the top of the cabinet into the room in a slightly bent curve. Their quality resembled the light produced by fireflies. These “raining” lights were a very beautiful sight. Usually, they just disappeared on the floor, but sometimes they would remain there for a couple of seconds, when the next light was already falling. Only one light at a time rained down, I suppose all in all about 15 lights fell down.
At a later stage of the sitting, first one, then two, then three lights were present simultaneously. They move around the room and sometimes touched sitters. At one time, two lights performed slow and small movements, somewhat in concordance, whereas the third light flew rapidly across the room, zig-zagging, touching the floor, rushing straight up to the ceiling, repeating this a couple of times, and the like. HB, who talked continuously, was very strict that four-limb control was performed, and that all sitters form a chain with their hands. Still, the lights moved around vividly. They frequently approached Christine’s and my feet on the floor. When they touched the floor or the ceiling, they only emitted a faint phosphorescent glow, as if covered by something. Towards the end of the light show, two lights faded, and one moved into the cabinet (curtains were open), and circled above the head of the medium for a while before disappearing as well.

3) Touches: Again, many sitters reported being touched by something. I was touched three times very slightly on my left foot, and one time very distinctly on my naked left knee. The touch felt as if a stiff cloth was moving on my skin. Christine has even reported that her chair was manipulated and touched from behind.

4) Plaque phenomena: To observe dark shapes above the luminous plaque, it was positioned onto the drum after being charged with light from a small torch. The usual shapes of hands were displayed, entering the plaque from its sides, not from the direction of the cabinet. Again, sitters were asked to join hands, and explicit four-limb control was demanded by HB.
A sort of new phenomenon for me was that a considerable mass of substance or ectoplasm was moving around the floor, until it reached the furthest end of the séance room at Lucius’ and my feet. I had the slight impression of something wide and white moving about the floor (in the very very faint light that the plaque emitted). This was accompanied by distinct sounds such as of a snake crawling on a stony ground.

5) Handkerchief flights: After that, experiments with the handkerchief were performed. HB instructed J to load the bits of phosphorescent stickers fastened on several areas of the handkerchief, including its corners, with the torch. Then, David, Christine and Lucius were told to hold the handkerchief on one of its corners towards the middle of the room. All three or four flights were comparably short, and HB had complained earlier that the Chemists are not well orientated in this new location.

6) Cool breezes: At several occasions, cool breezes were reported by the sitters. I have felt them as well, sometimes in my face, sometimes on my legs and feet. This time, it was not possible to remain uncertain whether they were objective or only a subjective impression. However, the breezes were weak and I still can’t decide if they had been of paranormal origin; perhaps they could have been produced by somebody’s breath.
Also, on a few occasions, most notably with the plaque phenomena, I felt a slight vibration on trembling within the floor. It was not caused by the fan motor that at times was turned on.
Finally, it was ectoplasm time. Until now, all phenomena had taken place in darkness.

7) Ectoplasm: In general, the ectoplasm development was shown in five different stages in good red light. The first four stages were shown two times, the last only one time. The curtains were always being held open by Hermann and Sabine who in addition operated the lamp. Turning on and off of the lamp was indicated by foot stamps of the medium or even by verbal command of HB, who talked normally as soon as the ectoplasm had disconnected from the medium’s mouth. There seemed to be less gargling and groaning sounds this time during the ectoplasm production.
(i) When the red light was turned on for the first time, all sitters could plainly see a whitish cloth-like mass protruding from the medium’s mouth. He bent to the front and seemed to facilitate the ectoplasm’s outflow of the mouth by accompanying movements of both hands. During the first display, the ectoplasm was comparably short, perhaps, 30-40 cm; during the second display shortly after it had already reached the floor.
(ii) The next two displays in red light simply showed the ectoplasmatic veil lying curled on the floor between and in front of the medium’s feet. There was no connection to the medium’s body, and HB was talking normally through the medium again.
(iii) The next two displays showed the supposed hand of HB, who announced that he would sort of dip his own hand into the mass and aggregate the ectoplasmic hand accordingly, then waving to the sitters with it. The purpose of this was to show the autonomous quality of the mass, and its ability to move. Indeed, a hand-like shape had risen about 30 cm upward, continued to rise some other 10 cm, and performed jerky waving movements. During the second display, the hand was a little higher. This ectoplasm was of condensed matter, not the veil-like stuff from before. It looked more like solid cloth.
(iv) The next two displays showed how a different column of ectoplasm moved upward on the mediums body, from the belly region towards the right chest. It was again of the veil-like quality. During the second display, the column moved from the chest region to the left shoulder region. It seemed to grow and move on its own behalf. Like during the previous displays (ii-iii), the medium’s body was perfectly still, his arms hanging straight down at the sides.
(v) Now, HB announced that the medium would wrap the ectoplasmatic veil around his entire body (with his hands) to supply the body with energy. Indeed, when the lamp was switched on again, the medium was covered all over by an extremely fine and very thin white veil (the “cocoon” condition). It was planned that the medium would next show the highest condensed form of ectoplasm, a luminous whitish-reddish mass that would also fly around in the room. However, the chemists informed HB that the energy was already too low, and that the sitting needs to be terminated. HB said goodbye to all, a few moments later the sitting was finished.

All in all, it was a very impressive séance – especially given the unusual situation for Kai. He was only accompanied by one of his circle members into a room previously unknown to him. Yet, the sitting was highly successful, and most phenomena reported from the home circle in Hanau were repeated in identical ways.

Once more, I am deeply indebted to Kai for another memorable evening. Moreover, I thank the members and friends of the Basler Psi-Verein for their friendly invitation and their efforts to make this sitting possible – to make it possible to “witness the impossible” in Basel.