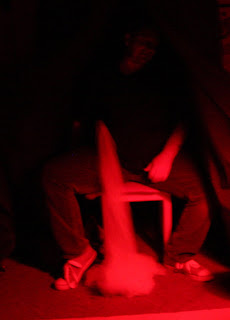 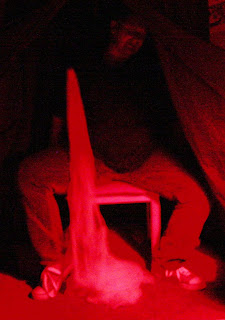 Pictures: Free Standing Ectoplasmic Column building up, photo’ed a few minutes bevor the faces were showing in the Substance – and with 4 seconds of time in between.

The FEG Cabinet Sittings in the Home Circle always set something on top of its nearly unbelievable regular Phenomenology. Mostly these additional contents come in form of materialized Messages with high coincidental impact for present Sitters. May they be Messages from deceased Friends, relatives, oftentimes with their original handwriting or other additional informations no one was aware of – or Trance Speeches of Spirit Personalities with baffling content, like in this instance!

This time one of the highest organized Spirit Entities of the FEG’s Spirit Team – the Gate Keeper “Ptah” – was reciting an old ZULU Legend about Aliens implementing “the male system of Kingship” into men’s social system. This System shall be allegedly bound “to a certain Bloodline”, “the heritage of an old Alien Race”, coming from the Star System “Chi T’Auri”.

It is not the first time Ptah is referring to alleged ongoings milleniums ago.
He originally claimed being part of an Alien Race, that once stored “a main creation secret” – through interbreeding (psychologically or physically) between humans and Aliens – within the human existence/Body/Mind and how this knowledge was partly revealed in the Secret Knowledge of the Eastern Hemisphere and over the centuries been brought to Europe – mainly through the Knights of the Temple.

This time he recited a story that was once partly told years ago by the ZULU shaman Credo Mutwa also – even though Ptahs Version had another emphasis – the relationship between Man and Woman. Revealing this he confronted the Sitters with a kind of creation myth of high strangeness. He mentioned for example an androgynous Mankind, different Alien Races fighting for the control over the development of the human soul, strange procedures making the androgynous to men and women and the following misuse of mankind, introducing them into the system of Power and Control.
For the Guest Sitters, this Speech of “Ptah” again had a strong impact out of different personal reasons. Moreover the story coincided exactly with ongoings, their thoughts and reflections of the former days.

Additional to these peculiar contents of Trance Speaking “The Chemists”, especially booked for the Production of Physical Manifestations, did produce – besides many known features – again ectoplasm with highly interesting Characteristics.

The Main Control “Hans Bender”, a deceased Prof. for Borderline Aspects of psychology (Parapsychology) at the University of Freiburg, explains permanently during the last phase of the Seance, when the ectoplasm was exhibited in Red Light in and in front of the Cabinet, the different states of the process.
For example he does claim, that ectoplasm always arrives in a certain aggregate State, that in the following is changed into others.
He claims, that the dark and humid human mouth is the area where they can bring in large quantities of a thin and spiderweblike fabric, that in the following can be used by them for different actions, like for example the ectoplasmic appearance of “Hans Benders” hand, that is regularly waving to the sitters.
Furthermore is the veil-like substance able to climb freely onto the mediums body to build something like a cocoon around him. Even so can the aggregate state of the “veil” be compacted to build up columns of ectoplasm (see photos above), that are standing freely in front of the medium to form out later bodily features of Full Materializations. 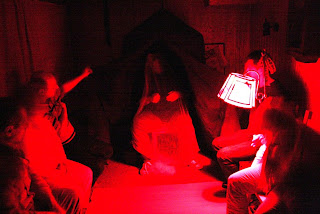 Picture: The Column grew up to the point it did wrap the medium completely like in a cocoon.

Additionally a certain state of the ectoplasm can be used to exhibit other human features like faces. By now only witnessed and not photographed, a thick mass of white was showing weeks ago first the profile a female Indian Face, obviously larger than normal, and shortly after a smaller face, both in midst of the mass. 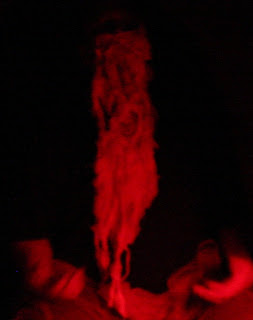 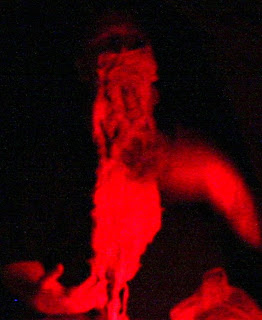 Pictures: After the Spirit Control claimed to have “played” with the plasm, an obviously thicker mass protrudes from the mediums mouth…

Now in the session we do refer to another presentation of faces has happened, probably three of them have been visible. One of them was spontaneously recognized by a female sitter who is definitely sure to have identified her Grandmother.
Even though through the long exhibition time of the photos (1.5 – 2 seconds) the features blur with every slightest movement of the medium – some features are clearly obvious and presentable! 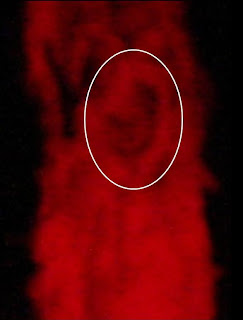 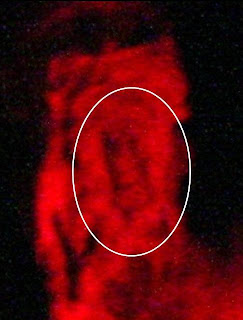 Pictures: Only two of the three observed faces could be localized on the Red Light Photos – the first was allegedly clearly identified by a sitter, who claims it is definitely her Grandmother…

After the mass with the faces welled out of the mediums mouth it dissolved from it and “fell” (?) onto the mediums breast, where it again was observable for many seconds.

The changing in appearance, respectively the compaction of the matter called ectoplasm seems to be crucial for the different appearances of the Substance.

In the last weeks the chemists multiply claimed to try to compact the ectoplasmic matter so dense, that another unique aggregate state could be achieved.
In this state the plasm is turned into a glowing mass, claimed vital energy.