Witness Report Public Mediumship Demonstration: Report of the events of the physical seánce at “Jenseitswelten” in Koblenz the 21th of January, 2011

Home » Witness Report Public Mediumship Demonstration: Report of the events of the physical seánce at “Jenseitswelten” in Koblenz the 21th of January, 2011

This was my first time attending a physical séance. I had read about them and felt that it was a rare chance to take part in a world known circle.

There were 16 participants including Kai, the medium, Jochen and Hermann and the circle leaders as well as several sitters who had taken part in Kai’s seánce in the past. It was my first time.

The venue was a living/dining room separated in the middle by a black curtain. We all took our seats the living room and received instructions from Kai. He explained some of the history of physical mediumship, how we should act during the seánce and what his role is. He explained that he uses holotropic breathing to go into trance and that we shouldn’t worry about him if the sounds he makes lead us to think he is in distress. This is normal.

We were all given the opportunity to check the seánce room and cabinet. Everything looked in order and we were then asked to take our seats. Most of us were sitting with our backs against the wall. Kai said a prayer and then sat down in the cabinet. The lights were turned off and it was pitch black in the room as Kai began to breathe himself into trance during which time meditative music was played.

Hermann put on new music, German “new wave”, and asked us to sing along. We soon heard the beginnings of a voice which belonged to the trance personality, Hans Bender (HB). After speaking a few sentences, HB’s voice could clearly be understood. He sounded like an older man who spoke in a sophisticated and somewhat old fashioned manner. This is a contrast to the intonation and the vocabulary used by Kai. HB welcomed us all to the seánce.

The room got progressively colder. The first raps could be heard. It was as if someone was tapping on the floor with their fingernail. It sounded as if the sound was right in front of me. Everyone cheered and the raps increased in frequency and intensity. I could hear them in the bookshelf behind me as well. HB asked us to listen for raps on the ceiling. We could hear softer tapping which HB said was electrical discharges. We could also hear sweeping sounds and something that sounded like wet wall paper being pulled from the walls. 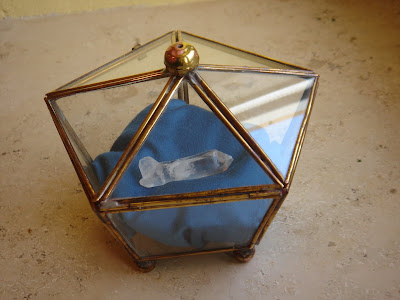 The sitters sang and formed a chain by holding hands. This was partly to build the energy and partly to keep the sitters’ hands out of the energy field in the middle of the circle. In the last séance, the medium was slightly injured because one of the sitters had put their arm into the energy field. I could see a ray of light falling downward to the floor and landing as a diffuse glow. The glow then formed into a small ball of light about 1-1.5 cm in diameter which began to move quickly around the room. Another light joined the first one and they jumped and danced about. A third mini-light joined in for a few moments. We sitters sang and cheered and the lights reacted by moving even quicker. One even pounded the bongo drum in the middle of the circle. As strange as it sounds, it was a real party atmosphere! Hermann asked if the light wanted to touch someone and it promptly tapped a sitter (a good friend of mine) on his thumb. The light then hopped onto the foot of the same sitter and jumped up and down.

The smell in the room had been changing since the start of the seánce and became increasingly clammy and dank. HB announced that spirit hands were present and soon sitters from every direction were squeaking and yelling, “I’ve just been touched!“. I personally wasn’t sure if I was touched or if it was my own imagination.

HB then called for an 8 minute airing out of the room. He said that several sitters were suffering under oxygen deficiency. During the 8 minute pause the medium was sealed in his dark cabinet, we stayed seated and the windows and doors were opened.

HB asked that the florescent plaque be placed on the bongo drum so that we would be able to see dark shapes above the plaque. I was sitting about 50 or 60 cm from the plaque. The temperature dropped and a hand could be seen moving from where we were sitting to the plaque. The plaque was touched and turned! The plaque had to be put back in its original place. Every time a hand came from our direction (3 o’clock in the circle with the medium at 12 o’clock) there was a decrease in temperature. The hands came from our side about 8 or 9 times and from the 6 o’clock position about 5 or 6 times. When the hands came from the 6 o’clock position I didn’t feel a change in temperature.

After each display of phenomena HB asked if we all saw it.

ABBA music was now playing. HB asked for a trumpet to be placed on the floor close to the cabinet. The trumpet had florescent tape around the large end. We were still building a chain and singing as the trumpet began to crawl forward and then slowly began to climb upwards and then fly about the room. After jumping and circling, the trumpet plopped on the floor. We were asked to count backwards from 3 to 0 and then press our hands together. The trumpet flew up into the air again. I enjoyed the trumpet moving in rhythm with ABBA’s Dancing Queen. The trumpet also went from sitter to sitter in a type of greeting in that it just shivered in front of each of us. HB suggested that the music wasn’t that good and that he prefers “Bavarian Folk Music” but he doesn’t believe that the young people here would like it. (Thank you, Hans, for seeing us as young!) It might be an interesting experiment to play some of HB’s favorite music …. just to please him!

We were then able to witness ectoplasm in red light. The medium gave the signal to open the cabinet curtains by stamping his foot 3 times and to close the circle after the same signal. Jochen took pictures of the examples of ectoplasm with his camera (without flash).
HB often said “poor medium” when the pictures were being taken. The circle leaders said that the medium wants to see the pictures. This is understandable as he is in a type of sleep state and can’t experience what is going on. My question is: what concerns HB that the medium is being photographed? Is it harmful even though no flash is being used?

The first example we saw was the medium standing and pulling an ectoplasm veil from his mouth.

In the second example we saw a pile of ectoplasm on the floor next to the medium’s left foot rising up like a column.

HB then said that he would use his own hand in a show of greeting. We could see a thin rod like arm extending from the medium’s mouth with a hand attached to it. The hand lifted a little in an effort to wave.

The forth example was like a pile of ectoplasm on the medium’s lap with a hand extending out of it. 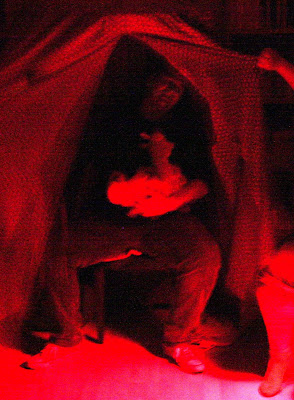 HB said that they have something special for one of tonight’s sitters who is planning on starting their own circle. The curtain was opened and we saw the medium bent over coughing and choking and then he spit out an apport. This turned out to be a 3 cm x 1 cm sized quartz crystal that has energetically been charged to help with development of the new group. This crystal should be kept in the seánce room.*

The seánce came to a close. The medium struggled to get out of the trance state. The circle leaders said that he usually comes out easily. They suggested that HB hadn’t brought him out properly. It took about 30 minutes for Kai to recover.

*The quartz crystal was now a topic. Three people said that they were planning on starting a group. My partner has been planning this for almost a year. He has been reading up on it, getting equipment, finding sitters and so on. Two ladies said that they talked about starting a circle a few days ago. The third person backed out as they realized other people were putting claims on it. We waited for Kai to come in after the trance to say who gets it. He was surprised that HB didn’t say exactly who it was for. It was his feeling that is was for my partner. Kai was very diplomatic in dealing with the disappointed ladies.

Now we have the crystal in the room that will someday soon be used for physical seánces. All in all it was a good experience. It wasn’t scary. It seemed somehow normal. It can be compared to a fun party in the dark!