Dr.med.Schwab, who already achieved highly interesting Teleplasma photographs with the Berlin Medium Vollhardt (Pictures presented in a former article) persuaded 1925 Stanislawa P. to try to achieve new Filmrecordings of her extruding ectoplasm (then teleplasm). The filming could actually been done: The cabinet curtains were being held open and for 30 seconds blinding white light of the Magnesium flash flooded upon the stream of ectoplasm, leaving Stanislavas mouth. After the 30 seconds Stanislava suffered a colic attack from her renal calculi (x-ray-proved). Besides an unusual menses was been stated.
The next day though everything was fine again! The Sittings progressed, but the controls of Stanislava strongly forbid any further experimenting with Magnesium Flash, resp. the filmograph.
Nevertheless at the end of the row of experimental sittings the controls once again allowed the process and so 22 mtrs. or 120 seconds of Film again were exposed to the medium in blinding white Magnesium-light. During the process 6 persons observed the teleplasma in whitest light. They described that the substance was developing, wormlike extruding in all directions, sometimes revolving itself again, with lifelike movements, that filled areas with mass where seconds before holes were seen in the substance. At other areas the substance seemed very thin where suddenly breakthroughs of underlying shifts of the substance were observed to occur, protruding into an unknown formgiving matrix.
Again the medium suffered directly afterwards the same conditions like after the first filming experiment.
Schwab reports that it happened that a full flow of ectoplasm flooded directly into his hand that was positioned by the medium under its mouth. Schwab tells he closed his hand completely around it (see last photo) and was immediately recognizing that he wasn’t able to sense anything in his hand. Two seconds later his opening hand revealed, that the substance had changed its density and seemed to been gone. 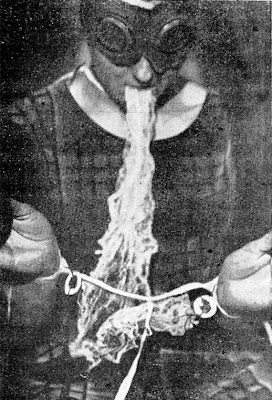 Stanislava tied up and bound with her sunlamp-glasses extruding that peculiar substance that can be clearly differentiated from all sorts of drapery. In some areas it seems transparent, while in others it presents its knotty structure. 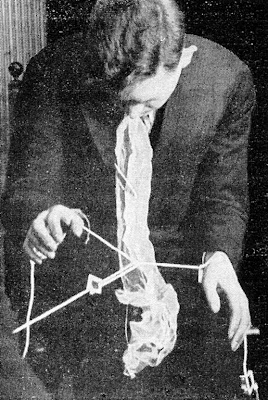 Therefore an artist was especially asked to produce fraudulent ectoplasm. Not until he was allowed to free a hand the artist was able to start the fraudulent exposure. Schwab especially refers to the visual differences the photos present. While the artists drapery only hangs down the mouth Stanislavas ectoplasm shows tendencies to broaden and is actually erecting itself round the navel-area against the camera lens. 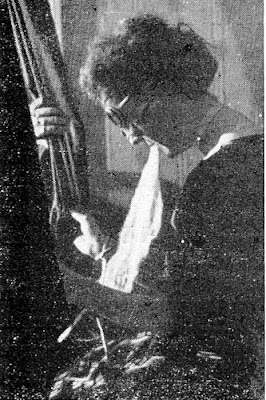 Seen from the side Schwab again wants the reader to become aware of the differences between Stanislavas genuine product…. 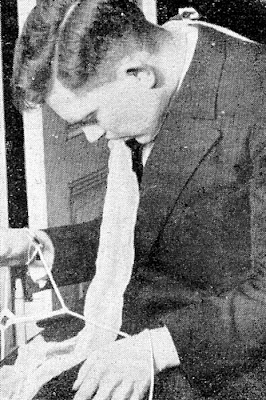 …and the drapery, that was exposed by the artist! 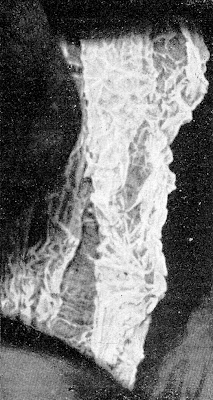 This piece of teleplasm that was extruded by Vollhardt-Rutloff Schwab compares…. 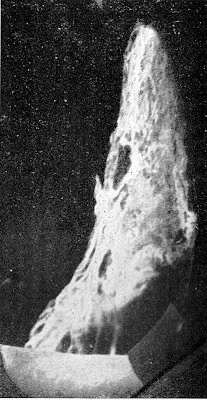 …with this piece by Stanislava and mentions the distinct conformity in its irregularity, its perforation and disruption, its sudden purposefulnes of the mass to irregularly positioned areas and its accumulation to achieve especial forms like in the following two pictures. 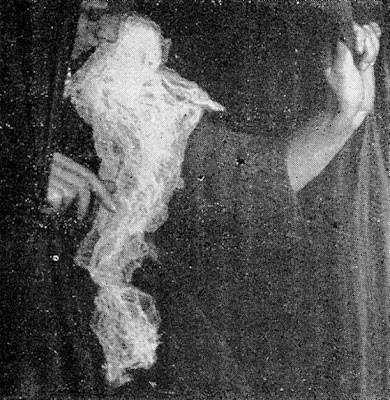 This is the first of two photographed stages of a building miature-phantom, when the substance gravitates to a headlike part, where it becomes thicker and thicker. 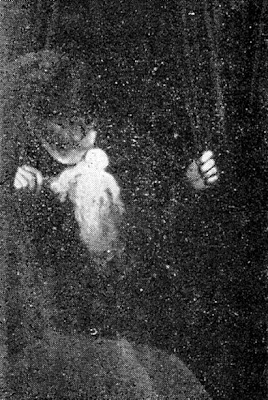 The second stage was photographed from a larger distance and shows the rounding of a head and the contours of arms. The curtain wasn’t closed between the two stages and the 6 acdemics present observed again the complete evoluting of the mass. 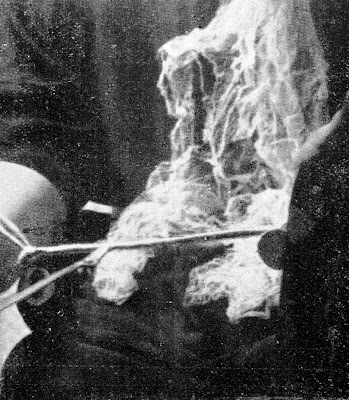 Again the teleplasm is arching forward. 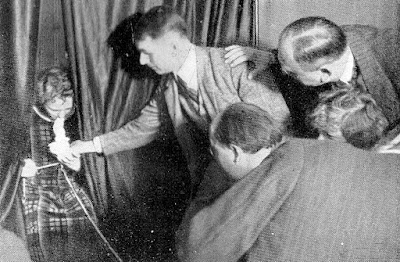 Dr.Med.Schwab closes his hand around the teleplasm. But the teleplasm changed its density and vanishes unobserved.

At the time the Felix Circle searches for the films, that Schwab and Schrenck had produced with Stanislawa. Probably they are stored in Freiburg at the Institut of Psychology. As soon as we find out something about them, we will let you know!(end)

And here is the rest of it.