Originally the first time published were Randones psychic feats after photographic experimentations with the photographer Benedetto in Carreras “Luc e Ombra”. When the first image of the materialized spirit form was achieved, we present here, it was the 18th of March 1901. The announced phenomena were prepared by a spirit team and with a friend of the Family, a Miss Maaza, the experiment began early in the morning.
In the corner of a room two chairs were prepared, one for the medium, one for an announced spirit entity, no one knew if it would be able to achieve to materialize. In the opposite corner, the photographer, the mediums brother Filipo, and the familiy’s friend were waiting for the trance.
Still standing in front of this seating arrangement, the medium fell in trance and Filipo had to position his sister into focus. Then he reports: “Suddenly something appeared around my sister, what looked like cotton-wool. This substance grew into something like a cloud, now floating mainly upon the stool prepared for the spirit, that wanted to show up.”
After the foglike substance retreated from its wrapping around the chair, before the eyes of the two witnesses, directly near the medium in a half lying position a second person with black eyes had appeared.
Miss Randone moaned heavily in that second and Miss Maaza overhanded to Filippo the photographic apparatus and he exposed the strange image for 30 seconds to the photographic plate. 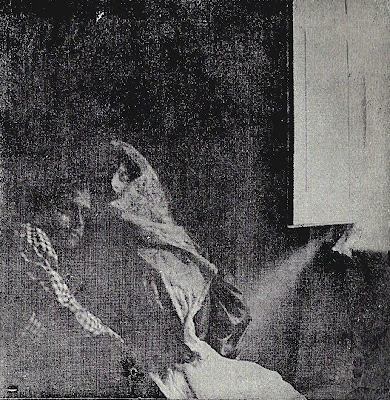 Pic: The Phantom appears for the first time and could be identified weeks later by her own mother. Isabella, called Bebella, was the daughter of a local souvereign and died early in the age of 16

All in all after 11 minutes the phantom was gone. It vanished in short stages from the moment of the image-taking on. 3 seconds after the end of the plate-exposure to the light the form was completely dematerialized.
The weeks after this incident, many were shown the photo, but none was able to identify the spirit entity.
So during following seances, the spirit came through and announced she was a beautiful bride, that had died in 1889. She revealed specific details about her identity while she was speaking through the entranced medium.
“Bebella”, how the sitters named her first, gave further information, that made it possible to identify her as the 16 year old daughter of a local souvereign, died of nephritis and scarlet fever so early.
Her original name was “Isabella” and her mother identified her without a doubt on the presented photo. 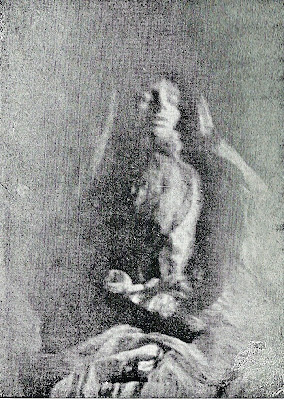 Pic: “Bebella” materialized the second time the 27th of June1901 and was from then on Randones main spirit control

3 months later, the 27th of June 1901, Miss Randone again fell into a deep trance. Immediately the same cloudlike substance appeared around her and again the phantom appeared out of it, this time draped in white and materialized from head to toe. Again they were able to take a photo, but because this time the light wasn’t good it came out very dark.
From then on “Bebella” became one of Randones main controls and further on materialized regularly during her sittings. Moreover reported is, that Bebella produced flower apports mostly by day in front of many witnesses.
Miss Randone held successful seances until 1906.
(From Lombrosos Hypnotic and Spiritistic studies)(end)