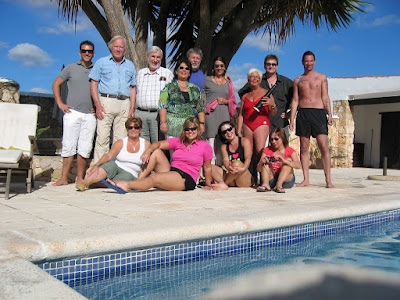 Firstly, since I am writing this blog on October 31st, I would like to wish all our members a Happy Halloween!!

Kai Muegge, who I regard as a spiritual brother, has kindly added a great picture of our group in the relaxing sushine of the Mediterranean island of Ibiza, whre 13 of us gathered at the invitation of Dr. Hans Schaer to join him at his holiday Finca there – the lovely ‘Hacienda de Bougainvillas’ – from October 21st to October 28th.

As well as lots of sun, sea and relaxation, our intention was to conduct a series of experimental sittings in a specially blacked-out room close to Hans’ swimming pool. Most of us who attended already knew one another as friends before this gathering and – from the beginning of the visit – we were a really happy lot, enjoying one another’s company and looking forward to the experimental sessions together.

This was the first time that the six members of the FEG who were present had attempted such a series of sittings away from their normal cellar venue in Hanau, Germany. It should also be mentioned that although most of us had had the opportunity already to sit with the group in Hanau, we had not all sat there together on one single occasion, so the personal energies of the different sitters for these experiments were mixed, and needed to be blended together by the FEG’s spirit team to achieve the best harmony between sitters and consequently the best possible results.

The sessions were of two different types; firstly the ‘Table Sittings’, which were of the type originally conducted by the Felix Group, where no cabinet is used, and no direct trance communication takes place during the sessions. The group’s medum – Kai Muegge – simply sits around the table together with the other participants, and is completely conscious during the whole of the session. I believe (and it is only a belief – not a fact) that the spirit team of the FEG conduct these ‘table sittings’ in an energy-based way, similar to the method used by the spirit team of the Scole Group in the 1990’s. There were four ‘Table Sittings’ whilst we were on the island, and just one of the other type – the ‘Cabinet Sittings’, which are ectoplasm-based, with the medium in deep trance.

Not everybody arrived on the island on the same day, so we had less sitters for the first and second ‘Table Sittings’, which took place on Friday, October 22nd and Saturday October 23rd.

All 9 of us were present at this first session (4 visitors did not arrive until Sunday). The round table that was used was very heavy – approximately 30kg in weight and some 6 feet across. The circle was opened by me in prayer and meditational style music was played for about ten minutes. After this, sitters placed their hands lightly on the top of the table. Then the music was changed to lively music, including some Beatles songs and some CD’s of ‘Spirituals’ played by a Dixieland band that included our host Hans Schaer on trumpet.

It was not long before the heavy table started to move slightly across the floor. The movements were gentle at first, but soon built up in strength. The table began to tilt right over in one direction after another, before resorting to ‘hopping’ on one leg. Whilst we had all hoped for strong phenomena, we were delighted when the table finally achieved a full levitation of about 6 to 9 inches off the ceramic tiled floor for a short period!

At this first sitting, there were no musical instruments present in the room. However, we witnessed repeated ‘rapping’ on the walls and table, and both Sandra and Kai (on totally opposite sides of the table) were touched on or around the knee area by what felt like a spirit finger.

Throughout the session, all sitters felt a distinct coldness in the room from their knees down to floor level (which is a typical sign of spirit activity in any physical circle). The table continued to move about bodily with obvious strength for the rest of the 2-hour session.

This first session had proved to be a great success!

The table sittings during our visit were not compulsory, and two people stayed out of this second sitting so they could prepare food for the group. That left us with just 7 sitters. Hans introduced a drum and drumsticks into the room, and this was placed well away from the sitters, in the corner. He also laid a musical trumpet across the table (with its mouthpiece removed and placed seperately on a small side table that also contained the recording equipment and music cassette player.

The sitting was once again opened in prayer, and the phenomena was strong from the outset. Similar music was played, together with some rousing singing by the participants. The table phenomena commenced with concise movements so strong that is was on occasions difficult to keep our hands on it, whilst the table demonstrated a life of its own. The tilting and levitations were frequent, definite, and much higher than on the first night. It was repeated several times.

This time the drum was beaten several times, and there was regular rapping on the table, walls and cupboards. There were lots of touches by spirit and almost all the sitters experenced this on different parts of their anatomy, heads, shoulders, arms and legs.

Clearly the strength of the available energy had built up considerbly since the previous day!

Four of Hans’s guests from Switzerland did not arrive until Sunday, so we had a rest day then. The third table sitting included these 4 guests, but three others sat out, so there were 10 of us present this time. Hans placed his musical trumpet on the table again, and the drum st in the corner with its 2 drumsticks.

The energies continued to build during this third table session. The table itself levitated to about 2 feet off the floor this time, and moved around horizontally over the floor in a lively fashion throughout the session. Once again, the drum in the corner was played, but without the drumsticks appearing to move at all. There were constant raps on the walls and table; often coming from under the table, and responding occasionally by supplying the correct number of raps that had been asked for.

Sitters were again frequently touched by spirit hands. Towards the end of the session, there was a definite ‘blowing’ sound in the air, as though spirit were trying to blow Hans’ trumpet, or at least replicate the sound of a trumpet being blown. Although they clearly tried hard to achieve this result, they were not quite able manage it this time, but it was obvious that the intent by spirit to achieve such a result was there.

We all enjoyed these ‘Table Sittings’ very much. They had been extremely successful in a very short space of time, and I wouls like to thank the members of the Felix Group very much for their help and dedication in bringing this exciting phenomena within the reach of other visitors such as ourselves.