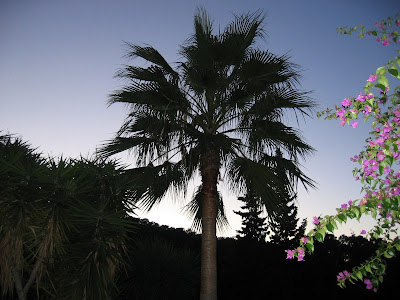 Picture: The “Hacienda” in the evening – shortly before cabinet sitting photographed

As I mentioned in my last blog, a group of 13 of us undertook a series of sittings for physical phenomena during our week’s stay at the beautiful Finca of our friend Hans Schaer in Ibiza.

This specially arranged ectoplasm-based ‘Cabinet Sitting’ (Medium Kai Muegge) took place on the evening of Tuesday, October 26th 2010, and proved to be the ‘Jewel in the Crown’ of all the other experimental sittings that week.

It was the only ‘Cabinet Sitting’ of our stay, as the Felix Experimental Group’s physical medium – Kai Muegge – is restricted by the group’s spirit team to undertake no more than one ‘Cabinet Sitting’ per week, during the few months that have currently been allowed by the spirit team for a series of demonstrations to the public of his physical mediumship. Several members of this site have already been privileged to witness such a sitting of the FEG at Hanau in Germany; the group’s base.

When public demonstrations are not taking place, the FEG’s ‘Cabinet sittings’ normally only take place once per month, with ‘Table Sittings’ in the weeks between these ‘Cabinet Sitings’.

The room was set out differently this time. There was no central table. A simple ‘Cabinet’ had been formed by placing two curtains across one corner of the room. Kai sat behind those closed curtains on a simple wooden chair with a raffia-style seat. The rest of us, sitting on almost identical chairs sat in Horseshoe formation from the cabinet around the room. For this sitting, Lucius was the circle leader. Prior to the sitting – by holding them up to a bright electric light – he had ‘activated’ the luminous tabs on a large handkerchief (such as was used during sittings of physical medium Rudi Schneider many years ago); the luminous band around the wider end of the seance trumpet and the oblong-shaped luminous plaque (which I judged to measure some 6 inches long by 4 inches across).

These were then temporarily placed in a drawer behind Lucius, which was at the other end of the room from the cabinet (approximately 13 feet away). A small empty ceramic urn (about 1 foot high) was placed 11 feet directly in front of the cabinet (and a few inches in front of me).When the main spirit team communicator ‘Dr Hans Bender’ requested it, speaking through Kai – who would be in deep trance – the plaque would be placed on top of this ceramic urn; to be used for their experiments, and the handkerchief and trumpet would be placed wherever the spirit team wanted at the appropriate times.

The circle was opened in the usual way after the red light had been turned off. Meditational music was played initially, and the sitters conversed quietly whilst the medium noisily induced his trance through a system of holotropic breathing. This process took about 10 minutes to complete and finally, Kai was in a deep trance. Occasional instructions were given by spirit team leader Hans Bender.

The first phenomena took place just 15 minutes or so into the sitting. First 1, then 2 spirit lights appeared high up in the room – constantly moving about. To begin with these were close to the cabinet, and kept fading out, but they soon gathered strength. These spirit lights became very bright, and I would estimate their size as somewhere between the size of a 1 euro and 2 euro coin. Although I could see these spirit lights most of the time as they readily demonstrated their aerobatic ability; not all the sitters could; but all saw them frequently and intermittently. I came to the conclusion therefore, that these spirit lights were somewhat similar to one type we experienced at Scole, that were known to us as ‘hooded’ lights, because they appeared to be unidirectional rather than omnidirectional.

The lights travelled rapidly all over the room and frequently halted just a couple of inches in front of our faces. In my case, that was almost 12 feet away from the cabinet. Next, Hans Bender asked for the handkerchief to be made available and held out in front of a sitter. Lucius (who was sitting next to me) complied, and held out the handkerchief – allowing it to fully hang down between his hands. The luminous tabs on the handkerchief illuminated it well, so we could all clearly see what was going on. Soon, the handkerchief was taken from him by spirit, and paraded around the group. This execise was repeated several times, with other sitters holding the handkerchief.

At this point, virtually all the sitters (me included) were touched by different spirit formations. Hans Bender informed us that these were all formed from living organisms. Some felt as though they had been touched by ‘feather-like’ formations. Others (myself included) were gently touched on our hands, legs and faces by what felt like sizeable bunches of leaves. Some felt a finger-like touch on their knees, hands and faces.

The seance trumpet was produced on request, and placed on the floor in front of Lucius. Shortly afterwards, it levitated – to the shouted enthusiasm of the sitters – and moved rapidly around the room for a while, touching people gently on their hands and faces. Hans Bender then announced he wanted Sandra to take part in a particular experiment. As the trumpet floated gently in front of her face, he wanted her to gently touch one side of the luminous band, before grasping the bell-end of the trumpet firmly. This Sandra did, and she immediately felt a strong tugging from the narrow end of the trumpet. It was not quite strong enough, however, to actually pull the trumpet out of her grasp, which had been spirit’s original intention.

Hans Bender then asked me to repeat the experiment, as the trumpet floated in front of my eyes. I was happy to oblige, and repeated Sandra’s sot touch to the right side of the luminous band before grasping the end of the trumpet firmly. I also felt the very strong tugging from the narrow end of the trumpet. This time, the trumpet was almost pulled from my hand, but not quite. Hans Bender apologsed for the failure of the intended experiment, because they had not been able to make the ectoplasmic pseudopod as strong in this new location as they could have done in the Hanau cellar. Nevertheless, it was an extremely impressive attempt.

Next, Hans Bender asked for the luminous plaque to be placed upright on the urn, and Lucius obliged. It gave off a considerable amount of light, and we all clearly saw an attempt by an ectoplasmic formation like a single fat finger to show itself on top of the plaque. In so doing, the plaque was pushed off the top of the urn onto the floor, and Lucius was asked to place the plaque on the floor in front of him, which he did.

Just after this (and bearing in mind the fact that Lucius and I were sitting nearly 12 feet away from the cabinet), two fingers, then three and finally a fully mature hand emerged from under Lucius’ chair (pointing towards the cabinet!!) and showed themselves to us all a few times, so that we all had a clear view. During this display – on two seperate occasions whilst the fingers and hands were visible to us, the two sitters on either side of the cabinet were asked by Hans Bender to reach behind the curtain and confirm that the medim was still sitting securely in place. They were indeed able to confirm this – Kai had not moved!

Finally, we were treated to a wonderful display of ectoplasm, when the seance curtains were opened four times by the entranced medium himself. On each of these occasions, Lucius was asked to illuminate a red light for approximately 5 seconds, so that we could see what was happening. There was then aproximately 15 to 20 seconds between each ‘opening’ of the cabinet. What was quite amazing (and we did not realise the full significance of this until after the sitting) was that each time the curtains were opened, with the ectoplasm completely filling the medium’s mouth, Hans Bender was still able to issue clear instructions and comments in a perfect voice. Is it possible that the communicaton in the group has moved a little forward of just trance???

The first time the cabinet was opened, we were able to see well in the red light provided that the ectoplasm, coming from Kai’s mouth, had formed a large mass right down to his knees. Some 15 seconds later when the cabinet was again opened, we could see that the mass of ectoplasm had spilled onto the floor at the medium’s feet This was quite impressive – but not as impressive as the third time the cabinet was opened!!! This time, there was a continuous stream of ectoplasm down the front of the medium and right across the floor in front of the cabinet that reached some 10 feet (3+ metres) away from the cabinet!! Quite amazing!!

Clearly, the development of the group has advanced rapidly since the last time a few months ago that Sandra an I had the opportunity to sit in th Hanau Cellar. Well done the FEG – and congratulations to Kai!! Many thanks to Kai and the FEG group for these wonderful opportunities to witness the impressive phenomena.