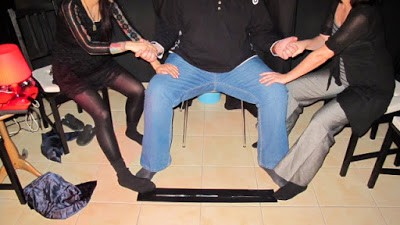 THE FOUR LIMBS- OR FULL HANDS ON-CONTROL EXERCISED WITH MEDIUM KAI MUEGGE
We would like to shortly describe the German Way of securing the Physical Medium in its chair, mainly during all phenomenal stages, besides those in red light, when the medium can be watched unmistakenly by everybody in the room.

From the year 2011 on, we are exercising this holding control – plus a super-version of it – during the seánces held by the Felix Circle Entities with its main vessel, Kai M.
It is and was always and everywhere in craft where, invited by friends, séances were internationally being held.
Usually the control-persons role is being offered to the event-holder itself, to enable him/her to guarantee the condition, the medium is secured under on its chair.

EVENT HOLDERS ALWAYS INVOLVED IN THE ‘LIVE’-SECURING OF THE MEDIUM
The holding of the medium is then executed by the event-holder together with Julia (KALIA Mind-Expansion), who both are interviewed in a high frequency by the spirit-operator, urged to describe in detail things like medium’s posture, degrees of relaxation or bodily tension to the rest of the sitters. These highly interesting informations in regards to the specific condition the medium is in when active phenomena are going on in a distance for example can be accessed quite naturally when executing the FLC (Four Limbs Control or Full Hands On-Control).

ADDITIONAL CONFIRMATION MEDIUM CANNOT PHYSIOLOGICALLY BE INVOLVED IN THE PRODUCTION OF ANY PHENOMENA GOING ON IN THE ROOM
A second stage in holding the medium in darkness is then achieved when the so called ‘super-control’ is exercised. During that stage – executed when phenomena are strong in the room – the controllers control the control of the other to assure that the holding-arrangement is in full place and the medium secure on its chair and held at all his limbs when phenomena are happening!
Even if one party would let the medium go, the second controller always can prevent any standing-up-tries by the medium.

Having that form of control in action it is absolutely excluded that the medium stands up and does something in the séance-room, neither consciously nor unconsciously!

STRIP SEARCH OF THE MEDIUM
Additionally during the last demonstrational years – at all venues – a full strip-search was executed by the event-holders or trust-persons – down to the scrotum and the area under and behind it, as well as into every other skin-fold or hairs, where objects could be hidden.
With mediums hands held into the air, and sometimes additionally flanked from there on, the séanceroom is then always directly entered.
After doing this for four years, at the moment this procedure is mainly only executed anymore at new venues, meanwhile at the most places where we had proven up to several dozens of times we were bare of things, the strip-search is done today only sporadically.

All the above described for example was in craft when Kai M. was tested by the ASSMPI, but also during other scientific testings. The ASSMPI tester even sent non-verbal demands to the spirit operators of the evening and asked telepathically for certain results that were delivered as well.

So now let’s get back to work, shouldn’t we!?