RECENT DEVELOPMENTS IN THE PHENOMENON OF FULL FORM MATERIALIZATION – A Spectral Visitor Materializes in Thun / Stages of the Process demonstrated at the BPV, Basle, both June 2018 (photos and witness-drawings)

Home » RECENT DEVELOPMENTS IN THE PHENOMENON OF FULL FORM MATERIALIZATION – A Spectral Visitor Materializes in Thun / Stages of the Process demonstrated at the BPV, Basle, both June 2018 (photos and witness-drawings) 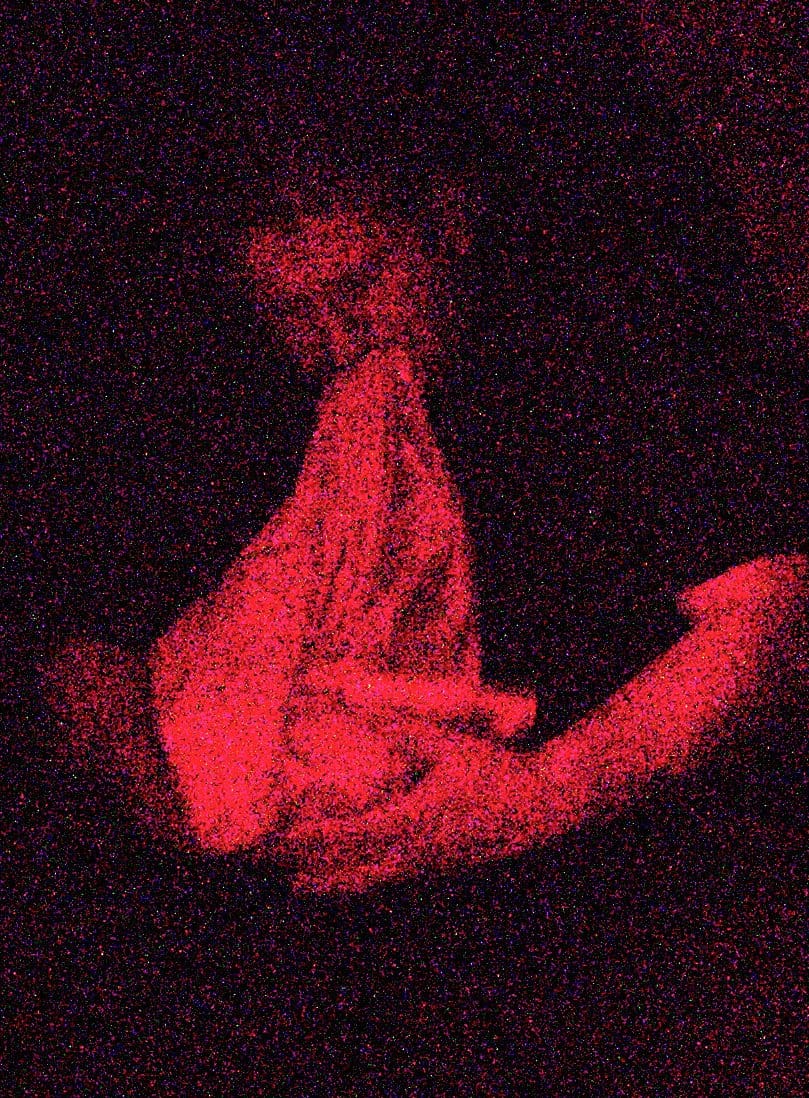 Let me pick you up and tell you about the most recent developments in working with the spirit control, mainly in regards to our attempts to achieve the phenomenon of Full-Form-Materialization. And to create an informational morphogenetic base for other Physical Mediums to link into and start to develop themselves in this regard.
I already heard of results in that field, a few weeks ago the Materialization of a little girl in front of approx. 20 spectators or so happened with an English Medium, but I am not allowed to tell more (no, not him! ;)). But a lot of people were there and / or have heard about it and so my hopes are high that slowly but surely more Physical Mediums will step forward in the future, loosing their understandable reluctance with the time and help to make these things become more and more part of a spiritual reality that much too long was reigned by those in the field who don’t want Physical Mediumship or Materialization Mediumship to happen at all.

Two weeks ago in the séances at the Basle PSI Association the spirit team again had awesome things to share. Their séances are so varied and dynamic that no session equal another. They are always different and even our extremely often present and most passionate followers claim, that there is always something new, even after dozens of sittings…!

In the three séances many phenomena happened and philosophy and explanations for most different areas and topics were given by the spirit control.
A highlight was naturally the third séance in which it demonstrated the building process of a spirit phantom in different stages and this time the camera worked: A lot of different and new perspectives developed and the sitters excitedly and amazed watched stages in the building process of a phantom first splitting from the medium, then growing taller and taller in the back of the cabinet, then showing up shortly in the front before vanishing into thin air.

But wait, there were other things happening earlier!
You remember the Col. Olcott-Materializations, the three experimental séances he tried to show himself, from time to time more detailed materialized so that after the third attempt we even could compare photos of the historical figure with the entity that materialized under the name ‘Henry Olcott’. 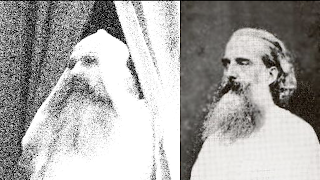 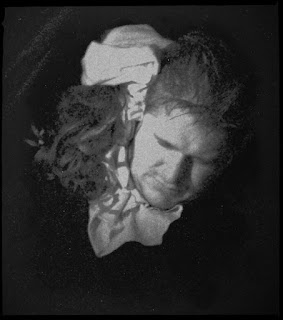 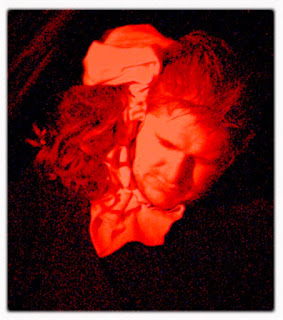 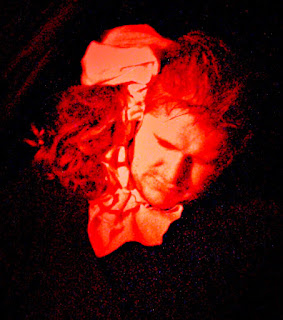 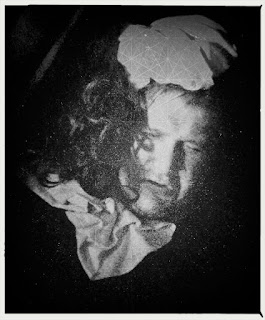 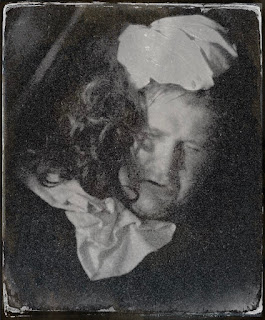 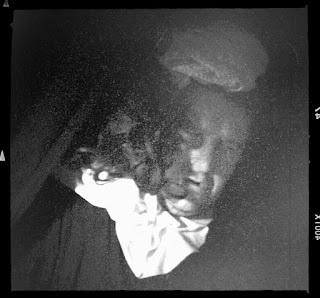 Suddenly hair started to grow from the mass and following the photographs they became more and more! At a certain point the whole mass separated from the medium and landed behind him. There it was observed in several openings of the curtains slowly building up and changing position. It was several times hard to see into the back of the cabinet but some openings revealed a figure standing behind the medium.
Shortly after this photograph was taken, the entity showed itself very shortly. My spirit team told me later who he was. I had to do with this spirit a decade ago and since then he pops up from time to time. It is a highly active spirit what finally led into our both involvement then – and it looks quite like him, using the spirit portal to show up. In the very short instance he was sticking his head out of the cabinet we can explain what the above photo is already showing: The strange structured black oval over the mediums left ear is the ring bound beard, what is pretty peculiar. Please note the Thun-Materialization had no beard, had not even a stubble at all.
Nevertheless shortly before his last exposure to the camera was executed the room started to smoothly rumble as it did several times before now when entities materialized, sometimes dramatically, sometimes not.

R.K. from Munich wrote: ‘That was the most powerful moment, the room was shaking and the spirit appeared to say good-bye.’ R.F. wrote: ‘The entity somehow communicated with me. After I recognized the shaking I knew exactly it was gonna become visible one last time…!’
The Associations president remembered: ‘The first time I witnessed the trembling I really believed it was an earthquake and wanted to evacuate the séance-room. Today that was nothing in comparison – even though the same…!’
Trembling or shaking séance-rooms are reported since the days of D.D. Home!

The entity demonstrating its gradual materialization is a famous personality actually. He is a musician (singer) of a well-known music-group of the seventees and died early. He was involved in a possession case years ago with the medium as therapist. The entity and the medium fought for the freedom of a young woman for some time and it was not fully clear if the spirit was really only wanting to help. Since then he is from time to time around and obviously helped in this particular photographic experiment…!

THANK YOU for travelling with us the borderline of the spirit worlds emerging into ours.
THANK YOU FOR BEING WITH US ON THAT JOURNEY!
Be blessed!