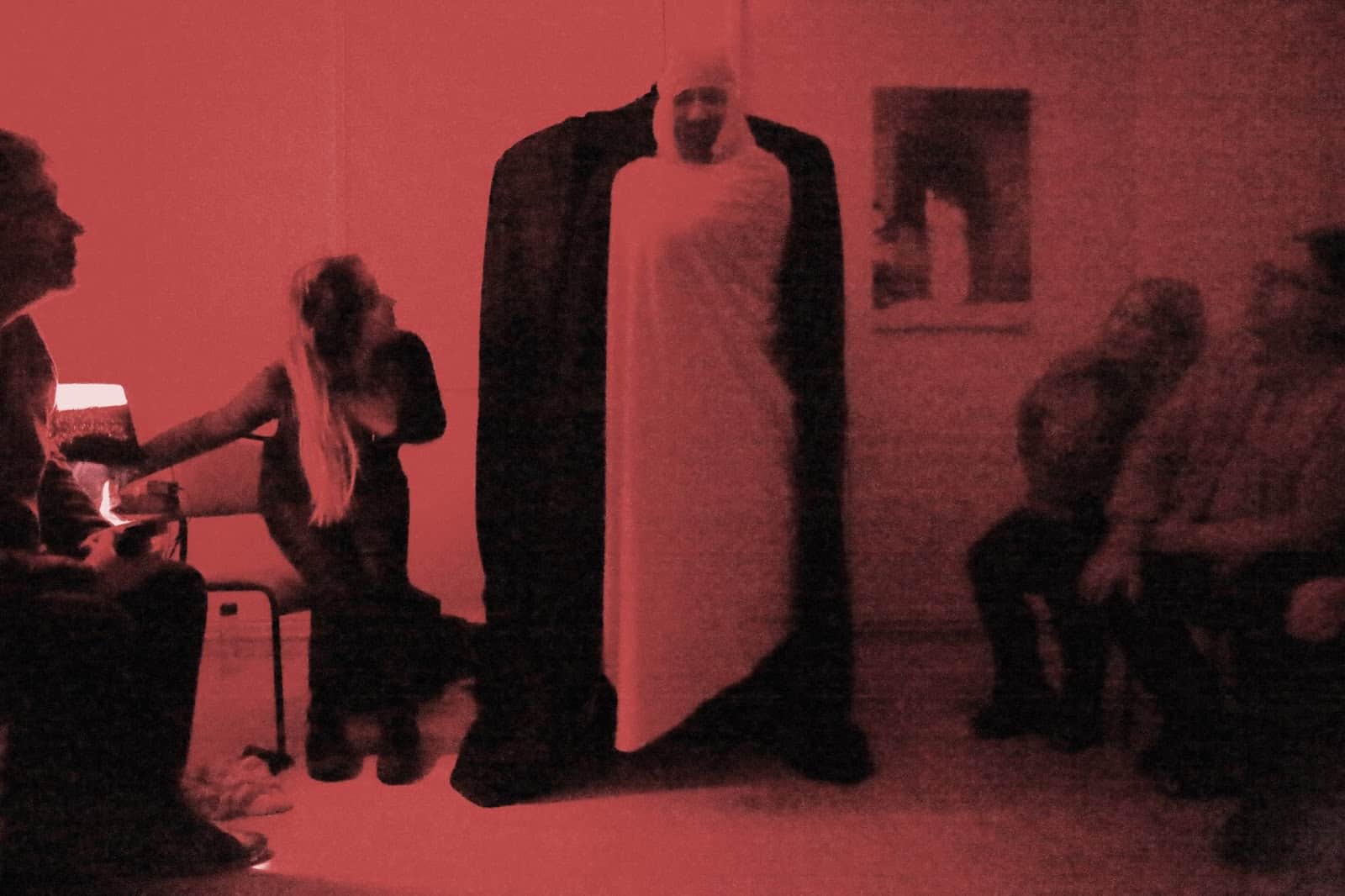 (PLEASE GO TO THE ORIGINAL TOSP-PUBLICATION BY CLICKING HERE!)
From the beginning on my mediumship as the Felix Circles Physical Medium was characterized by a strong dynamic in change and development.
From the first photographic extras achieved with polaroid-cameras from the seventies to the first apports, of handwritten messages from the deceased in waxballs, of water and rose-petals and later of thousands of objects made out of stone, glass and metals, the spirit team did never fail in producing a wide range of different phenomena.

The fully levitating tables did set in massively, distant affection of objects developed, apport phenomena started to occur under more and more conditions, all of them in red or even white light, materialization became more and more obvious when in the dark sitters saw shadows move through the room. Knocks were sounding from all over the walls and ceilings and then the first visible ectoplasmic strand was photographed coming from my mouth. Things came and went! Light phenomena did develop and exchanged with earlier phenomena, like for example the Psychic Photography, wax balls that became more and more rare as direct writings started to become rarer as well. Handforms did develop meters away from me, strictly held and in deep trance, and light dots were starting to float through the seance room and entered the bodies of the sitters. Sitters were touched by their loved ones, hugged and kissed from behind, hair was stroke tenderly, and deceased pets appeared jumping onto the lap of their beloved former owners.

Ectoplasm became extruded in greater volume and more and more ectoplasmic displays became complex and mind boggling. More light phenomena were developing and all sorts of colored dots were seen floating, blinking and shimmering in the séance room. Massive light explosions occurred and produced objects from them. Ectoplasm was allowed to be observed in red light inmidst of building processes and all sorts of objects started to become transported through the séanceroom, meanwhile the shamans drum in the corner did drum impressive indigenous rhythms and the bell chimed from the ceiling. The trumpet flew excessively unheld by any earthly agent and the heads and faces of the deceased started to appear in ectoplasmic mass!

Already during different of these early stages visitors and circle members did foretell or speculate about visible or red light-full form materialization to come with this mediumship. I was always very reluctant then, because I knew that spirits liked to walk existent paths and with no other officially existent Full Form Materialization Medium demonstrating the method, my expectations were always more low than anything in regards to this.

Finally in 2015 Full Form Materializations started to occur fully unexpectedly in a séance for friends – and this first one like all that followed were all visible in their different ways to appear. Glowing in the dark, bringing light-sources in or simply withstanding the red light of my wifes and circle leaders Julia Muegges light or torch-light!

Parallely the main communicator started to formulate a clear message to the sitters of cosmological proportions, as he calls it. It is about the meaning of life, the nature of consciousness, the planetary survival of the human race, responsibility, Multidimensionality, the Paradigm shift and the true divine nature of the Cosmological Self!

NEVER BEFORE DESCRIBED PHENOMENA STARTING TO OCCUR IN 2017
Now in November 2017 never before described séance-room phenomena have been witnessed over the last months. Ectoplasm was being seen in never before described scenarios and as an early New Years present Full Form Materialization also developed to an undenieable point of completion.

In Austria, in front of members of a society for practical shamanistic rituals for the first time a huge lump of ectoplasm flowed right out of my right eye in red light, more and more growing increasingly on my right cheek, slowly prolonging down to my chest, before building a huge droplike finish, from which a huge activation stone came forward.
That stunned sitters and Julia, my wife and circle lead, both massively who were able to carefully observe the process in clear red light from beginning to end.
A few days later it occurred again in other European countries and didn’t fail to leave all observers speechless. 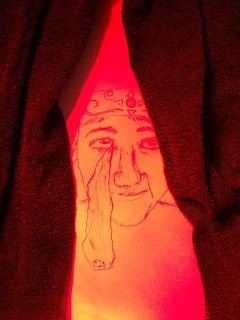 From the beginning the Circles and my work was inspirational for many and our educational efforts did help to install nearly two dozens of experimental circles worldwide. With our workshops we were getting early in contact with mediums of all caliber. One of them is Albert, 60, from the South of Germany. In the last two years a natural occurring spontaneous trance-state he was helped to develop into a momentarily full blown ectoplasmic mediumship within the FLOW-Circle, run by Germans and Switzerland Sitters. Albert has a high-ranked job in the German High-Finance and he is pretty paranoid it somehow could become public what he is doing. He is producing apports spontaneously, coming usually from his eyes with massive sizes. Ectoplasm has started to extrude from his mouth and dozens of spectacular photographies document these processes. Impressing light phenomena occur around him when sitting in the cabinet, whitish orbs of all sizes pop up and speed around him in the cabinet.

After having been privileged to attend one of his séances as one of his teachers I received the whole circle in Hanau a few weeks ago and said reluctantly ‘yes’ to a combined séance with two cabinets standing opposite and in the middle sitters sit at the walls to the left and right.
It is very difficult to get a combined séance into a true motion between trance-communicators.
So we were lucky that both communicators created space for each other and demonstrated both different sorts of phenomena and teachings.
During the session something really extraordinary happened to occur. After Albert had delivered apported objects from his eyesockets, my guide did energize it with white light shining from my fingers.
Then my main communicator said: ‘We would like to show you something that is usually happening unseen. It is a form of informational transfer on a concrete energetical base, would you like to see it? More or less during all stages of that combined sitting there is a form of non-verbal exchange that looks like this: turn on the red light!’
Red light went on and the sitters were seeing a mass looking like ectoplasm in the size of a human leg exiting Alberts cabinet and swiftly crawling or floating the 12-13 feet (approx.3,8 metres) over and into my cabinet. The camera was set ready but allowance to photograph the strange spectacle wasn’t given. To my knowledge something like this was never before described nor seen in a combined séance of which there were many over the decades…
I created this with the help of Julias and others descriptions:

Josy from the FLOW-Circle wrote in her séance report: ‘We see a long thick bulge ectoplasm, 1 metre long (3,3 foot) coming from Alberts cabinet wiggling like a snake towards Kais cabinet, totally detached from anything, where it suddenly lifts ‘its head’ and disappears on ground level like a hurrying animal. What we saw was deeply fascinating.’

At the end FLOW-circles circle leader photographed in quite a spectacular manner again ectoplasm coming from my eyes in the ending stages of the combined sitting between Albert and me, that ended after 80 minutes and made the sitters lust for more. We will see!

Let us have a look at some of those:

After two days of visit the FLOW-circle left us again and we started to prepare for our visit in Switzerland at the Switzerland Parapsychological Society in Zurich and the legendary Basle PSI Association. Specifically our séances for advanced sitters in Basle should push the boundaries further again!

NOVEMBER SPIRITS MATERIALIZE FULLY
Our visits at the PSI Association have a history of visitors and interested other mediums and activists from development groups so that many of them come for years and have visited literally dozens of séances.
For them we hold advanced séances, in which the atmosphere is in the meantime really familiar, at least much more familiar as in séances for new sitters, that we’re giving with strictest control of the medium to satisfy all demands and expectations!

The November 2017 advanced séance was starting with a lot of spirit and philosophy for the twenty sitters, then the many materialized objects that were in the possession of those sitters were brought forward and in the most colorful light these were then ‘energized’ by my Spirit Team.
When I am entranced by the team, they use my bare hands. In them, they hold materialized stones of different color, which like explode there, so that the whole room submerges into that color and the sitters as well.

A lot of objects were again spiritually manufactured by the team, stones small and big, figurines, a lot of objects again were falling from eyes, ears, nose, mouth. Impressingly they usually inmidst of the controls speech to the sitters in red light fill up the mouth massively, so that talking has to pause until everything is extruded…

Now it was time and the spirit control announced that the sitters would witness tonite a materialization of beforehand unreached completion. Everybody was amazed!
And only a few seconds afterwards Julia was already hearing the signal for the red light.
What was then revealed to the sitters was an unbelievably well visible spirit entity! My communicator Hans said to the sitters that they were privileged tonight to encounter one of ‘the most renowned humanoid doorkeepers both from the heydays of the movement and from modern times also!’
‘May I introduce you to the incredible JOHN KING…!’

Somewhen even the most exhaustive 20 seconds of undisturbed time to watch the spirit visitor are over and the lights are switched off again. But only a few seconds later another signal for light was being given from the cabinet and the switched on light revealed the medium sitting in the back of the cabinet and a thick strand of ectoplasm runs towards a pool like formation in front of it, where the visitor just stood, now like an empty bag!

We are delighted to have shared today the last months most astonishing images we could ever achieve. I want to express my thankfulness to my wife Julia, the Spirit Team, Communicator ‘Hans’ and his ‘Alchemists – and naturally to all you sitters out there. To our staunch supporters and photographer Markus Kappeler, who did again a brilliant job.
Also towards the staff at the Basle PSI Association I feel deep affection and gratefulness,
specifically towards President Lucius Werthmueller and Sabin Suetterlin.
May these images inspire us all for the new year to come, understanding there are no boundaries!
THANK YOU!
And…AD ASTRA IN UNION!