Some of you may have read our small ‘diary’ in facebook or the announcement here on our blog:

In the third year of investigation, Prof. Stephen E. Braude,

together with two german parapsychologists, Dr.M.Mnahm (Author, P.A., SPR) and Dr. J.S.(P.A., Research Scientist) and the american filmmaker Robert Narholz, organized a final arrangement and a fully controlled environment for FEG-Spirit Team demonstrations, to be enabled to publish a waterproof special edition of the JSSE-Journal about physical mediumship as a whole with emphasis on their personal experiences with the FEG Medium Kai M.!

The JSSE, the Journal of the Society for Scientific Exploration, Braude – as last year retired head of philosophy at the university of Maryland – is editor of, is one of the rare scientific publications on different forms of anomalies, that has a strong stand within mainstream science!

So to fulfill expectations on this grade for a special edition of the JSSE, Braude chose this time two german colleagues with many years experimental experience with the FEG and for the observational needs, Robert Narholz, the film-maker, to have everything documented on HD Video!

A whole setting was created and installed to prevent fraud in every case and to defend expected attacks of all sort!
Robert Narholz comments the scientific protocol: ‘The phenomena of physical mediumship have been documented many times in
the history of psychical research. Never before, though, did all the
situational variables add up the way as they did during the “Austrian
Week” in Aril, 2013. The self-sacrifying cooperation of a gifted medium,
the experience of a team of renowned researchers and cutting edge 21st
century technology made it possible, for the first time ever (in that quality), to capture
– on video – a full table levitation, as well as various ectoplasmic
sequences!’
Stephen Braude declares: ‘Our May, 2013 sittings with the FEG in a private Austrian farmhouse are
of historical significance. Under exceptionally tight conditions
(including, e.g., strip search of the medium, continually locked seance
room under my control and locked during seances from the inside, and
full limb control of the medium during phenomena), we obtained
undoubtedly the best video ever of a complete table levitation, and
certainly the only video of a table levitation under such good controls.
We also obtained unprecedented video footage of the medium extruding a
large quantity of ectoplasm from his mouth and spreading it with his
hands, revealing some of its structure. In addition, we received two
intriguing apports under good red light and careful close-up
observation!’
The protocol did contend for example these safety measures:
– an undisclosed location in Austria
– no sitters (besides 3 scientists, the documentary filmer, an academics wife

and Julia)
– full control by the scientists over a permanently locked down seance room
– documentation and filming of every preparation done in the seance room by the the medium or his wife (with at least one additional ‘guard’ for each Julia and me)
– additional post-check and search, after the already filmed preparation of seance room, of every prop brought into the room
– full strip search previously to Seances conducted by Prof. Braude himself under the control of an attending physician of Medium AND Julia
– with hands in the air, medium was guided by two controllers to the seance room, one walking behind, one in front of him
– total separation of Mediums Wife and Medium even after the strip search
– the enduring full hold control during ‘full table levitation’-phenomena: hands of Prof. Braude and Dr. J.S. on Mediums hands (laying on tables surface), knees at Mediums knees and each of their feet on Mediums feet, same with Julia (under these conditions table full levitation was filmed)
– Control arrangement when oral apport was announced by the medium: full checking of mouths interior with white light torch in bright red light and enduring hold of hands and feet
– Control arrangement for second apport in midair above the table, previously announced by Medium: full hold control of mediums hands and legs, especially Mediums hand from which it should fall was hold and checked several times by Dr. J.S. and Prof. Braude, who touched and searched several times the outstretched hand of the medium – and by all others who observed, what was going on in bright red light – until the object finally visibly and audibly fell from the mediums hand, doing rubbing gestures in mid-air
– full body-post-control after ectoplasmic ‘out-throw’ – exercised by a physician.

So the procedures the medium Kai M. underwent were very special and the whole week was psycho-emotionally very drawing.
Kai says: ‘I was no regular part of the group, and even though being its main protagonist, i could not really relax over the week, knowing every mimic of mine could maybe somehow be misinterpreted in the one or other direction.

So it was amazingly stressy….!

In the end everything had worked out fine and we had achieved what we were coming for and what was makeable during one week with such a group,

never experimented before in that constellation and in a new environment!’ 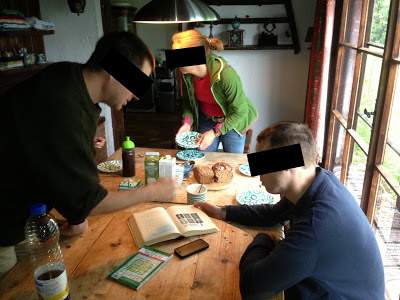 WHAT WAS WITNESSED UNDER THESE STRICT CONTROL MEASURES

The rare hungarian book about his mediumship one of the attending scientists was translating at the time and the group was looking at photos and other content of this fascinating document several times!
Additionally Prof. Braude was showing the original apported gold looking foil of his main protagonist of his book ‘The Gold Leaf Lady…’.
Previously to the first Seance the foil was then not only located as an mediumistical ‘anchor-object’ inside of the séance room by Braude, he moreover explained shortly beforehand the foil was made of 80 percent copper (and of 20 percent other materials like Zinq), what a few minutes later should be of main significance!

So the group started the first night with the battery of cameras ready, but did not use them.
Everybody was aware of how diminishing the presence of observational devices could be in a mediumistical setting and even though they were to be used extensively in the following evenings, the first night they were offline!
The mediumistic energy was wanted to be established undisturbed during the first night.

So the group wasn t really expecting observable apport phenomena of such a power, additionally previously announced and then so closely observable in light!

But after different table movements the medium suddenly claimed it believed something was coming up and requested the researcher not holding his hands to bring – additionally to the bright red light shining on him – the torch to observe closely.
The medium claimed an oral apport could happen!
So his mouth was thoroughly checked manually under bright white light conditions! Kai was eager to make it undoubtedly clear his mouth was empty, he stretched out its tongue, showed there was nothing in the cheeks, shook his head with open mouth and outstretched tongue facing downwards until it could be unquestionably stated, there was nothing in his mouth!

Only between three and five seconds later, the already obviously entranced medium opened its mouth and ‘with a considerable speed an object shot out of it and landed on the tables surface’ (Braude)!
It was a salt- or crystal like looking object in the size of a small finger (see photo).

The second apport then happened only a few minutes later with medium still in hold control – and with a for FEG apports typical coincidental factor: The in the meantime considerably entranced medium declared, the ‘chemists’ (the spirit scientists the FEG works with) were manipulating the present gold foil from the ‘Gold Leaf Lady’ to draw traces of its main material from it.

At that time, Kai M. had oustretched his right hand and – still hold by the controller on his right hand side (left hand were hold as well) – started to do rubbing gestures in the air.
Three times he requested to have his outstretched hand checked thoroughly, what was extensively done manually by Dr. J.S. and by visual confirmation, a bright red light besides the table made everything well visible. The medium turned his hand in all directions in the bright red light, to enable everybody to see there definitely was nothing in his hand (Medium wore a short armed t-shirt like in all seances)!

The drawn traces of foil-material, the medium declared further under the influence of the spirit scientists, were in a second step enabled to attract more of it from the direct natural and artificial environment of the location.
Having this just said, with a sudden bang – and only seconds after the last manual check of the still outstretched hand – a considerable large piece of copper fell from the mediums hand in front of everybodies eyes (see photo) onto the table!

The second sitting was meant to film the full table levitation under full control of the medium and its wife!

After an hour of very active table movements and partial levitations, the full levitation was first happening in the dark before the red light was switched on to have it on film! Waht then was recorded, we believe may represent the most persuasive film document of a table levitation, especially when it is known under which circumstances it was made and who had sat at the table!

For this reason the short film document won t be shown, before it can be explained in its context – in the documentary FINDING PK of American documentary filmer Robert Narholz start of 2014.

Privately the film will be shown around of course, but it cannot be sent anyhow via www.

Then in the next sitting, the cabinet seance, the control measures found their climax!
The goal was to show if ectoplasm is real and if it could occur under 100% of strictest control – and if it can be filmed under these conditions!
The opportunity to film was long since discussed with the chemists!
So it happened that despite the stress, despite the small number of sitters, several first ectoplasmic compactions could be caught on (digital) celluloid:
– The out-throw from mediums mouth in considerable quantity and
– the breathing, flexing mass on the ground, rudimentarily morphing into undescribeable forms in front of the medium in red light and
– the medium fully enwrapped in the ‘ectoplasmic cocoon’!

as they are also regularly being described we hope to film also somewhen in the future!
But is it less WHAT was filmed, but more UNDER WHICH CIRCUMSTANCES it was filmed, Stephen Braude is terming ‘historical’ without hesitation!

‘By allowing rigorous controls and conditions of sufficient light Kai M. has opened the door to a new era of psychical research. And I am humbled to be part of this process by including the story of the Austrian Week, as well as the evidential videos that have been obtained, in my upcoming feature documentary Finding PK, Robert Narholz adds.

We hope that our efforts will help to establish the credibility of Physical Mediumship and their protagonists worldwide!