The Scole work in the years 1995 til 1998 included several photographic experiments with brand new films. The outcome of these experiments was absolutely fascinating.

There are several publications available on the Scole sittings in total such as:

These publications describe all details of the film experiments including our signed witness reports, so that there is no necessity to repeat it here.

I just want to again make a clear statement: We, myself and my wife Karin are 100% convinced of the genuiness of the 30 Scole sittings we participated.

In particular the following film showing glyphs and some German words “Wie der Staub” etc. was controlled by me in such a way that there was no doubt left at all: it was bought by us in a normal Foto Shop in Norwich, it has always been in our hands, before, during and after the sitting and it was in addition secretly marked by myself. There was no way to manipulate something and the result of the experiment was again magnificent.

Dr. Hans Schaer participated in this experiment and Hans too carefully observed everything happening.

The follwing picture shows the film in total length with words, symbols, glyphs and a lot of lines connected to them.

On the right side you find the German words: “Wie der Staub in … Wind” translated in English:”Like the Dust in … Wind”. In the middle part are 2 symbols and in the left part 2 blocks of glyphs, in total 58 glyphs. 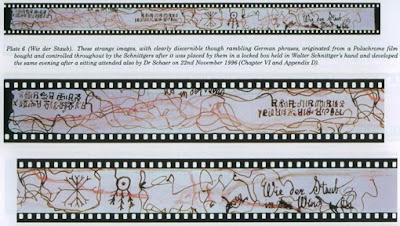 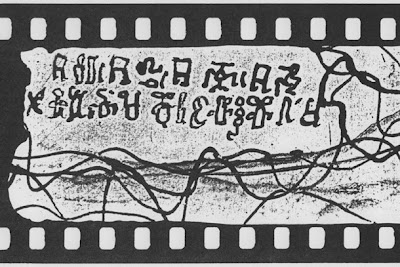 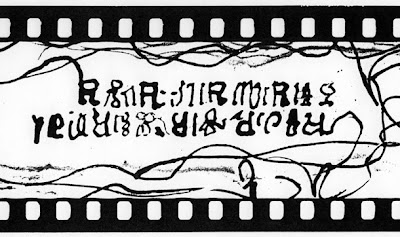 We spent quite some time in 1996/97 in libraries and the internet but we did not succeed in finding the glyphs. We then gave it up.

Now 13 years later, it was a wax-ball apport in the Dec.15, 2009 Felix Circle sitting that showed signs on a small piece of paper similar to the Scole film glyphs that triggered off a new attempt in search. (See separate report in this homepage with title: Felix Circle Dec.15, 09)

With this apport in hand the motivation was high enough to spend a lot of hours in the internet and finally we found it. The glyphs are identified with those on a wooden Easter Island tablet, the so-called Small Santiago Tablet.

Tablets are rare now. Religious prohibition has resulted in the destruction of almost all tablets, an awful loss for the Easter Island culture. More information in Easter Island wikipedia.

It was the homepage http://www.rongorongo.org/ that allowed us to find the glyphs. A big compliment to the operators of this site, it is a comprehensive coverage of all Easter Island glyphs and tablets and their background. We have used a few of their pictures to show the tablet to Scole film comparison.

It is important to mention that the glyphs on the film are in handwriting, a fact that made it a challenge to find the origin. Several glyphs are simplified as if they were “written” in a hurry.

The Small Santiago Tablet – The Area of Scole Film Glyphs

In the following section the Scole film glyphs are compared to the Easter Island glyphs.

Some remarks how to read the comparison: 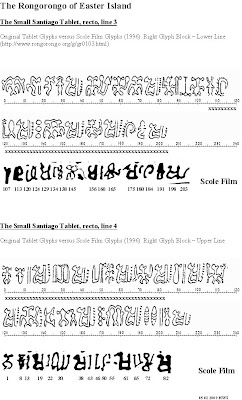 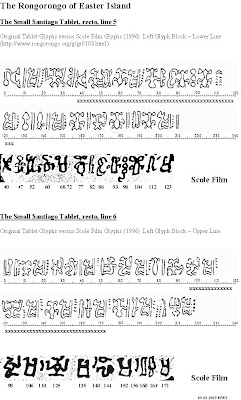 The glyph in the middle of the fim is an Easter Island glyph too. According to the official Easter Island Glyph denomination as to Barthels it has the number 31 (http://www.rongorongo.org/signs/g001099.html). 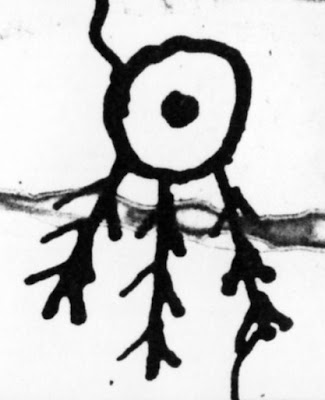 The fact to get something rare like the Easter Island glyphs in handwriting on a Scole film is already very extraordinary.

There is still the question why just these glyphs have been chosen. So far we do not have an answer to this.

But we very much appreciate the effort undertaken to open up human mind for things that normally are considered as impossible.

Bios:
Karin and Walter Schnittger are interested in spiritual matters and philosophy for 25 years.
Among many others they participated in the Scole sittings many times.
Their homepage: www.claudius-portal.de has started to provide information
received through half trance dialogues with the Claudius Congregation.