Note of the Editor:
The Seance at the 14th January was a remarkable one. Not only were phenomena of the last cabinett sittings obviously increased, new additional ones were observed and finally the team of spirit scientists wanted to create a historic event by displaying something that was in Germany not more presented to a group of interested observers since the fifties. Because this had to happen quickly in red light, the circle leader was advised to photograph during 2 or 3 seconds into the gap between the two cabinet-curtain-halfs, that were opened too quickly for the human eye to attach to the light conditions. The photo should prove what was actually happening inside of the cabinet. Displayed here is only the anonymized test photo, shot ten seconds before the one that was planned to show a completely materialized hand and streams of ectoplasm in red light. I overhand now to the witness and his report. Enjoy!

WITNESS REPORT BY DR. J.B., LAWYER, 44 yrs.
The Seance Room was occupied with 14 sitters, sitting closely at one another.
After Instructions from the Circle Leader and a prayer the medium started to bring itself into trance – shortly afterwards Hans Bender was coming through.

Nevertheless it took quite a time until the first physical interactions became recognizable.
Obviously they were connected in a way with a permanent level of sound.
Bender explained, that the spiritual Scientists use the energy the sound waves produce.
At last the recorded tape will display what was said or sung and how long – and also how the trumpet was quasi motivated to lift itself by the sung Om-Mantra

So let me carry on to describe the phenomena witnessed by me.:

It began with a short sound of the windchime (ca. 6 feet away from the cabinet under the ceiling, inmidst the room), that was also heard later again 2 or 3 times.
This was followed by the sound of a hand touching walls and ceiling, like a knocking, clapping, then a scuttling or crawling, mostly on the left side of the room, where the circle leader was describing, that the scuttling hand-sounds were directly localizable on the wall behind his back and over his head.

After some more instructions by Hans Bender morphing, fur-like shapes or structures appeared above the illuminating plaque, one could observe in the darkness as schemes being even darker than dark. These shapes were described by the Circle Leader as “Gremlin-like”, with dimensions of a basket ball, with mouldings, either with a „furry-tail“ on the „head“ of the shape – or an acuate formed “claw”, actually peculiar fur-like.
Later a complete, authentic formed adult-hand came over the plaque.

Following the commentaries of Hans Bender this was the outcome of the metamorphosis of the „gremlin“-shape condensing into something we are able to recognize and identify.

During this phase, some sitters were touched, to my left the well know English Medium Simone Key, who was one of the 4 guest sitters of the evening, and opposite female sitter Stefanie and the circle leader Jochen.

Repeatedly something crawled upwards his leg and „sat“ for a short time on his lap!

The trumpet was levitated two times, every time for several minutes. The first time it was performing a knocking-attack onto the ceiling, the second time it was looking into the eyes of sitters, floating steadily in head height – coming very near to me and actually more nearer to my neighbour Simone – so near, that I was persuaded it must have touched her, but what Simone later negated.
Simone was announcing several times, that she was aware of a tremendous high energy inside of the room. 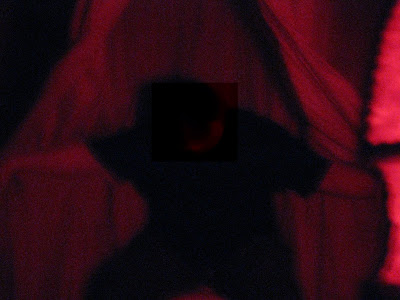 Picture: Test Picture, shot seconds before the materialised hand should have been shown in a stream of ectoplasm and been photographed to prove to the sitters.

Then followed after several successful tests, during which the medium was photographed in red light without flash, the final experiment of hans Bender and his “chemists”.

Like in the test-runs we were counting from 10 to 0. At „5“ the red light was lit. At “3” Hans Bender – who had announced just previously that he was now in complete control of the most bodily functions of the medium – opened the curtains and immediately afterwards the circle leader photographed into the gap of the curtain-sides.

The sitters, that were positioned opposite to the cabinet were seeing a white substance out of the mediums mouth, resembling on first view a necktie, covering the upperbody and down to his lap or upper legs.

Me myself was only getting a too short view on this (…), additionally partly covered by sitters heads stretching to watch, that I am no good witness for his instance. I have only glimpsed: There was something on the medium.

Jochen was shortly showing his photographing result to his neighbour, but when he a few minutes later wanted to show it to all the others, it was vanished from the cameras memory, resp. totally blacked out.
Nothing else but darkness was left on the photo.