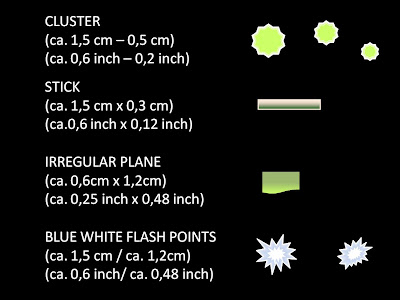 Picture: Different but objective Light Phenomena have come up in Felix Group Sittings. In reality the lights, especially the blue-whites were totally brilliant, meanwhile the yellow-greens appeared like a torch shortly lit. As a matter of course no torch was in the room.

by km
As you may know, the Felix Groups main activities were in the last months booked by our cabinet sittings. With large steps our spirit team leaped forwards to bring us in every single sitting new phenomena or obvious developments of known ones.

More than once we stood speechlessly in front of this and could express our gratefulness only through our excitement and astonishment about this cornucopia.

So it seems nothing special, when I want to announce today and inform the humble reader about a totally new effect, seemingly becoming more and more stable during our last two table-sittings.

As you may know our main spirit guide, the deceased Prof. Hans Bender is permanently motivating us to come together for table sittings – he calls them “group consolidations” – to strengthen one of the most important factors in the paranormal play of the Felix Circle, the group, its purposefullness and the positive relationships within.

So it came – after a new hint of Hans Bender about the necessity what this concerns – that we performed a very intensive table sitting-session last week.

During the table sittings no-one is in trance centrally, like during cabinet, but through intensive meditations and soft posthypnotic orders, the group slips into a mood, that is special and that causes the ENERGY BASED PHENOMENA following Hans Bender.

Originally we once were a pure “energy based circle” following Foys/Bennets Scole Group
paths – and all achieved successes before the “cabinet-era” were regarded as energy based phenomena.

What was itching us for years, was the absence of the intensive spirit light phenomena, that were described in the Scole Report exhaustively because there it was (one of) the main phenomenon at all!

In the Felix Groups past there were a few cases of which actually only one had a objectiveness and high validity: the light-incident, that led to the appearance of a pencil-scribbling of an unknown man’s face. 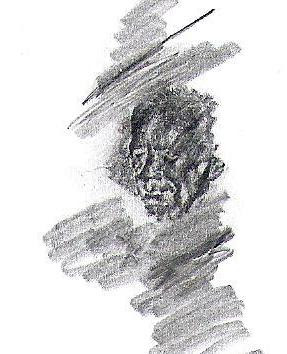 Picture: Appeared 2008 on a controlled DIN A 4 Papersheet, after a red light was travelling the room and into the cabinet, where several focus objects were positioned, under them the paper sheets.

Now last week it happened, that permanently groups of 3 or groups of 4 saw lights, the others could not see until suddenly the whole sitter group was screaming out unisono “I have seen it!”!
It was a cluster of light suddenly flashing off in a row, like fireworks that are dying down one after the other.

Already last week we were recognizing it is actually something new again and until the closing of the seance, between jumping and levitating tables frequently obvious objective clusters and single lights popped up – some green yellow, some white blue.

With excitement and concentration we started yesterday, Tuesday evening, the 23. Februar, the following sitting. Relatively soon it became obvious: Phenomenon seemed to be stabilized and we had the privilege to watch the lights pop up here and there during the whole evening.

Additionally I have attached a sketch, of what our group has multiply seen during the last two Energy Sittings.

We are very thankful that the energy based setting seems to develop further on as the cabinet does at the time – even though cabinet sittings are allegedly “ectoplasm”-based (Hans calls them “rigid energy”).