EXCLUSIVELY: A PARANORMAL DIDACTIC PLAY or THE MYSTERIOUS MONK AND OTHER AWARENESSES – PART II OF “A PSYCHIC PHOTOGRAPHY CASE STUDY”

Home » EXCLUSIVELY: A PARANORMAL DIDACTIC PLAY or THE MYSTERIOUS MONK AND OTHER AWARENESSES – PART II OF “A PSYCHIC PHOTOGRAPHY CASE STUDY” 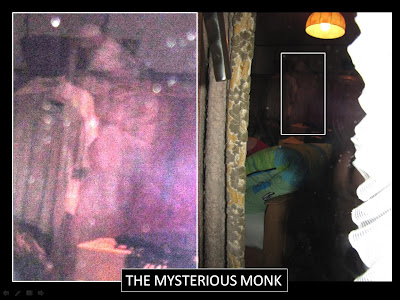 The first Juli 2009 Hadia was following an impulse and photographed through an open balkony door into her bedroom. When she was examining shortly later the outcome it did not take long to discover… 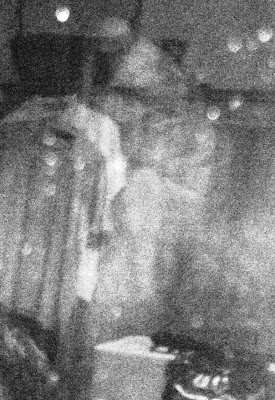 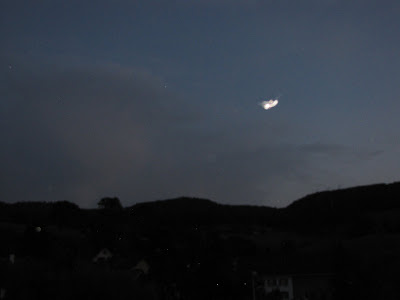 When Hadia N. contacted me in Summer 2009 the monk was yet to appear.
But being urged contacting someone – I was lecturing at the time in Switzerland among other topics about “paranormal photography” – and so it came that I learnt about Hadias frequently appearing “unidentifieds” on her photos.
Anomalies like for example lights at the night sky (photo above) were part of a seemingly broad phenomenology of photographic anomalies showing up… 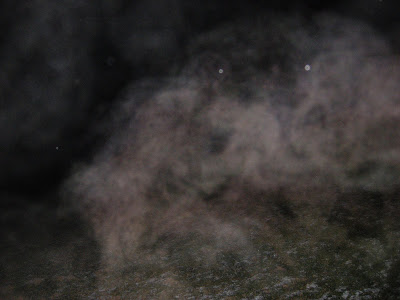 …like such strange and unidentified fogs f.e. – photographed above a lawn behind her house in winter (Hadia is mother and a non smoker) – when no humidity in the air could explain this …. 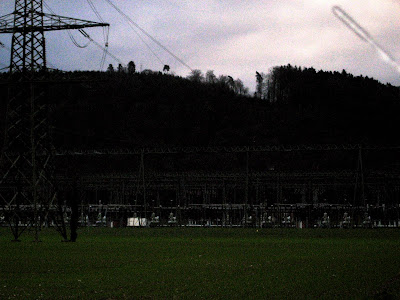 …or this “object” in the sky! What is this? Maybe only a failure on the film material she used in the two cams that produce the photos!? No, this is excluded, the anomalies appear on digital film!

Is that maybe a kind of usual condition? Unexplained structures on film? Do we all get them, but do not recognize them maybe?
How often do you see something on your photos you really cannot explain?
After a look through hundreds of private digital photographs and a row of interviews among friends and acquaintances I was rejecting this idea.
Absolutely nobody was reporting having unexplained things on digital photos.

Interestingly it was the Death of her Father she was somehow connecting with these structures and lights and sometimes they seemed actually to contain messages from him referring to past incidents, like the photo with the cut weddingrings. 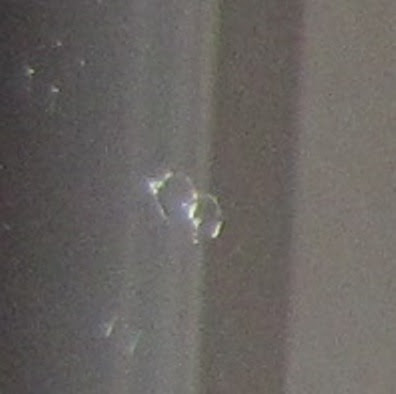 Shortly before her fathers death from his swollen hands his wedding ring had to be cut off, about what he was deeply suffering. Shortly after his decease she was finding this image above, on a photo showing her living room wall and a framed picture of her father that is hanging there.
Naturally she constructed a connection beteween what the photo was showing and the ring-incident.

Hadia was finding on her photos more and more of a broad array of things she could not explain. 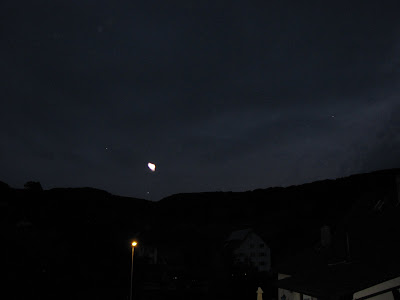 And they kept up popping in nearly weekly – nearly everytime she took one of the two (digi-) cams, a Nikon Coolpix P4 and a Canon Powershot SX10 to photograph something… 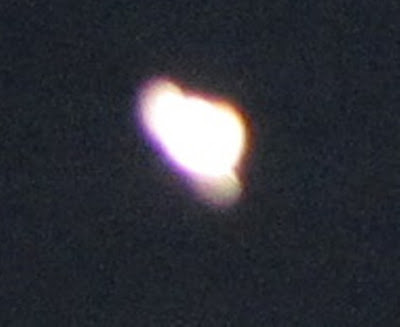 …the Unexplainble showed up dependably, like in this Photo of an unidentified light in the Night Sky in the vicinity of the house of her family… 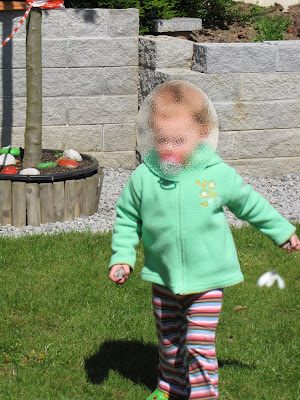 …or this aetherical entity at noon in her garden… 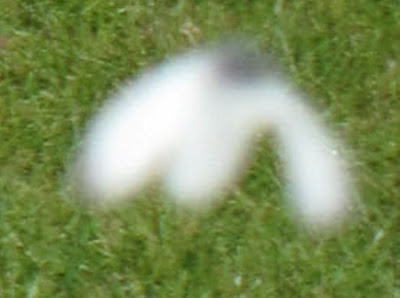 …she also had never get on a photo before or after and that even couldn t be finally identified after several inspections of photo experts.

Yes surely, this could be a blossom, this could be a butterfly, but the image neither contains typical characteristics of the one nor the other and was thus at last a further unidentified in one of her photos.

And then there were at least two photos that in fact seemed to show, that actually a peculiar anomaly was taking place. Admittingly there were also some interesting orb photos,

I haven t mentioned, that showed a bit more content than normal dust-particles blowups should – but what persuaded me that there actually was going on something were these following two photos!

THE FLYING MANEKIN
At that time Hadia was “ignited” by the expectation to gain “paranormal” images on her photos and tried to induce getting them by for example snapping into mirrors or in the following example into the night sky from her balkony:
And actually it did frequently happen – again and again! 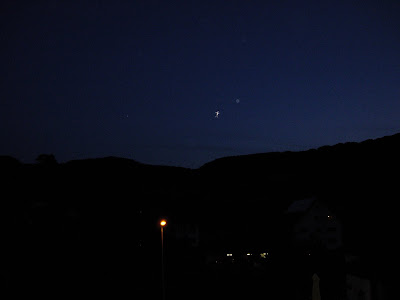 Far away – within an area of the sky she many times before had get the flying lights now a surprisingly subtle object arrangement was showing up: A glowing flying Figure, seemingly far away but very well displayed against the Night sky and a mysterious glowing sphere or orb some meters besides and above of it. 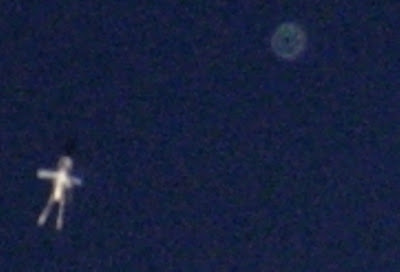 Different blowups of the photo, showing f.e. the heat and light allocations and no hidden structures – lead eventually to nothing.
We checked every event in the vicinity where maybe illuminated balloons or kites may have played a role but found nothing.
Actually it was not before a few days after Part 1 of that article was published on Robin Foys Site the “manekin” was finally identified…

THE “HAND”-ANOMALY
The second photo I was considering as “hard data” was the by then most persuading photo in Hadias Collection – besides the “Mysterious Monk”-photo – that showed something that looked like an energy vortex or whirl and that was neither nobody able to identify nor explain not at least in parts.

I was even discussing the case resp. the photo with Dr. Walter v. Lucadou, the leading German Parapsychologist, who has the most experience in the field in analysing unexplained photos and even he was not able by no means to explain the shown object. 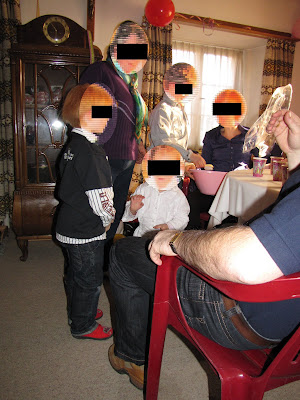 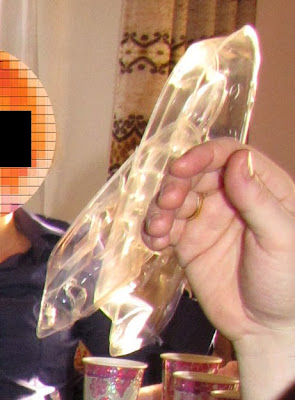 Looking nearly liquid, living, flowing – like a mass of water in mid-air… 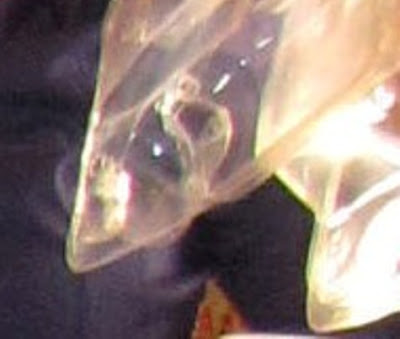 …with obvious protruberances or whirl-like areas reaching over the borderlines of the structure.

What the heck was this? Besides Dr. Lucadou we also contacted a specialist in digital photography who assured us that this was by no means any known digital photo-anomaly.

Comparison photos we did with different kinds of plastics and foil also did not show the extrapolated inner structures of the “anomaly”. 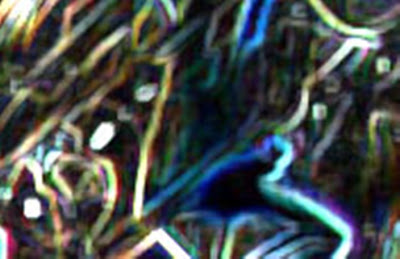 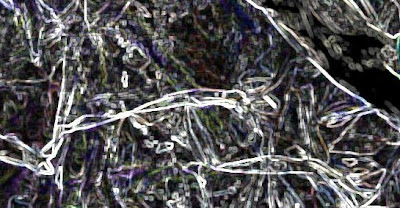 Still riddled by this example “the monk” popped in!

PARANORMAL OR NOT
After examining thoroughly “the monk” and finding no way how this figure could have anyhow emerged as a simulacrum out of the photographed surroundings I did group the photo to Hadias best outcomes.

To be honest, until the monk photo was appearing, from my opinion the case was rising and falling with the two core-evidence photos “manekin” and “whirl”.
I knew, if these could be explained finally the case could not uphold its claim to contain something worth to explore.

Orbs with inner structures and faces (see part 1), unstructured lights in the night sky, some peculiar face anomalies (see Part 1), the mysterious fog (some refer to as “ectoplasm”) and f.e. the daylight blossom/butterfly-thing neither hadn t – in my eyes – enough substance to render the case persuading nor would I ever have published them in an article!

It was already in one of my first discussions with Hadia I learned an important lesson in connection with the case, that today appears as maybe an interesting hint reg. the nature of the anomalies.
Among all her presented photos it was possible to identify one that was seemingly showing something unusual, but after several requests and a tour into the surroundings it came out, that the photographed “Gwaeggi” – a mythological figure – was nothing but a man-high glass-sign standing in the fields showing paths to promenade.

Then it happened that i was remembering another case when someone was allegedly photographing glowing elve- or fairy-like flying figures that turned out to be insects.
Suddenly I recognized, that the assumed distance to the object had lead us on a false path.
I again watched every of Hadias night sky photos very thoroughly and found the final evidence – in my opinion – that identified the flying manekin as an insect. 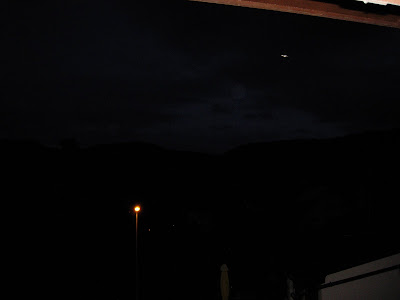 What appeared in this photo as another far away night-light…. 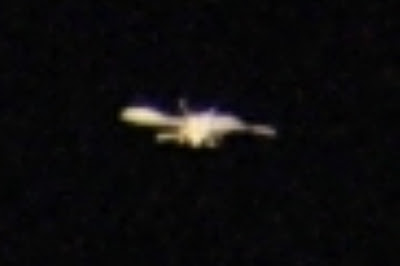 … was in reality a much closer insect, illuminated by the flash of the camera.

Then this photo did close the manekin-case finally: Another group of insects by another photographer who also thought at first sight having photographed something unusual:

So one of the two legs my case was standing on was thus amputated.

Was it thinkable that such a failure – simply considering something not as close as it really was leading to such a harsh misinterpretation – could also be taking place in the whirl-photo?

So I urged Hadia to check again all possibilities and to send all photos existing from the family gathering in.
After being sent ca. 20 photos of that day I started to examine them inch by inch to discover something interesting: 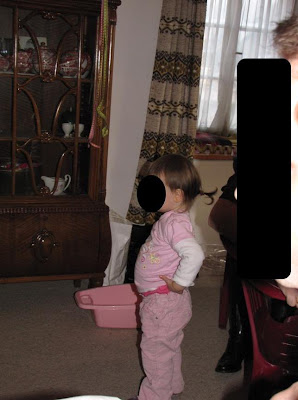 Below the window I discovered something that showed intriguingly a resemblance with the hand anomaly. 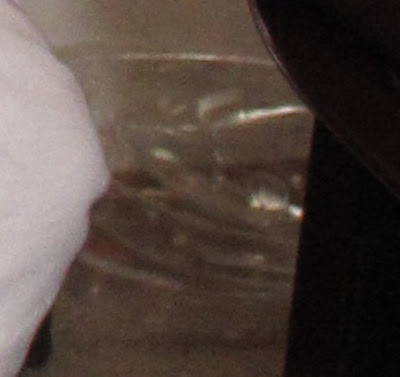 Picture: Blowup of the above picture, showing something in the background, that seemed to resemble the mysterious hand-whirl…

Then quickly one piece fitted into the other: During the day some relatives brought for one of the children a wee plastic bathtub. Covered was this tub by a piece of especially formed plastic in which several bath-reelated objects were contained, like baby-soap, a scrubber or brush aso. 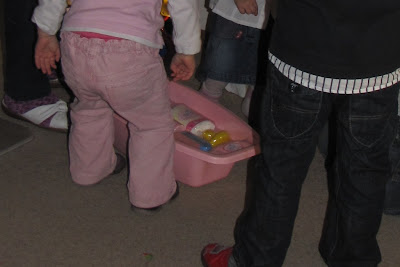 In the photo that produced the anomaly it is in fact NOT the man in the red chair, but the woman in the back that seemed to uncover the bathtub… 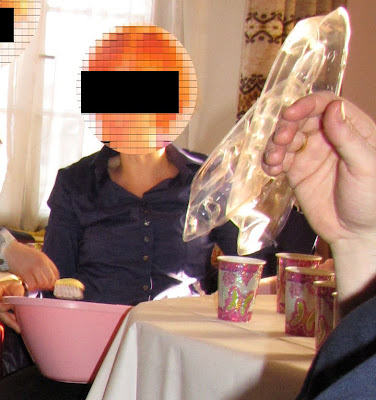 … and holding the empty plastic away from the kids and into the intruding sunbeams, that were illuminating it in this way.

So was the case explained away? Debunked as misinterpretation?

But what is with the monk? When the former main photos of the case were solved, could there be a third one showing some kind of paranormal effect? And what is with all the other photos?

IS A PARANORMAL EFFECT CONCEIVABLE THAT MAYBE CAUSES COMMON THINGS TO APPEAR ABNORMOUSLY ON CAMERA?
What can be definetly stated is that Hadia was and is still getting obviously a overproportionally
huge mass of unidentified “anomalies” in her photos of which some maybe by thorough inspection can be explained.

But what causes things to appear obviously strange in such a mass?
And is the monk also explainable at all?

The monk is actually an interesting image and please consider that it was not photographed through a window, even though it looks so. The balkony door is open and through the gap it was photographed! 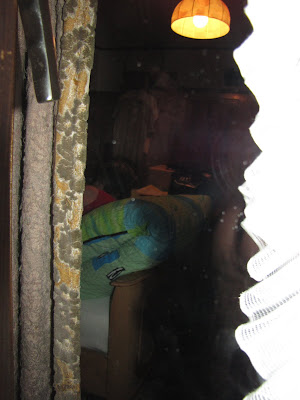 Considering this the light forms besides the curtain are also very interesting. 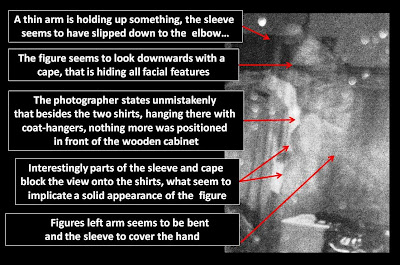 Insprecting the monk image thoroughly some complex informations can be extrapolated, like it is displayed in the image above (click to enlarge!)

Is a paranormal effect thinkable, that clandestines usual objects as paranormal anomaly?
Maybe the strong believe of getting actual messages from a deceased father could imply such a thing?
And does such an hypothetical ability maybe in later states create “real” anomalies like the monk-image?

The history of “Psychic Photography” counts to the most compelling in the area of parapsychology because an factual interaction seemed to have taken place, when we regard the Ted-Serious, the Masuaki Kiyota or the Scole Experiments-Cases.

At the moment I do not dare to present any of the presented photos as evidentially paranormal, although I am persuaded that something peculiar is taking place.

I hope this case motivates discussion and I am looking forward to ideas and proposals from the readers.