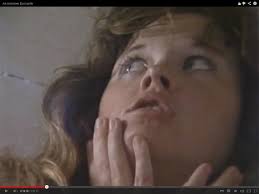 For a very long time a modern day Poltergeist-disturbance case caught my attention and I collected and studied intensively every information i could get, specifically all the visual material available. But not only the fact, that a camera-team around main investigator Dr.Barry Taff was recording a lot of things that usually avoids becoming documented, the obvious emotional impact and angst, the palpable fear terrorizing the main victim of the San Pedro Poltergeist case (1989-1993), single mother of a toddler Jackie Fernandez (in her thirties), gave the case an extra amount of tragic credibility from the start. Taff by the way considered Jackie to be the ‘Poltergeist agent’ and discarded the implications possibly pointing to an outside source of maybe ethereal nature.

Jackie and others (neighbors, child care takers) had strange apparitions in the house. Jackie saw frequently an evil looking male, with a deformed face full of scars, sitting on the bed of her son or approaching her quickly and bawling at her to leave the house before disappearing instantaneously, olfactory sensations of bad smells, regularly documented (photos) appearances of independently moving spherical bright light dots, like projected with a laser pointer onto the walls and ceilings, up to the size of a coin and terrifying noises and knockings from the easily approachable attic.
If you should be interested in these cases of ‘hazardous hauntings’ (Taff), necessarily refer to Barry Conrads (involved News reporter) and his camera mans most actual video production about the case, well told and using all the recorded materials that could be achieved at that time (watch below).

But before you enjoy this really special program, let us come to the todays point, causing me to represent the San Pedro haunting here, even though the case itself is quite well-known.
There was one special fact about this case that was deeply mystifying the involved research- and documenting parties, when the turmoil was reaching its climax:
Suddenly the house started to emanate a mysterious liquid substance. It soaked from the inbetweens of the wooden planks the house was made of and dripped from every structural space within its built, like inlaying cupboards and alike.

Irritated alone by the involved physics behind ongoings like that, the inexplicable sky-rocketed for the researchers, when Taff was getting the results of the analysis of the liquid: human blood plasma!
Blood Plasma is a complicated component of human blood and is either existing within the human body (needs to be centrifuged and then stored frozen to avoid its dissolution) or in Laboratory.
The anomalous appearance of huge quantities of it, extruded from the inner house structure did objectively prove, something very weird was going on in Jackie Hernandez home.

Up to now there is not a handful of documented RSPK-cases (recurrent spontaneous psychokinesis) known where blood played an unanswered role somehow, like in another case, the ‘Bleeding house’.

I digged out San Pedro for you after having stumbled about this. It may not have to do anything with the metaphysics of the San Pedro- or Fountain Drive-haunting, but considering the only eye-witnesses account, there could be a sort of similarity thinkable.
It comes from the Ghost-theory site and Xavier Ortega writes about an email he had received from a police officer:

‘The following story was sent to my from somebody who works for the
Los Angeles Police Department. I was only allowed to post it here if I
omitted certain names.

“In the early 1990’s, I was a young police officer with the LAPD
working North Hollywood Division.  We received a radio call, in a small
but nice apartment complex.  An elderly man called his apartment manager
because his apartment was bleeding.  My partner & I met the manager
outside, who seemed truly bewildered. I entered the apartment and met
the elderly gentleman, seated with considerable blood on the carpet and
some on the walls, leading into an adjacent room.  It looked like a
crime scene and I treated it as such.

A large splotch had a unique bubbling effect that drew my
attention, but other than that, it looked many many other scenes I’ve
seen, consistent with movement of a bleeding person in panic.
Long story short, I called in additional units, a supervisor and an
an ambulance.  We searched complex, streets and alleyway.  We searched
the second story (floor above) and small crawlspace under the apartment
and could find nothing. Not a drop of blood beyond the interior of the
apartment.  We interviewed everybody around, no one heard or saw
anything and they were all believable.
The elderly man said he was seated in the same chair I found him in
when I entered the apartment and inexplicably the walls and carpet just
began bleeding before his eyes.  I had the LAFD check him completely
and he was not bleeding.  I evaluated him for a “5150 H&S” mental
hold, and we had no cause to take him into custody.
The manager said the elderly man called him and gave him the same
strange story he gave me.
The manager did his own investigation,
looking around and
found nothing.
He got a bottle of Hydrogen Peroxide and poured it on
the red substance which immediately began to bubble.  To the manager,
that meant blood, he called us and that explained the one anomaly I
observed.
The supervisor was old sergeant, who called the Watch Commander out
of my ability to hear.  He broke down the scene and sent us back out to
handle radio calls.
A paper trail of this will still exist, we do a Daily Field
Activities Report for every shift, the Sergeant does a Daily Log and the
Watch Commander also does a daily report.  I can’t remember the date,
exact location.  I always wished I had a different Sergeant respond that
would given me the ability for stay longer, take samples or have
detectives respond.
I’m still on the LAPD, never seen anything else like it.  I don’t
believe in the supernatural but when I heard about the Atlanta House, it
sparked my memory.  The LAPD has changed exponentially since this
incident and no Sergeant or Watch Commander would break down a possible
assault scene without further investigation.  I would not want my
Department to be looked upon for not doing enough, even back then.
Truly, we had a lot of cops trying to figure this out at that moment,
I guess the supervisor thought it a hoax and maybe he was right.  I
objected, he ordered the clearing of the scene and that was that.  The
Sergeant and Watch Commander Logs may have further information.  He was
under no obligation to inform me of what the Watch Commander said and
offered no rationale for clearing the scene.
My mind is open if you have further insight.  What do you know know about inexplicable bleeding dwellings?”

And finally in feature film-length, Barry Conrads intensive documentary about the Poltergeist related ordeal of a young woman 1989.

Anecdotal post scriptum:
Freely associating let me share a last interesting anecdote. The German researcher Fanny Moser called Poltergeist cases ‘a human mystery’, underlining the hundreds of years of research with no results.
There is another mystery on this earth momentarily expanding its aspects of mysteriousness quite unproportionally. Actually it is an ongoing crime committed in different countries, like the US, Argentina and UK. At least for fifty years, despite the fact dozens of State polices and the FBI have investigated, law enforcement was not able to bring only one suspect in front of a court.
Since the sixties in different countries law enforcement-, live-stock- and health-departements are confronted with inexplicable animal deaths within commercial live-stock, private animal keeping and even with pets and wild animals under most mysterious and terrifying conditions. 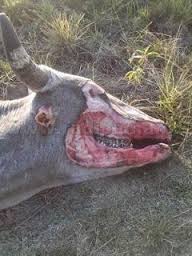 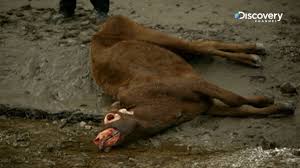 ‘Cattle Mutilation’ is the keyword here and still it is unknown who with clinical accuracy takes re-productive organs, but also tongues, ears, eyes and lips from animals and leaves behind the scary looking mutilated carcasses.
Part of the mystery is the total abcense of blood and the animals broken bones, leading investigators to the conclusion the animals must have been flown out, then mutilated and thrown back onto the pasture from mid-air.
Due to Robert Bigelow NIDS research team in several cases blood plasma was found on the animals, what is exactly as paradox as in the human-related mystery-cases above.

So there are two highly mysterious anomalies happening in the environment of human beings, centuries and decades were not long enough to understand or find answers. Unseen perpetrators here and there. They act around us, but we cannot get a hold on them, but both leave blood plasma!
Whatelse have the both anomalistic complexes maybe in common?