CHANGING COMPLETE SITTING CONDITIONS
After the exciting “Message from Albert Hofmann from beyond” to his long year friend Lucius Werthmueller of the Basler PSI-Verein, our main Guide “Rafi”, that comes through one of our Sitters, carried on to prepare us – meanwhile for months – for a date, when our many years lasting seance-setting should be finally changed in expectation of new and stronger phenomena, provided by the Spirit-Team.

On our way to that particular date the very strong and regularly happening phenomena would slowly cease, we were told by the Groups Guide. The date was chosen to be the first sitting in May, when our Spirit Friends, guide and helpers from the other side, would have finished all the necessary preparation that was needed to start the new agenda.

The teachings of “Rafi” were clear: The table-centered- sitting- arrangement looses to much energy we were told, we should spare and build up our amounts of energy better sitting around a table without touching it throughout the whole sitting, being mainly focussed on its Full-Levitation.

For the reader I want to display at this point the array of interesting phenomena we experienced in the last 3 years – even though the table phenomena were actually the most regularly occurring ones:
a.)Spirit Contact: The group experimented many known ways to learn what brings best results.
So we communicated through the oui-ja boeard, by table-rapped spelled words and through mediumistic efforts through different personalities in the group, mainly of two males, who are still part of the group today. We were contacted by drop in communicators, chatted with deceased relatives, gained informations only they could have known aso. When the energies were very high we received mysterious written Messages, some very evidential.
b.)Powerful Table Phenomena: Communicating tables happened in exciting lively mannerisms. First Full Levitations in the Dark developed later to the most evident and most regular occurring Phenomenon: The completely levitated table, oftentimes for considerable periods of time, that sitters had the opportunity to control and persuade themselves. In the last weeks of the former Sitting Arrangement it was even possible to shine lights under the levitated table and to see it float in Mid-Air. 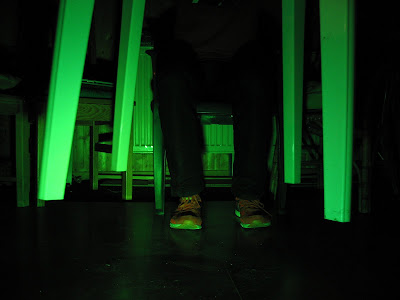 Picture: Under such light conditions Full Levitations were observed at the end of the former-sitting-arrangement-period

c.)Objects materializing inmidst or thrown into the Circle from impossible directions or seem to drop from the Ceiling (apports): many antique objects came with or without explanations, oftentimes when all sitters where controlled, very good examples are the Albert Hofmann-Waxball-Message and the Mercury-Apport. 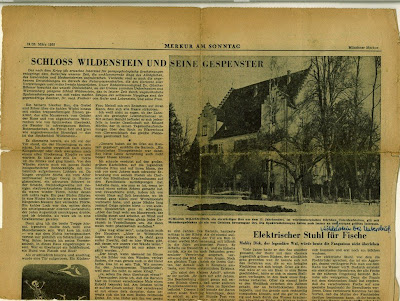 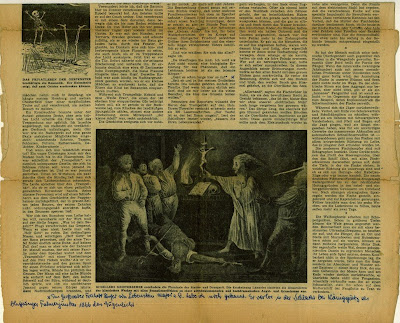 Picture: The MERCURY Apport: After a random chat about a Scole-Apport of a historical newspaper sheet with an article on it referring to the Paranormal, 20 minutes later the 1955 newspaper appeared on the Seance table 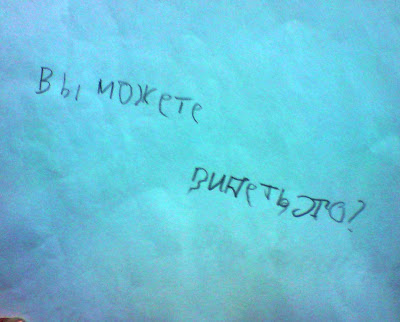 Picture: “Can you see that?” in Cyrillic

e.)Touches:Again and again sitters become unmistakenly touched. Some of them received the touchings in connection with apparent communicators, like for example a special manner of laying the hands on the shoulders by a deceased father, while he is at the same time communicating to the group per oui-ja or raps. Sometimes hands seem to have built under the tables surface and touching the sitters knees.
f.)Lights: Objective light-phenomena (seen by more than one sitter). The most evidential light phenomena were a light moving to marked paper-sheets and producing there a pencil-painting of unknown origin within seconds.
g.)Atmosphere: Very different cognitions of different changes and occurrences inside the Seance room: Drops of Temperature, scents, breezes, propably ectoplasmatic substances were laid on sitters or travelled the room, viewable by blocking luminous-taped objects.

GIVING AND TAKING
In this preparation-era of the last months we were several times specifically been told, that all we had experienced would decline gradually and regain itself in new and stronger forms –
under the newly arranged conditions by the Spirit conductors.

And actually we recognized a decline f.e. of the amount of levitations. In the months before we regularly achieved up to 9 full levitations during a session – not since long we have to “wait” two or three weeks for one.

Moreover we were told, that our Guide Rafi would leave and another personality would take over from the first sitting from May on. Moreover visitors will be excluded for the first 3 to 5 months.

Knowing that, in March an April we had to choose from various requests, who we managed to invite before “everything” would start newly without actually knowing how long it definetly would take to really induce some first results.
One of the reason for the guest-exclusion surely was the fact that our Group was already at the borderline of having too much sitters. Several times we had to exclude sitters for moments, meanwhile the guide was explaining, that f.e. full levitations cannot be achieved because of the much too mixed variety of human energies, unappropriate to use them in an purposefull effort to produce physical phenomena. After the change resp. momentay exclusion of Sitters full levitations were again happening.

UNFINISHED BUSINESS
I want to tell you today mainly about another evidential apport-process, again with a guest involved, this time an alternative medical healer and therapist from Munich. I want to tell that little bit complicated story shortly: From the Power-Aspect we had an average sitting, lively table, scents and shadowy figures recognized moving through the room, Guide Rafi accompanying the ongoings with commentaries. Several times we were requested to hold hands to have them all controlled.

During the third hold-hands-order that evening, we suddenly heard an object falling to the ground outside the sitters Circle.
As fast as possible we naturally stopped the sitting for checking the reason of the noise.
When seconds later white light was flooding the Seance Room the sitters stood astonished in front of an object, they not have seen for the first time …

Eleven months earlier, also having a guest sitter in the seance room, after a trembling of the tables surface also an object was found – laying on the table – we the following weeks thought much about and tried to learn if there was any message transported within it. 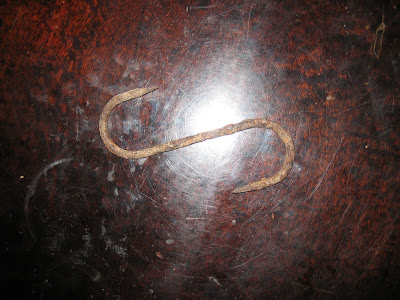 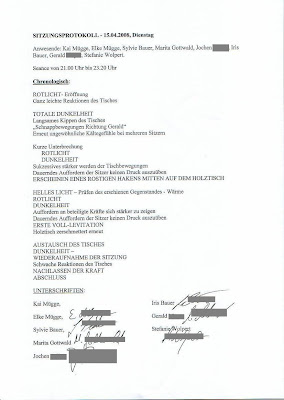 Picture: Protocol of the evening of the first hook-apport. Later the evening a powerful fulll levitation destroyed the heavy seance table

That object was an antique “butchers hook” – very erodet, very rusty. We learned at that time that at least in Germany butchers hooks were manufactured since 1933 in stainless steel. So we were able to define it being an antique one, especially from its look this was easily imaginable.
We weren t provided by any more explanation regarding the object…. – until the sitting in March 2009 with the Munich Guest.

SIGNS OF ETERNITY
Eleven months had gone and we again stood March 2009 in front of an exactly similar hook, only that this one wasn t by no means so much erodet, in the contrary, it looked much younger and better.

Shortly after we were told a highly interesting story.
According the main spirit-personality the first hook that appeared in 2008 was an unsuccessful experiment in regard that already then BOTH hooks should appear.
“Rafi” told that both hooks were planned to appear laying on the table in such a manner that both were building THE SIGN FOR ETERNITY (a laying 8)!
“The clean hook at that time should represent the human world, the rusty hook the world of Spirit! Both hooks positioned in such a manner adversely oponent should show, that BOTH WORLDS ARE INTERCONNECTED!”
But not only this!
“That interconnection not only should show the both worlds affiliation, but, represented by the sign of Eternity symbolise AN OUT OF THESE TWO PARTS BUILT ADDITIONAL DIMENSIONAL REALITY – that one you (we) at last live in!”
“A good analogy are the human eyes. The left eye only sees two-dimensional. The right eye also achieves to see two-dimensional. But A NEW FORM OF DIMENSIONAL EXISTENCE IS ACHIEVED WHEN BOTH EYES INTERCONNECTED REVEAL THE FACT OF AN THREE-DIMENSIONAL REALITY!”
” They function as well alone – the eye, the human world – but aware of these connections a NEW EXPERIENCABLE WORLD unfolds to you (the sitters). You are privileged not only to get a glimpse of it but to dive deep into this new eternal plane of existence!”

This is what the entity told us and for us it worked. If that is the real reason, why two antique butcher hooks appeared, we do not know, but we have to accept the explanation of the spirit-personality and we consider that an attractive finalisation and explanation for the appearing objects. 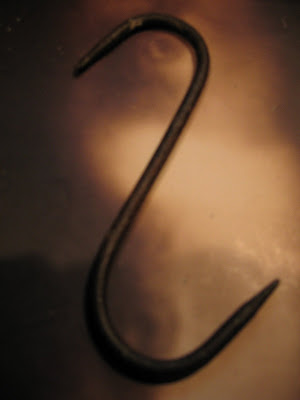 Picture: The 2009 hook, obviously much younger and non-eroded, but with the same parameters than the 2008 hook

Unfortunately is the first received hook still in the Bern/Suisse Museum for Communications, as an example for objective Seance Room Phenomena. Not until July we can finaly bring the hooks together to let them form that powerful symbol – the symbol for eternity!

Be prepared for Part2: “Imperator” is entering the stage