Dr. Michael Mnahm is a parapsychological author about paranormal phenomena in biology
and certain Near-Death-Phenomena. His reports are fully independent. He has no
further private relationship to any FEG Member, even though he is in the
meantime a wanted and appreciated guest to the sittings.

Written between the 20. and the 26.10.2012 on the basis of a personally recorded audio-file of the séance and of notes taken in the hours after the sitting.

This sitting took place at the location of the Basler Psi-Verein in Basel.
In addition to Kai, we were 18 sitters in the usual room on the second floor that is used for séances in Basel. Like during my last sitting in Basel, Kai was only accompanied by one member of his home circle, his wife Julia. She was operating the red light lamp, and opened and closed the cabinet curtain when required on its right side.
Lucius Werthmüller operated the CD player and controlled the door, his partner Sabin sat between him and their son Pablo who operated the fan. Most of the other sitters were Swiss and had already visited one or more séances with Kai or with other mediums.
I arrived at the location at about 5 p.m., and was left alone in the already prepared séance room for as long as I wished. I measured the room and thoroughly searched it (heaters, chairs, cabinet, other objects such as two buckets, bells and shakers, wall pictures and tapestry, the sheathing of the two windows, …) and found nothing suspicious.
At about 6 p.m., Kai gave the introductory talk in the first floor.
Then, he took his usual retreat in a separate room for about half an hour.

During this time, I went into the room again and searched it again, this time with Olivier, one of the guests. This time, Julia was also present. After the search, Olivier left the room again, but Julia stayed there with me until the sitting began.
I also touched Julia’s clothes to see if any (larger) suspicious devices were hidden, but found none. Before the other sitters finally entered the room, the female guest sitters were checked by Sabine and the male guests by Pablo. They also used a metal detector. When Sabine, Pablo and Lucius finally entered the room, Julia touched Sabine’s clothes, I touched Lucius’s and Pablo’s clothes. Again, I couldn’t feel any large, long or clumsy objects that might be used for trickery. We all sat down in an order in which male and female sitters alternating.

Julia showed all objects in the room that might cause suspicion to the sitters, such as two spare batteries for the torch, the recorder, a water bottle, empty bucket with a towel, etc.

In the active zone about 2.5 m in front of the cabinet chair, there was a ring of bells and two shakers which were placed on a second empty bucket that was turned upside down.
Julia also explained the purpose of the taped marker on the floor: During the first phase of the sitting, the part in total darkness, Kai moves out of the cabinet with his chair for each of the different phenomena. This is said to happen because the phenomena seem to work best when Kai sits in a distance of about 1.5 m from the “active zone” and the bucket with the objects. The taped marker is easy to feel with ones feet, and it serves as a marker for Kai in the entranced state that he is not supposed to transgress with his feet when he moves out of the cabinet with his chair in the dark. Moreover, Kai can be much better controlled when he has left the cabinet during the phenomena take place. (This is the main reason! When years ago in the home circle the medium wasn t hold at his arms and legs during some of the phenomena, they happened as well, when Kai was staying inside of the cabinet! The sliding out of the cabinet is because today Kai is controlled and hold during every single darkness phenomenon! The Editor)

When Kai finally entered the room, he for the first time wasn t to be searched, (as he had announced it already in the pre-talk) stating that it had been done so often already and regularly disturbs his pre-trance state. He appeared somewhat disorientated or dissociated already, and went straight to the cabinet. He sat down in his chair (during the sitting, HB complained about that apparent flaw, and insisted that I should search Kai’s clothes after the séance to compensate it at least somewhat).

The order of the sitters was as follows: 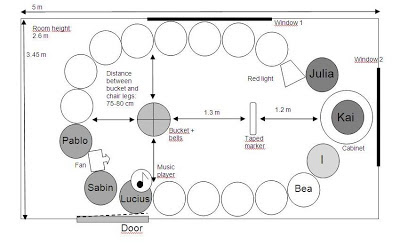 Kai opened the sitting with a short prayer and began his rapid breathing technique in darkness. It took a few minutes until HB first came through. Around that time, first raps were heard at the ceiling of the room and at one of the window sheaths. The raps accompanied HBs introductory words for several minutes, were well audible, consisted mainly of a fast knocking, and moved around predominantly at the ceiling.

During the first part of the sitting, the following phenomena occurred: 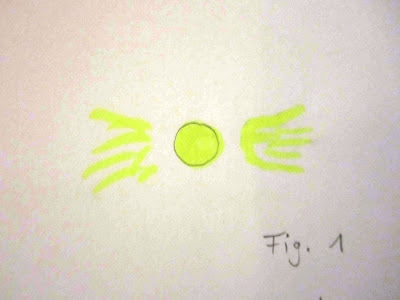 In the following, I’ll describe the mode of the control in more detail.

As mentioned, Kai moves out of the cabinet with his chair during the commencement of each phenomenon, and retreats back into the cabinet when they cease.

Each time Kai has moved out of the cabinet, he was in a position in front of me and to the left of me. To control him, I had to leave my chair and to move next to him, thus breaking the chain with my left neighbour, Bea. Then, I knelt on my right knee, but I kept my lower left leg standing in an upright position, and bent at its knee. On each occasion, Bea touched my left shoulder or my back with her right hand to remain in bodily contact with me.
For controlling Kai’s body, I put my left foot in contact with his left foot. I started at its side, but put my foot also in front of his foot, and even on top of it. I felt his foot very well because I was wearing only socks.
I put my left hand on Kai’s left thigh, and took his left hand in my right hand.

During the phenomena 2-6, I was also asked to control Julia’s hands when the phenomena were in full action. On these occasions, I leaned over Kai’s left thigh across to Julia.
In this position, I was in bodily touch with Kai at the following locations:
• My left foot still touched his left foot.
• My hip and belly region touched his left thigh including his left lower arm which rested on this thigh.
• My right lower arm, stretching across to Julia, touched Kai’s belly.
• My right hand clasped his right hand which was held by Julia’s left hand and rested on Kai’s right thigh.
• My right upper arm and shoulder touched Kai’s left upper arm and shoulder, sometimes Kai leaned a little against me.
• My left hand controlled Julia’s right hand, and again, Kai’s right thigh/knee, on which Julia’s right hand rested.
When I reached across to Julia and Kai’s other side to take both of Julia’s hands, I made sure that I could distinctly touch these three parts: Julia’s two hands, Kai’s right hand, and Kai’s right thigh.
This was easily possible, since I had usually more than half a minute to control Julia and Kai in this way (see below). In addition, Julia wiggled her (small) fingers a little so that I could easily find and distinguish them from Kai’s large hand.
During the bell manipulations, I was even allowed to control Kai and Julia two times during the course of the display, the first time for 40 seconds and the second time for 15 seconds.
HB asked to change the first double-control back into a one-sided control of Kai because the manipulations had difficulties to follow the beat of the music. When they nicely did so, HB asked me to lean over to Julia again to perform the double-control again.

In short, I was in touch with practically all parts of Kai’s body except of his back and head. In addition, during the phenomena including the times that I have controlled Kai (and Julia), HB has frequently spoken and has asked the sitters to describe the ongoing phenomena, and asked Julia and me to describe the activities of the medium.

Sometimes, when HB was speaking, the music was turned off and it was very silent in the room. Still, the phenomena continued under the described control conditions without producing any audible sound, and often, the light and the trumpet performed rather fast movements of one to two meters, sometimes more.
Thus, it seems very unlikely that the phenomena were produced with the help of Kai’s mouth.

During the controls of the last two phenomena, I have also asked the whole group of sitters if they all sit in chain with joined hands, and have received unanimously affirmative feedback.

Unlike a previous sitting in Hanau, when I had already been allowed to control Kai (and Julia), I could not detect a correspondence between the object movements and Kai’s bodily tension this time. Most of the time, he seemed completely relaxed.

After the described phenomena, we had a short beak. Then, it was ectoplasm time. In total, we saw eight of the typical displays in red light, all of which lasted about half a minute. However, they contained nothing essentially new and I will not describe them in more detail here.
Then, the sitting was to be closed and Kai awoke from trance.
Except for Julia and me, all left the darkened séance room and went downstairs.
After a few minutes of recovery, we jointly searched the cabinet with a torch and found no tools that might have been used to produce the object movements. We went downstairs into a separate room, where Kai undressed until he stood in front of me in pants. I searched his clothes and found nothing suspicious.

For me, this degree of bodily control was a very valuable experience. I can state with confidence that neither Kai nor Julia had moved during the mentioned phenomena. At present, I can think of no plausible way how the phenomena could have been produced in a fraudulent way.
It has recently been argued that the circle members in Hanau participate in the production of the phenomena. This possibility can safely be excluded in the present sitting, because only Julia had accompanied Kai and her hands were also controlled by me.
I find it not convincing (and, in fact, quite problematic for a variety of reasons) to argue that some of the guest sitters or the organisers of the sitting (Lucius, Sabin, and Pablo) could have helped Kai and Julia in the fraudulent production of the phenomena.
Also, I find it difficult to imagine how Kai (and/or Julia) might have constructed and abolished a hidden mechanical device to produce the phenomena in question without anybody noticing it.

The fact that Kai and Julia were controlled in the described way, at a foreign location without other circle members being present, and the fact that they were essentially motionlessness during the display of the five major phenomena described, adds considerable weight to the possibility that these phenomena are indeed genuine.

Thanks a lot, Lucius & Co., for organising this impressive event, and most of all, Kai & Julia for their confidence and kindness to let me control both of you. This was an unforgettable evening!