THE RETURNING OF SPIRIT PHANTOMS – Experiments at the Basler Psi-Verein, March 2019 (photos and video)

Home » THE RETURNING OF SPIRIT PHANTOMS – Experiments at the Basler Psi-Verein, March 2019 (photos and video) 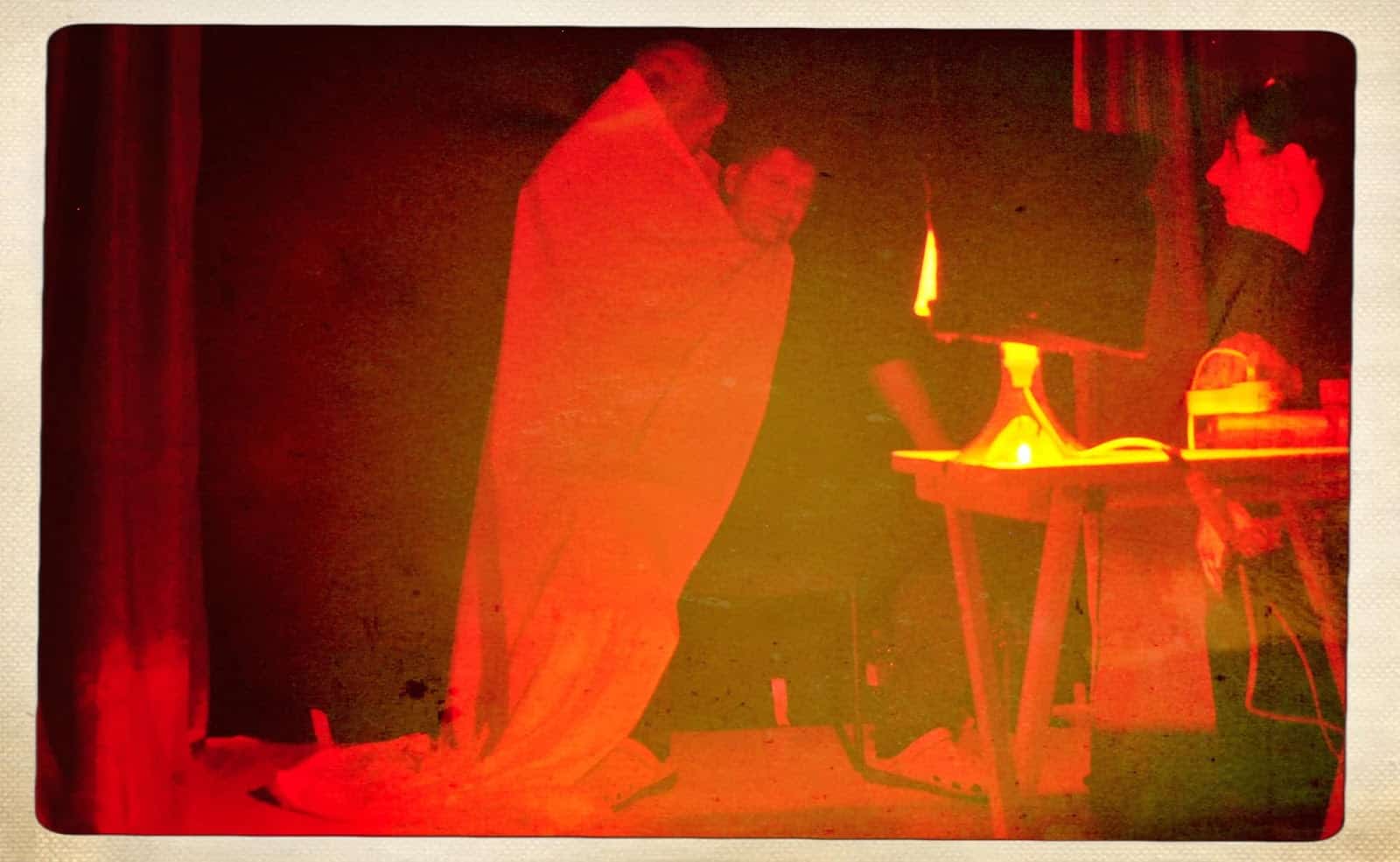 ‘I was fortunate and had in regards to what occurred a best possible and close seat and could see every moment of this unbelievable spectacle. I looked directly at it and into its face while it was growing higher and higher…!’ M.P., male, 44, Online Marketer

‘What an unforgettable and sensational experience, a breakthrough! Absolutely fantastic! Can’t find words to express… – I am so thankful I was part of this…!’ C.K., female, 39, Legal Affairs Assistant

‘It was
breath-taking und has touched me so deeply I was crying when the
Materialization developed. I feel so richly gifted and am so thankful I
was allowed to experience this, I am still floating as if wings were
given to me that evening!’ B.H., female, 43, Judge

‘It has been on
honor for me to be part of this sitters group. I wish more people could
experience this on their own. I mean what in this world could be more
exciting than seeing a friendly entity forming itself out of “nowhere”
so that everyone in the room can watch
it with their own eyes without the need of any special sensory abilities
or any special technical equipment. I call this a mind changer.’
M.K., male, 35, Informatic


‘Very much impressed I was also by the extreme lightning phenomena during the De-Materialization. The clarity of the white-blue light is incredible. And what I realized only later it doesn’t blind. It reminds me of descriptions of the clear light at the end of the tunnel by people who had Near-Death-Experiences. They describe its purity and brightness without blinding either!’ B.H., female, 43, Judge

PUSHING THE BOUNDARIES FURTHER
Thursday, the 14th, was one of those days. 20 experienced sitters entered the especially equipped séance-room on the first floor of the Basler Psi-Verein in Switzerland. For more than 8 years we experiment and hold spirit-ceremonies of the Western Hemisphere, séances, in the spaces of this renowned location.

For decades the Psi-Verein is worldwidely recognized for its engagement in the field of experimental Parapsychology and international events like the Basler PSI days and a monthly programm filling up a three-monthly printed publication thick as a book.
Last year it was celebrating its 50 year birthday, what says all.

The lights became dimmed, the door hermetically closed, two windows double-shielded, the red light flickered and tinched the room into warm red light. The intensive introductory talk about the history of Materialization Phenomena within Spiritualism and beyond was still echoeing in everbodies awareness.

A short affirmation finalized with a loud ‘So be it!’ in unisono signalled the spirits everything was ready to become!

From here on I switch over to the narratives of present sitters and the recording of the séance. My own memory went to sleep a few minutes later. A spirit personality, totally seperated from mine is then taking over for approx. two and a half hours. It is the main communicator ‘Hans’ and he is functioning on its own behalf.

From Sitters reports and the recording:
People were accompanying the powerful chants of the ‘Crystal Shaman’ (Lex v. Someren) and slowly the lights became dimmed down fully. Strange flickering lights appeared soon in front of the cabinet!
It is only seperating the room with cloth on its front and on one side, the other two sides of the cabinet are made of concrete wall. The medium is heard breathing all the time.

Then ‘Hans’ comes through and talks about the tonight efforts to bring in a personality we know of since the very first sittings of the Felix Circle, the Gatekeeper ‘Ptah’.

WATCHING THE MYSTERY UNFOLDING
A strange transparent handball-sized whitish mass illuminated by flickering lights inside very shortly showed up two or three times on head height in front of the cabinet opening during the very first words of ‘Hans’, the main communicator.

After the greetings he talks about the setting of the evening and asks the sitters if they are willing to support the planned visit of ‘Gonpo Yeshi’, called ‘Po’, the blind tibetian monk, who is the human form of the Gatekeeper Ptah, energetically!
The crowd of sitters cheers and applauds.
‘Hans’ then describes shortly the history of ‘Ptah in the Felix Circle’, meanwhile the sitters see through tiny openings massive blue lightning going on inside of the cabinet. The blueish light is well known for the ‘spirit-portals’ building or opening…!

After another chant Julia opens in the dark both curtain sides, gets back to her place and hears the knocking signalling ‘lights on’.

‘LIGHTS ON!’
‘In the very first second I saw the white material bulge’, Julia remembers, ‘and a head appeared from below!’
Here the photographing set in and began depicting the phantoms building process in mainly 7 pictures. Smoothly the entity rose and grew up from short height, on chest level of the medium, up to above mediums head looking down to it.

Something intensive was then going on. Not that the process wasn’t incredible enough anyway, a following moment for the spectators was like frozen in time when in a great stillness the phantom seemed to look down and inspect – full of interest and affection – its medium with a palpable intensity.
The camera was luckily able to capture this moment in time (many thanks to photographer Lucius Werthmueller) in all its glory (see the image below).
Some had the impression there was a kind of telepathical communication in these intense seconds because even the entranced medium had a blissful expression on its face. But asked the medium responded having no memory at all. 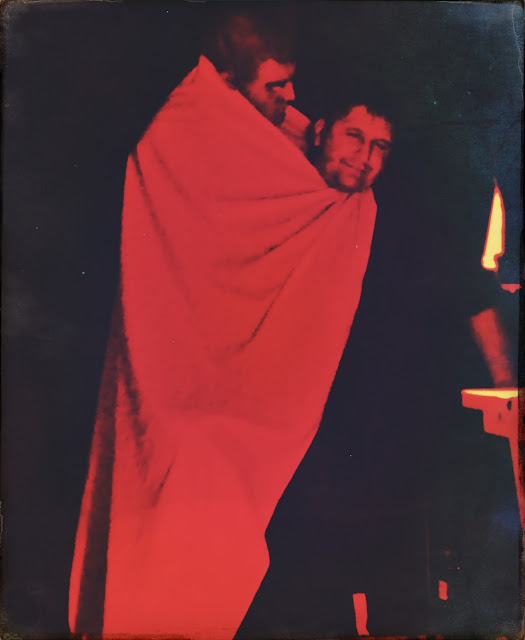 The white material depicted here, like in previous experiments, is a historical artefact in regards to spirit materialization and is used like a robe for the entities. Originally called ‘spirit cloth’ in the Western Hemispheres ceremonies, it was believed to be the burials shroud at first but was later understood to be an ectoplasmic fabric of some sort. Ectoplasm appeared as fabric countless of times in the history of Spiritualism and made its understanding not necessarily easier. But it is what it is.

The 40 WATTS of red light were fully turned up positioned 2,5 – 3 feet away from the phantom fully illuminated by it. Two enduring exposures to the observation of the sitters were realised at this stage of its presence and everybody watched the development and behaviour of the phantom in awe.

When the light was switched off then the phantom began to speak with considerable difficulty.
After two sentences the main control re-routed the Monks voice over to the mediums speech-apparatus.

And meanwhile the monk spoke through the medium another exposure stage was starting to happen.
This time the monk showed up in the cabinet opening wearing a white headdress …

‘AN UNIVERSAL BATTLE IS THE HERITAGE OF THE HUMAN SPECIES AND WILL DECIDE OVER ITS SURVIVAL…!’
‘Over the last decades our voices have turned into sirens!’, Hans said often in the past.
‘We have to join forces on the battlefield – to overcome the threats plagueing our realms. Side by side we will stand in the battle of light against darkness!’, Po said through Hans.
Over the last years in this mediumship the message of the spirit entities included a recruitement of light-workers via the famous ‘Activation Stones’. Magical artefacts reminding and activating our true nature and potentials becoming conscious hubs in a defense-network interconnecting us back into the great Oneness. 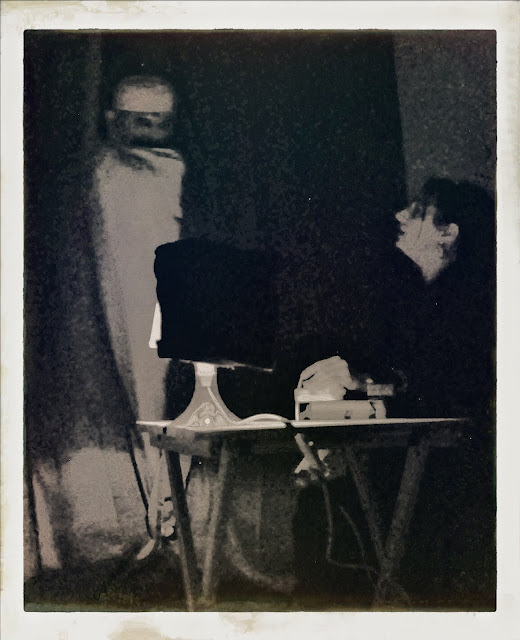 ‘Your species problems are mirroring the universal conflict you’ve been part of since the beginning of time!’
‘But
will you believe me also when I tell you there are powerful entities at your side, helping the human being to survive?’

‘Love you’re born from is one of the highest frequencies activating soul matter and creating the potential to move mountains and to turn down the Forces of Darkness.’
‘So I have returned to tell you your time’s still coming!’, the monk said in his first appearance.
And that he will return …! 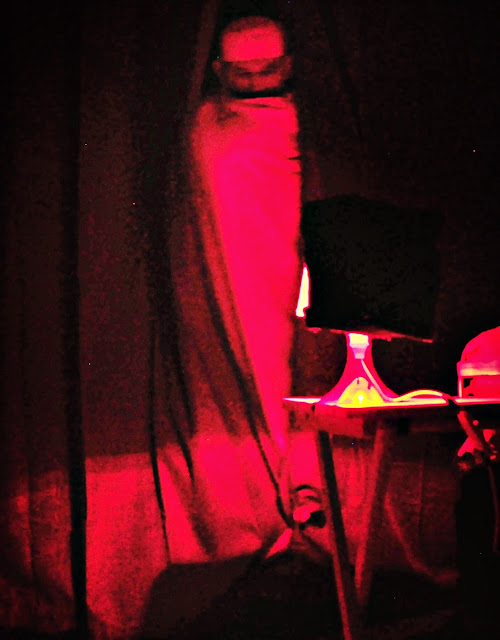 ‘Po’ spoke to the sitters in broken english and when standing in the cabinet entrance he showed extreme oriental facial features. For some it seems as if these features have intensified somehow since the first photos were taken. The present sitters though underline it was definitely one and the same entity, but with headdress…!

Others suggest the extraterrestrial nature is blending over and start showing up in this last exposure sequence.

We cannot really clear that up.
The entities presence transported powerful palpable moments and delivered a message of hope and universal love!

Then ‘Po’ disappeared behind the curtains and only shortly later ‘Hans’ asked for their re-opening to show sequences of ‘the dematerialization-process’. This time the sitters did neither see entity nor medium, but a massive man-height sized bulge of white material and a silent blue lightning storm inside of it, probably transporting the entity back to the spirit realms.

For the Sitters it was a sensational and magical evening and we say thank you to the infinite spirit-worlds, the Basler Psi-Verein and the Sitters that support the mediumistical development into the outer realms of Spirituality…