It is one of the main demonstration features of the FEG Spirit Team during Cabinet Seances: After the medium has produced a large mass of veil like substance from his mouth onto the floor, within seconds out of the etherically foggy substance a hand compacts and begins to erect itself from the floor to wave to the Sitters.
The deep trance process’ main spirit control “Hans Bender” alleges it is his hand.
He claims he holds the hand of his spirit- or etherical body at the same time into a certain device like place within the communication area he is communicating from, does the movement there and at the very same moment the transferred ectoplasmic substance does build his hand here in our realm visible for all present! 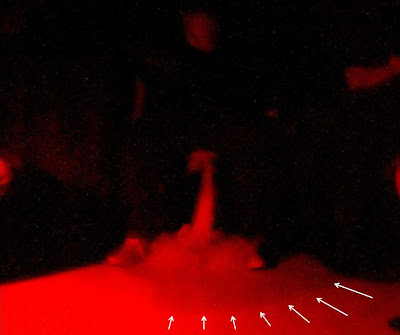 Picture: One more photo showing another incident of that kind, taken just a few weeks ago at the Basle PSI Association. Watch the foggy mass stream all around the foot area of the medium. Out of it
“Hans Benders” hand has erected. Following are then obvious waving motions of the large white hand, which is neither in the short film clip, nor in this photo very well visible 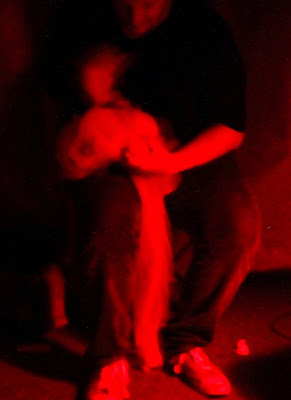 Picture: Sometimes the outflowing ectoplasm is collected on the mediums lap. In these two photos the measures and form of the hand is better visible, meanwhile the movement of the hand is again captured in two stages. In this photo the waving motion starts with the hand on the left side… 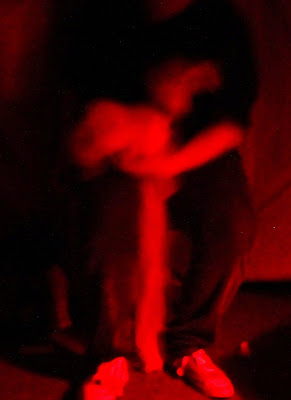 Picture: In this second photo the waving motion is captured showing the ectoplasmic hand bent to the right…