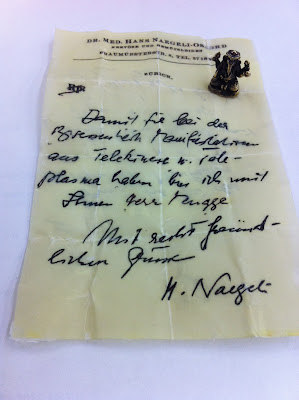 Picture: The personalized recipe of Prof. Naegeli and his message to the medium. The miniature statue of the indian god Ganesh additionally fell from the sky 1 hour before Seance started, when Circle Leader and Medium were sitting on the balkony of the BPV.

Already early in the FEG`s work partly highly persuasive Apport-Phenomena have taken place. Even though some may regard this class of classical paranormal event as suspicious – suddenly appearing small objects, easy to smuggle into the Seance room – the case with many FEG Apports is another:

From the beginning the Apport Phenomena of the Felix Circle contained mainly “Super-Knowledge” or “Survival Evidence”. Many times both! And many times so striking, that a fraud could never explain all aspects of the event!

Another clou of the apports were handwritings and signatures of deceased personalities, oftentimes adding to language-related typicals, idioms or outdated grammar!

Another mystery is that these handwritten messages are without exception arriving in balls of wax, allegedly to secure them against certain conditions of the paranormal “transport”.

I want to quickly name here three of those events:

Mercury Apport: An antiquarian Newspaper appeared 10 minutes after Circle Leader and Cardiologist Dr. Jochen Soederling, in a spontanous pre-seance-talk about the Scole Group and their phenomena – referred to their Newspaper-apport. Then, minutes later, a 50 years old Newpaper appeared with the same discussed characteristics like the Scole Apport, namely with an article about paranormal phenomena.

Einer Nielsen Apport: Danish Author and well known medium Marion Dampier Jeans receives a message from famous Danish Medium Einer Nielsen. Not only that the message in fact contained the handwriting of Einer Nielsen (expert advice: Poul Blak, Denmark), written in a Danish grammar from the 50ies when the medium lived, the message was additionally referring to ongoings in Marions Physical Circles, no-one present was aware of!

Copernicus apport: Former Scole Sitter Karin and Walter Schnittger receive a wax ball apport with antique objects refering to Nikolaus Kopernikus, whose trails they had travelled 3 months earlier during the summer, after Kopernikus had tried to “come through” Karin Schnittger during her mediumistic activities. 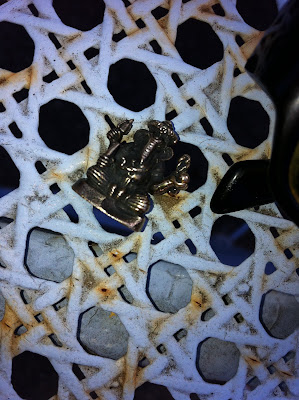 Picture: Apport-Phenomena are a common occurrence in the environment of messengers of the FEG-Spirit Team. This miniature fell from the sky inmidst a talk between Medium and Circle Leader 1 hour before Seance started…

These events at least for the present leave no room for doubt regarding the paranormal origin of the events.

When this week after the summer break, at the 10th of August, the FEG-Spirit Team was holding its first Demonstration Seance at the Basle PSI Association, the sitters like always were told, that the Apport Phenomenon by now only has happened in the Home- and Development-Circle of the Medium.

The more it was surprising that during the Seance a new wax-ball apport was achieved! 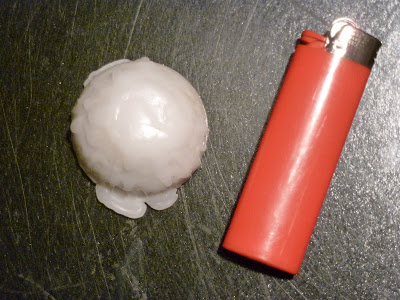 Picture: The Wax-“Ball” in the state of its arrival, a lighter besides it to show the size. These waxballs have multiple arrived in FEG Seances, mostly containing strong survival evidence…

After the Seance many of the Sitters, among them long term friend Dr. Hans Schaer, the BPV-Team around Lucius & Sabin Werthmueller-Suetterlin, the FEG-Trance Medium and Circle Leader Dr. Soederling, were carefully opening the waxball.

In it was an old yellowed personalized Psychiatrists recipe found (see photos), with a handwritten message obviously adressing the medium.

The Psychiatrist is “Hans Naegeli-Osjord”, died 1997, and is allegedly one of the 5 “Chemists”, working in the background of the main communicator “Hans Bender”!

Both men had a connected history – were working together in some fields.

During several meditations especially done to identify the Spirit Team behind Main Communicator “Bender”, “Hans Naegeli” was persistently named as a part of them. 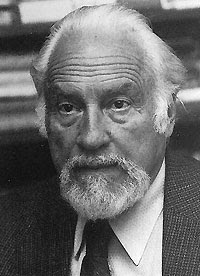 Picture: Prof. Hans Naegeli-Osjord, former chairman of the Switzerland Psychiatrists association and freethinking pioneer implementing spiritual healing methods succesfully into his treatments. All Forms of Possession were his specialties.

Long term chairman of the Switzerland-Psychiatrists-Association “Hans Naegeli Osjord” was a pioneer in finding new approaches and treatments to several widely spread psychiatric syndroms. With a vitalistic and nature-philosophic approach he treated and cured many patients with the classical methods of Magnetic-, Prana- or Spiritual Healing.

And now – with the Apport – it actually seemed as if “Hans Naegeli” was personally outing himself as being in fact a part of the Spirit Team.

When you regard the presented photos, please be aware, that personalized recipes are for every Physician highly sensible objects!

He has under all circumstances to avoid, that his recipes can be misused by third parties! That`s why it is highly unlikely, that anybody but Naegeli himself was possessing this kind of paper.

Additionally we strongly expect the handwriting as being his own! 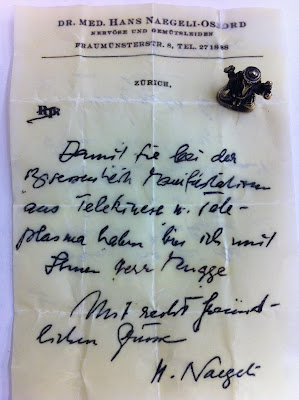 This will be examined by involved Parapsychologists the upcoming days, who own original handwritings of “Naegeli”.

We have no doubts, that it will be Naegeli`s Handwriting and we will announce it with waving flags, when we have received the confirmation.

The text on the recipe says:

“That you achieve Manifestations of Telekinesis and Teleplasm during your states of obsession, I am with you Mr. Mugge. With very kind regards H.Naegeli”

Assumed that this is Hans Naegeli`s original handwriting, he seems to clearly identify himself as actually being a part of the FEG Spirit Team and responsible (besides others) for the strong manifestations of the FEG-Group and of the FEG-Medium!

The unprobability to obtain a personalized recipe of him and the fact, that no handwritings of Naegeli are anywhere publicly available, we count this apport to the most strangest, but also most persuasive we ever had so far.

And even if Naegeli`s handwriting was available in the internet for example (it isn`t!) – the written message is so personal, that this text never could have been used in another context as this one: A message of the deceased Prof. Naegeli to the FEG-Group, resp. to the Medium himself!