The Association of Psychological Studies and Progress, Buenos Aires, Argentinia, was officially launched on 1 January 1900. The founding group has been running since 1888 – around a medium of Spanish Origin, Doña Francisca Lozano Latorraca (known as “Sister Paca). 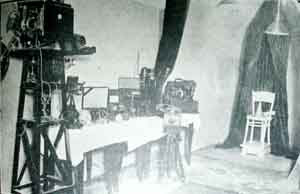 All in all in thes laboratory the founders were able to witness the production of different phenomena: Materialization of plants (flowers), minerals (stones, shells, small objects) and animals, including the alleged materialization of various live birds in cages securely sealed. 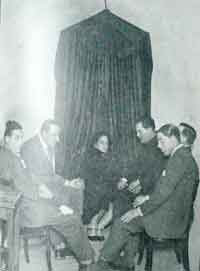 Picture: With the medium “Sister Paca” the first ectoplasmic formations were photographed in Argentinia: On the knee of the sitter front left the ectoplasmic production is positioned. The sitters were claiming the creation was resembling a hand!

In addition levitating tables, chairs and mediums were witnessed, paraffin experiments were done, direct music and voices were heard and the effects of “contacts” between mediums and spirit on the ectoplasm, showing faces with different characteristics. 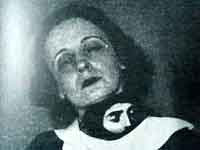 Picture: Details of a partial face-materialization. Taken during experimental session on Christmas eve 1934 in the Laboratory. The photograph was obtained by magnesium flash. (Source: Spiritualism , 13, No. 152-153, January-February 1937, p. 7).
The Laboratories main history in ectoplasmic materialization, which included human faces, animals, etc. (Marino, 1963) and many other indefinable ectoplasmic productions were achieved by Doña Francisca Lozano Latorraca (known as “Sister Paca).
She constituted the first photographic “evidence” of ectoplasmics obtained in Buenos Aires by Argentine mediums. 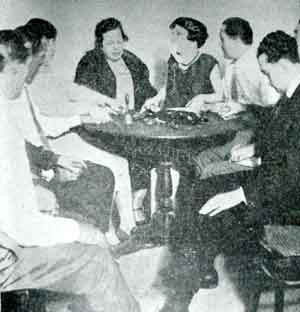 Picture: Doña Francisca Lozano Latorraca is extruding ectoplasm in an experimental session with a second medium called “A. Montenegro” 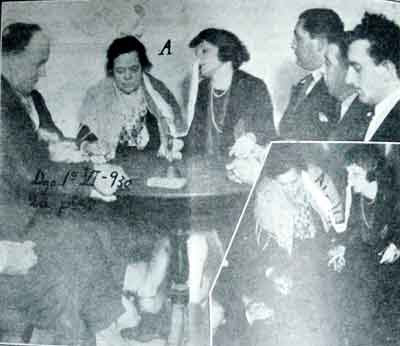 Picture: In this stereo image the ectoplasmic structure seems to connect the both mediums. Such strange ectoplasmic behaviour is widely spread in ectoplasmic mediumship in South America, especially in Brazil, where the “interconnecting” ectoplasm can be watched on many photos! (please visit the articles about Ectoplasmic Mediumship on felixcircle.blogspot.com here and here)
Later the medium A. Montenegro was producing creations with characteristics very similar to the phenomena produced by other mediums in Europe, whose images are well known.
Enjoy!