‘Angels in
the trenches’ is historian, sociologist and Paranormal Reviews Editor Leo
Ruickbies newest achievement after his 2016 well acclaimed ‘The impossible Zoo’.
‘Angels in
the trenches’ is definitely different from what any average reader of a book about
the later European heydays of Spiritualism might expect. Ruickbie refuses to
regurgitate any already previously presented simple landmark-facts of the
spiritualism-movement like we all have read about enough before, like about the
famous mediums and séances, the Dialectical Society, Crookes
with Home and Cooke, the SPR, Richets ‘ectoplasm’, Conan Doyle and Houdini…
No,
Ruickbies standards and requirements lay clearly beyond the well-known and already
exhaustively discussed.
What he is
presenting in his new work is not less than a particular dissection of the continents
recent past, facilitated with the hand of a master surgeon, namely of the WWI
years and its societal sensitivities – mainly but not only of the British – and
how these did interrelate and interfere with the most influential spiritual
movement ever having occurred in Western Society: Modern Spiritualism!
Therefore
Ruickbie digs deep and presents to the reader with an insight and overview only
the diligent historian has contemporary historical materials from different
publications and correspondences rendering the change in society’s perception
from the age of enlightenment into a state of willingly accepting or even
purposefully seeking for the supernatural. 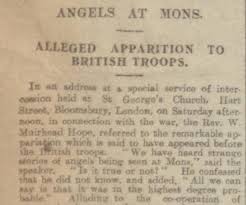 At the time
maybe not even worth a short remark in the news-section, informations among
many, in retrospective indeed the very moments that impacted the collective
unconscious sustainably and enduringly, uniquely presented in this collection
of relatively short episodes.
The books chapters are short, sometimes changing with the next page and so sending the
reader onto a specifically determined curvaceous ride into the past.
It is
Ruickbies psycho-analysis scrutinizing how step by step Western
Spirituality started – suffering under the terror of WWI and experiencing
personal loss of loved ones into the millions – to circle more or less solely
around the question of and proof for Survival – and not let’s say rather ‘classically‘ exploring the
path to epiphany and enlightenment.
Angels in
the Trenches is hence a thorough, dense and intensive, oftentimes surprising read,
revealing many never before interrelated facts underlying an important younger
section in the metaphysical evolution of mankind and its western perspective.
They today restrict western spirituality by evaluating its efforts exclusively if addressing the quest for the proof of
survival. Conditions that many do believe deserve a critical review ….
The book is therefore a clear recommendation!