‘PERMANENT PARANORMAL OBJECTS OF MINE’ (Video: Episode of ‘Kai’s Musings’) 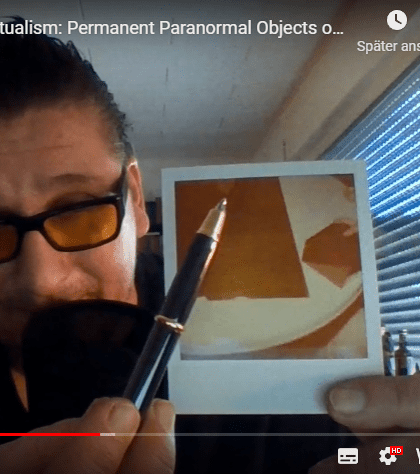 From time to time the Felix Circle and Organizer Kalia Mind Expansion produces visual materials, because a lot of what they do simply has interesting visual characteristics to look at. That refers as well to what Kai will be presenting in new episodes like the following…
Today Kai talks about a specially initializing episode of the dynamics occurring in the Felix Circle.
It is about what the trance-communicator ‘Imperator’ many years ago was demanding of the group to develop or achieve ‘Psychic Photography’ and the interesting results coming from it. While telling the story the onlooker will hear many insightful anecdotes from the early days of the Felix Circle around the year 2007, approx. 4 years after its founding…
What nobody was knowing at the time was the fact that ‘Imperator’ and his plans became the gateway to the ‘spirit team’, ‘the Alchemists’, who were like testing the group with this photo-work to validate if capable to move further with them. Ending did the episode because no more films were available to purchase for the Polaroid Camera originating from the 70ies actually.

Please
watch in Full Screen (cause of failing of the commonly used camera
parts could be filmed only in a 720 resolution, blended photos are
high-res…!)