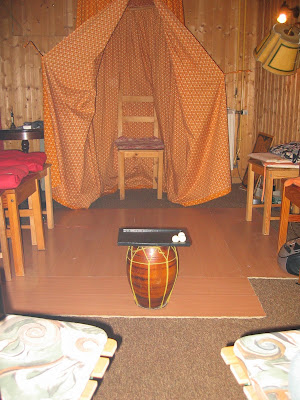 0845-09.10: Lucius Werthmueller of the Basle PSI Association searches the medium and the séance room thoroughly. After he did the body visitation of the medium it takes its seat inside of the cabinet and stays there under the observation of Lucius until start of the seance.

Other Sitters are entering the room and guided to their places by Hermann Haushahn (Jenseitswelten.info).Then last Instructions and Prayer. 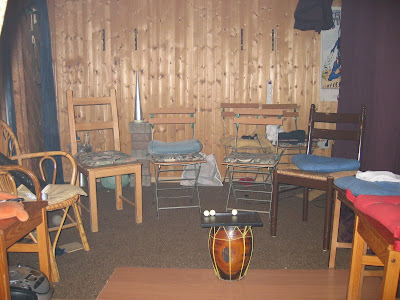 Picture: See what the medium sees. View out of the cabinet!

09.23 pm: Spirit Control “Prof Hans Bender” is welcoming the FEG and the Sitters from the Basle PSI Association with Medium Bea Ruebli and then directly transmitting appreciating comments regarding their work to the benefit of mankind.

Hans Bender declares that most of the upcoming phenomena, especially the ectoplasmic forms, are compactions of the mediums thoughts and inner images. And because the medium is fascinated and inspired by mediumisms heyday of the turn of the century, the ectoplasmic experiments and productions are very likely to those classic experiments of Schrenck-Notzing with Rudi Schneider, Willi Schneider, Marthe Beraud and many others.

Controlled are these materialized contents through the agency of “Hans Bender” and five so called afterlife-chemists that are responsible i.e. for the both forms of ectoplasm, the amorphous operating in 6.25 feet distance from the cabinet and the “rigid” form presented directly at the body of the medium. An “ideoplastic materialization séance” he is calling what is upcoming.

09.35 pm: Sitters start to sing and chat with beautiful Music in the background (from Beatles over “Nights in White Satin” to “A whiter Shade of Pale”)

INSECT LIKE SPIRIT LIGHT
09.40 pm – 0944 pm: Meanwhile “Hans Bender” (in the following “HB”) declares the power field to be built up takes another 5 minutes to go, the sitters have discovered a pale illuminated area at the ceiling. More and more sitters see it and then a large excitement arouses, because a light can be seen by all travelling the whole experimentation area of approx. 14 feet, vanishing and reappearing frequently. Its color is white and it is moving like an insect. Then it moves closer and closer to some sitters that their faces become visible by the shining of the small light. Over minutes the sitters are cheering and applauding spontaneously very excited. Sitters moreover declare, that the light is accompanied by a palpable cold breeze or area! 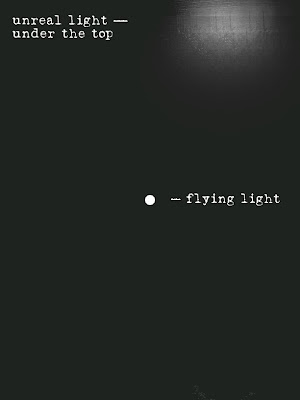 Picture: Technician Alex R. draws the pale illuminated area at the ceiling and the light, travelling the room like an insect

CLEAR AND LOUD WINDCHIME REACTION OVER APPROX 1,5 MIN: 0945 – 0947 pm:
Shortly after HB was announcing the completion of the “power field” the windchime at the ceiling inmidst of the room approx. 6-7 feet away from the cabinet starts ringing permanently.

The searched medium is localizable by a loud gasping sound he makes with every single in-breathe.

HB calls out, the power field is installed!

0947 pm: Circle Leader is requested by HB to take the windchime from the ceiling and so he does.
RESPONSIVE RAPS: 0950 pm: Single Sitters are requested to enter their hands into the “force field” (“hold your closed fist into the middle of the room!”) and to click their fingers – one time, two times, and so forth – and from the ceiling, exactly above the sitter whose fingers are clicking different sounding according knocks respond, sounding as if a hand would knock or pat at the wooden ceiling.

The very well known Switzerland medium Bea Ruebli describes how spirit hands emerge out of the“powerfield” (formed at the ceiling like an umbrella) to exercise the knocking noises!

0952-0956: Sitters are requested to speak with silent music in the background. This is accompanied by PERMANENT DIFFERENT KNOCKING AND SWISHING SOUNDS wandering around at the walls and the ceiling. Still the knocks also do respond instantaneously when they are called to come over or e.g. are requested to do a melody.

0957 pm: The first TOUCHES occur on different sitters, sitting on the left, on the right side of the room and at the farer end of the experimentation area. Legs and arms are mainly touched. Sitters describe the touches as tender and soft.

0958 pm: HB declares the density of a first ectoplasmic rod (“pseudopodia” sic) will now be increased so that it becomes visible for the human eye.
The circle leader places the illu-plaque onto the small mini conga (see photos) and lays a handkerchief above it. Additionally to the illuminating plaque the handkerchief also has many illuminating stripes taped onto it.

Everybody sits in the first row so to speak and has a perfect view onto the focus-objects. Medium is localizable with every single in-breathe gasp. Sitters are requested to chat and remind their legs to withdraw under the chair, because directly in front of them the ectoplasm is building up now.

10.04 pm: First sitter sees something operating at the plaque. HANDKERCHIEF IS PULLED FROM THE PLAQUE and the Circle Leader (in the following CL) is requested to bring it back onto the plaque. The light conditions of the plaque are very good and everybody has a clear view on what is happening.

Important: These hand forms never come from the direction of the cabinet, but always in a right angle to it. It seems to develop in the small space between sitters feet and Focus Object Area! 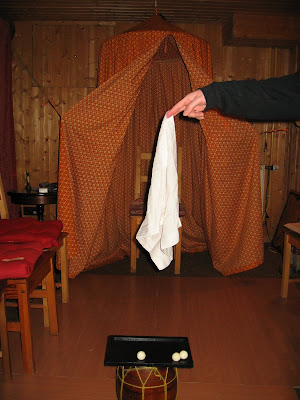 Picture: Three times the handkerchief is pulled out of the CLs hand and floats freely through the room

For all sitters well visible the HANDKERCHIEF IS FIRST TOUCHED BY SOMETHING and is then seemingly OVERTAKEN BY THE ECTOPLASMIC PSEUDOPODIA! CL announces: I have let the handkerchief go – AND THE HANDKERCHIEF FLOATS THROUGH THE ROOM until a sudden drop to the ground! This is exercised three times!

10.12 pm: CL prepares three illuminated Ping Pong Balls (see picture) within the Focus-Object-Area. Like with the handkerchief this experiment is done to see the ectoplasmic forms operating with several objects to gain additional impressions to the nature of these peculiar pseudo-hand-forms! 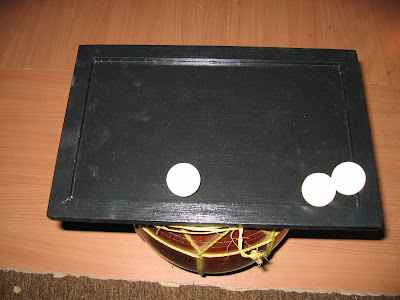 10.16 pm: A LARGE HAND WITH THIS TIME 4 FINGERS IS SEEN TAKING ONE OF THE BALLS! Then the hand is taking the second and the third ball also! Now the sitters see TWO HANDS OPERATING FROM BOTH SIDES OF THE WOODEN SURFACE (in a right angle to the cabinet, 6-7 feet away from it), whereupon the balls are positioned. Finally the handforms throw the balls from the surface.

10.20 pm: HB requests the illuminated plaque to be prepared to let the structures built for a last time freely displayed in front of it – this time without entangling them in any action with Focus Objects, but to simply observe them, when they were showing. 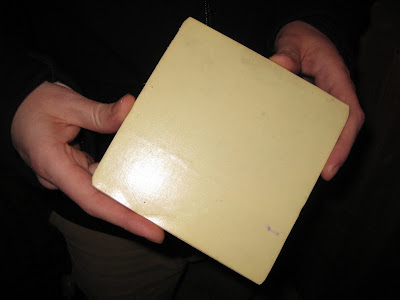 Picture: In front of this plaque the structures showed themselfs undisturbed

10.25 pm: A THREEDIMENSIONAL HAND APPEARS above the plaque – some see 4 some 5 fingers

10.26 pm: Lucius Werthmueller announces that the hand now seemingly is operating at his shoes. Medium Bea Ruebli confirms to see the etherical hands in action. Dr. Soederling declares, that the hand was building not until the moment it came resting on the plaque – before it only was an undefined amorphous structure! The sitters observe how a fifth finger additionally is forming.

10.27 pm: The drum and plaque seem to move together and THEN A BABY HAND BECOMES VISIBLE and several seconds ALL WITNESSES DISCUSS ITS FEATURES

10.28 pm: HB declares that they want to follow the mediums wish to do photographs of the rigid compaction of that amorphous hand that was already showing above the plaque – but now in a higher density possible to photograph! Out of this reason there is no energy to apport any objects today – as it was requested by Iris.

10.29 pm: HB wants the CL to prepare the trumpet – to illuminate the phosphorescent ring around it a last time with white light. For that reason he urges the sitters to ensure that the cabinet is tightly closed.

10.34 pm: TRUMPET STARTS FLOATING and begins WITH A JUMP INTO THE ROOM ITS FLIGHT

10.35 pm: All the sitters are highly excited THE TRUMPET TAVELS THROUGH THE ROOM – touches several sitters softly, communicating with some, does movements associated with giggling. Then it rests on Elke shoulder and touches softly every sitter in the row.

10.36 pm: After a downfall it begins to rise again and dances in the air – all are highly excited.

10.38 pm: HB requests to take the trumpet out of the focus area.

10.39 pm: HB requests to Dr. Soederling to instruct the sitters regarding the unisono spoken countdown, during which ectoplasm in its rigid form is shown at the mediums body

10.44 pm: Sitters discuss the safety measures regarding the avoidance of the flash! HB requests chatter and music

FIRST EXPOSURE: After heavy vomiting sounds HB – now in control over the complete nervous system of the medium – opens the cabinet curtains and exposes a medium sitting slightly bent forward. Out of his mouth comes something like a white tube of cotton wool, and with his hands it is pulling the tube out of his mouth (see photo) 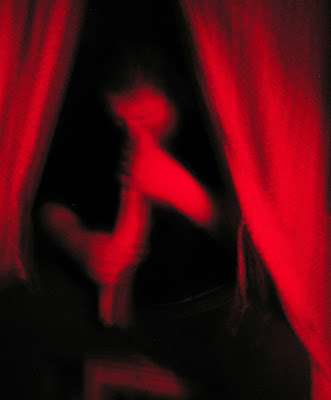 Photo: Medium pulls a tube of whitish substance out of his mouth 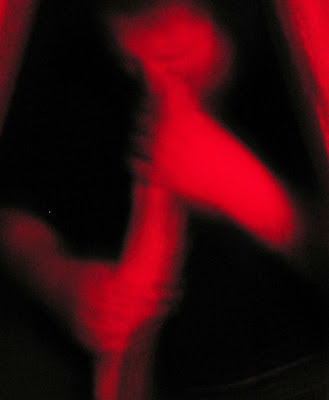 Picture: Enlargement of the former photo 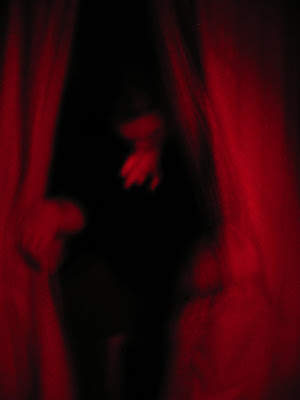 Picture: Second exposure. The substance seems to glow faintly by itself 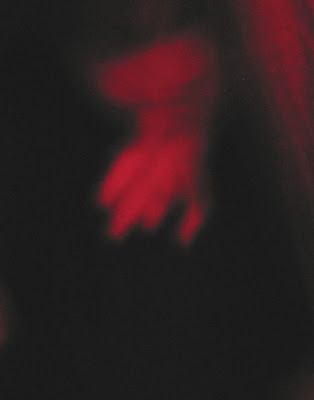 15 seconds later
10.58 pm: THIRD EXPOSURE – out of mediums mouth a large mass of a whitish substance is parting on breast-height in several protrusions, two forming out two more flat, like cut-outs- looking, hands. One of them lays on his upper right leg, the other seems to hold the right curtain half to the side.
The Third Photo is failing to provide a glimpse between the curtain gaps. But what we can see is the ectoplasmic hand above the mediums hand (the lower hand is transparent because during exposure time the medium had moved his hand). 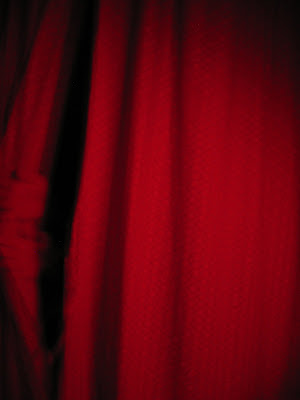 Picture: Failing to glimpse into the gap this photo of the third exposure only shows one ectoplasmic hand (the above hand) pushing the curtain to the side

11.05 pm: Sitters are guided outside the room, only CL and Hermann rest with the medium.

We await incoming reports soon!
Until then!

May LOVE be with you ALL!

Kai/FEG
Here is the beginning of my post. And here is the rest of it.