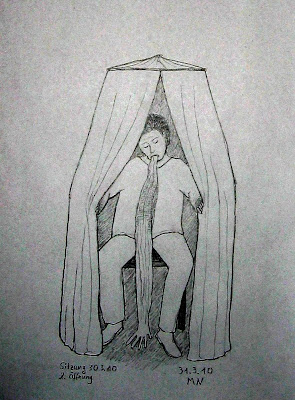 Picture: After the morphing ectoplasm was multiply shown in front of an illuminated wooden plaque, where it was exercising different actions (for example trying to grab an handkerchief) and displaying a permanent variety of different forms and structures, the chemists-team from beyond was allowing three different stages of “ectoplasmic ideoplasticity through the agency of spiritual entities” to be shown to the sitters group!
Picture shows stage 2

At a powerful Seance for Materialisation and several other Phenomena the Felix Groups Circle Leader Dr. Jochen Soederling (Pseudonym) had invited high ranked academical colleagues to witness:
So there were besides Dr Soederling (37),
– Dr. MNahm, Author and Biologist (40),
– Prof. Stephen Braude, (University of Maryland, Head of Dep. of Philosophy), Author, Chairman and Editor in Chief (Journal of the Society for Scientific Exploration) of several scientific organisations
– Prof. Peter Mulacz, (University of Vienna), Author, Chairman of several scientific Organisations and last but not least
– Dr. J. Boedding (pseudonym) (45) (Stuttgart/Germany), who wants for well known reasons at the moment to stay anonymous.

Sitting Order of the 12 Sitters (4 guests plus the Felix Group of which 1 Sitter serves as the medium in the Cabinet) was a U-Form in front of Cabinet.
Considering the sitters limbs only a narrow path was left, approx 4 feet (1.25 m) broad and 12 feet (3,50 m) long in which all phenomena were taking place directly in front of the sitters feets and legs, but the knocks at the ceiling and the activation of the windchime at the ceiling.
Focus Objects Wind Chime and photoluminiscent plaque (laying on a 40cm high mini-conga-drum) were positioned in 2 m distance from cabinet

After the room, the Medium was searched by Dr. MNahm and was from then on sitting on his cabinet stool, staying observed until the seance began.
15 minutes trance induction.
Then Greetings by the trance entity “Prof. Hans Bender”. [by the author of the report referred to as “HB”; the editor]Prof. Peter Mulacz was working with Hans Bender in his late years, so he welcomed him especially.

(my 5th sitting with the circle):

I have searched the medium and his clothes on the body prior to the sitting. There were only clothes on his body, nothing suspicious. I have searched the séanceroom together with the medium and removed a few longer items such as three wooden boards and one wooden batten. I could not find other long objects that could be used to manipulate phenomena in the séance room.

After the “energetic field” was built up, the windchimes jingled several times gently. This time, I heard no clicking sounds as if it had been hit with a stick.

Clicking sounds at the cheiling in response to finger clicks by Peter and me, repeating the number of finger clicks. Other rapping phenomena: Raps moving across the ceiling, sometimes quite rapidly. Moving e. g. from above Jochen to above me, but also to the sitters of the back of the room. These raps sounded similar to raps produced with fingers or knuckles. Sometimes, they appeared to follow the rhythm of the music of the CD player, but not as distinctly as in the last sitting I was present when the raps clearly joined our singing. There were also about three thumps of different quality: Much louder than the usual raps, and giving the impression like being produced by hitting a wooden stick against the ceiling. One time, I also heard wiping sounds above my head (for ~ 20 sec.), like somebody would sweep on the ceiling with a hand or a cloth. HB stated that for a particular reason (not specified) the raps could only produced at the ceiling, not on the floor.

During the plaque phenomena, several sitters heard a sound like something fell to the floor (a wax ball???) [ref. to an apport phenomenon of past seances; the editor] between the drum and the cabinet, but nothing could be found.

HB [“Hans Bender”, the spirit control; the editor] requested to put the handkerchief on the plaque. Several times, all could see hand-like shapes that moved the handkerchief, sometimes pushing or drawing it from the plaque on the drum (see pics). The hand-like varied in regard to form, size, finger-to-palm proportion, number of digits, etc. Sometimes, only a dark mass was seen moving above the plaque. It seemed obvious that theses shapes were able to move the handkerchief, sometimes the fingers seemed to perform slight movements like bending. At one time, I saw a whitish shape next to the plaque for an instant when at the same time, finger shapes were moving above the
plaque. The shape appeared in direction of the cabinet, but not on a direct line between drum and the cabinet (see pic). It seemed dimly lit by the phosphorescent plaque. Thus, one might suspect that the dark shapes seen above the plaque are not of black colour. Nevertheless, this fleeting observation might also have been a subjective impression of illusory nature. For putting the handkerchief back onto the plaque/drum, Jochen switched the red light on on several occasions. The curtain of the cabinet was always closed and the drapery appeared unchanged between the subsequent rearrangements of
the handkerchief. The plaque also turned around its axis, it seemed as if the
drum remained fixed. At another occasion, however, the entire drum moved a bit on the floor and I heard
respective scratchy sounds. Shortly after, it moved directly towards my feet and legs and touched them.

5) Vibrations
About three times I felt the floor very gently vibrate or tremble directly below my feet.
These vibrations seemed to be followed by plaque phenomena. But I am not sure about
the exact origin of these vibrations. Perhaps, they were caused by other feet moving or
the bass frequences of the CD player. Maybe this is interesting stuff to follow up. 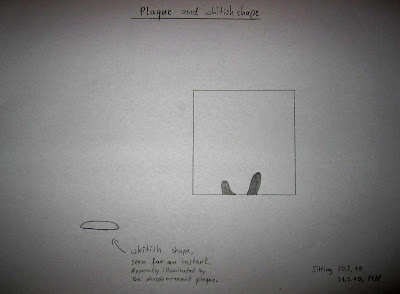 I was once touched distinctly on the front part of my left lower leg.

The trumpet moved slightly and fell over on one occasion. Later, we were asked to
hold hands and to press them. The trumpet rose and flew for perhaps 3 minutes
(check with recording), flying in all directions and shifting its orientation
in the room. It also passed the sitters at the rear of the room, at a distance
of about 3.5 m from the cabinet. It came very close to the sitters, sometimes
touching them. I was once touched on my right hand, once on my knees/thighs. It
also touched the ceiling with an audible noise two or three times. It lowered
itself towards the drum after about two minutes (?), we all thought that the
flight was over. Then, it moved around the drum on floor level and rose up
again. On about three occasions, the trumpet displayed circle-like movements,
the outlined circle measuring about 0.5 m in diameter. The flight ended with an
audible drop from a low level of perhaps 0.5 m, approximately at the position
of the start of the flight. The medium breathed audible in the cabinet during
the trumpet flight. The flight itself was not accompanied by audible noises
originating from the trumpet itself, it seemed entirely silent.

The medium made a lot of groaning and gargling sounds. Red light was switched
on from counts 5-1 in sequences counting from 15 to 0. We counted about 4-5 sequences. The last 3 times the cabinet
opened and a whitish mass on the body of the medium was clearly visible. (1)
The first time a white substance seemed to hang out of the medium’s mouth,
ending in a hand-like shape that lay on the chest of the medium. (2) The second
time this substance seemed considerable elongated. It reached down to the
floor, the hand lying flat on the floor (see pic). In the region of the
medium’s chest, it was my impression that the white substance apperead like
drapes of like a fine woven cloth, comparable to pictures of Einer Nielson or
Stanislawa P.

Pictures: The following 3 pictures show the ectoplasm developing during 3 exposed stages. In the third stage, the mass not only seemed to have parted from mediums mouth, but was observed by some of the sitters obviously moving on the shoulder and seeming to develop into a large “something” that was standing behind the medium. 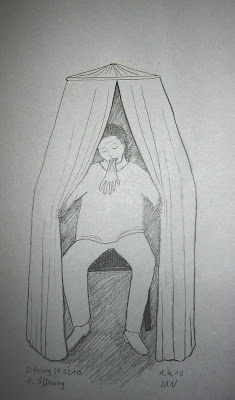 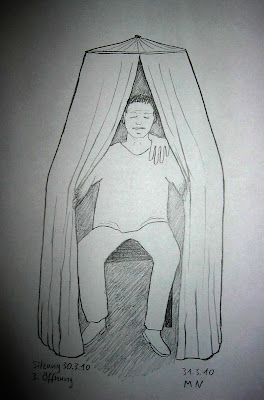 (3) The last time the hand rested on the medium’s left shoulder (see pic). To some sitters, it appeared larger than before. Retrospectively,this might well have been, but this difference did not strike me at that time.The connection to the medium’s mouth was not existent. But a rest of whitish mass seemed to be behind the hand extending towards the nape of the medium.

After the curtain closed, the medium awoke from the trance and we ended the
séance.

9) Sensations of coolness:
On several occasions, I had the impression of coldness on my lower legs between my
shoes and the lower end of the trousers. Still, these sensations were rather weak and they
might well be attributed to the normal temperature gradient between bottom and
ceiling of the room. They might even be subjectiveillusions. Sometimes, I also felt more
distinct sensations of coldness on my naked forearms. These can be reporduced by
stronger than normal exhalations, and I am inclined to attribute them to the air current
caused by the breath of neighbouring sitters.

Although not impossible, I consider it very difficult to fake the phenomena observed without anybody noticing it. The medium was mostly heard talking or breathing inside the cabinet during the major phenomena.

In particular, phenomena difficult to fake are the raps and their movements across the ceiling, the large variety of hand-like shapes which sometimes appeared to move digits and entered the plaque not from the direction of the cabinet; and the noiseless trumpet flight.

In my opinion, somebody must leave his or her chair without anybody noticing it to produce these phenomena fraudulently. This I consider difficult under the given circumstances. Perhaps, the slight vibrations of the ground below my feet would also be difficult to fake. But clearly, it is too early to come up with hypotheses regarding this vibes and their origin.

For the future, it would be of importance that all sitters don’t tap their feet on the ground. And I recommend placing the CD player on a blanket or cloth to avoid direct contact with the floor, thus avoiding transference of sound waves to the floor. Regarding the raps, I would also recommend to record control raps or wiping sounds with different material, produced inside the séance room and in the room above it. Raps of good sound quality could be analysed by Barrie Colvin. And again, I recommend using a creaking chair for the medium, if possible also for the sitters next to the medium.

Continuous holding of hands (like the last time) would also diminish to
possibility of fraud, as nobody could leave his or her chair or use free hands
without at least one more person knowing of it. Changing the sitting order of
members and guests once or twice (as performed once in the present séance)
during the sitting might also increase the difficulty to secretly leave the
chair for a potential trickster among the sitters. Moreover, it would also be
of interest to install a continuously recording thermometer on the floor of the
room. But filming the séance with a zero-lux camera would be the optimal
solution to document any of the large-scale phenomena.

However. To conclude with my personal estimation: It is my general impression that the observed large-scale phenomena were genuine and that the circle members are trustworthy persons.
Dr. M.N., Freiburg 1. April 2010