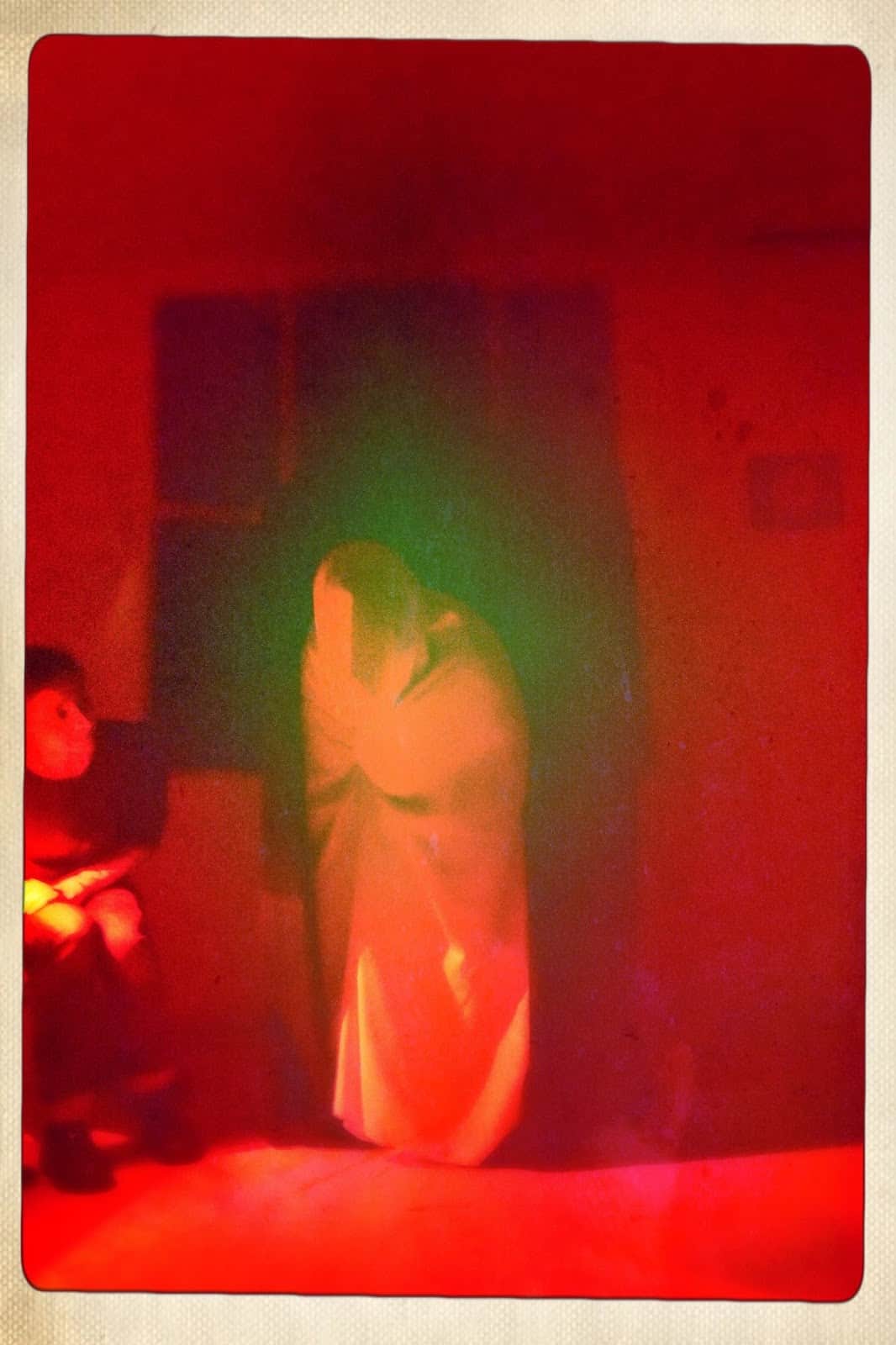 (This report contains the observations and comments of different sitters, who were present and gave their accounts afterwards.)

ALL IMAGES NO USE WITHOUT PERMISSION

‘WE WOULD LIKE TO PUSH THE BOUNDARIES…’
It is Thursday, the 12th of May 2016, at the BPV, Basle, Switzerland.
The Spirit Team of the Felix Circle holds a séance for advanced sitters, with K.M. in the cabinet as serving vessel, resp. medium of the evening.
What will be emerging that day will for all present sitters become a séance to remember.

After a long and exhaustive sounding trance induction – via the mediums breathing technique that sounds a bit like hyperventilating – eventually the spirit teams ‘main operator for séance room conversation, Hans B.’, starts reluctantly to speak through the medium.
And right from the start, like over the rest of the evening, his words are accompanied by tiny little flashing dots of light flickering in dozens in and around the cabinet and where the curtain halfs do meet.

The operator speaks about the crossroads the human kind has arrived at, divided between spiritual awakening and materialistic seduction. About the value of the human being in the ballance of interdimensional dynamics. It speaks about the tendency of complex intelligent systems to develop towards even more complex forms achieving finally a transformation into structurally or dimensionally higher organized forms. It speaks about the value of metaphysical interest and activity, pushing us always to broaden our theoretical constructs about reality towards what is hidden before our eyes. It speaks about activating and interconnecting interest- and experimentation-groups worldwidely and about the outlook for a consciousness shift coming from that interlinked system – finally inspiring the ‘race born from love‘ to find the wits to survive. ‘That is what it’s about: The Survival of the Human kind!’, he claims. ‘That is the eternal and only true purpose to communicate from the spirit world to yours!’

Then he refers to the practical aspects of the evenings séance room experimentation and to the previous and partially succesful attempts to achieve fully materialized spirit forms in different stages of completion in red light.

‘We would like to push the boundaries further today with you, if you are willing to participate with your energies…!’
A room full of guests signals full support.

CONDENSING MATTER
At that time something bewildering is starting to happen, totally new and unexpected for everybody in the room: First slightly and then with an alarming amplitude the whole séance-room starts to shake and shiver.
The event host, BPV’s president, award-winning author and investigator of the paranormal, Lucius Werthmueller (57), even adresses the séance lead Julia Muegge considering to evacuate the room or at least pause the séance to find out what is responsible for this unsettling shaking of everything.
Noone could provide any idea or understand what was going on: ‘First I thought, somebody was on the roof, but when the perceiveable rumbling turned more into an earthquake-like shaking, I really was worrying about the safety of our guests here in the house, until…, yes until the spirit communicator interrupted the speculations and explained the situation!’, President Werthmueller explains.

‘Do not be afraid!’
‘It is us!’
‘We are condensing matter within the room!’
‘That is for the upcoming processes necessary tonight. So calm down again – that is solely responsible for the shakings in the walls and the floor and the guts!’

Unfortunately the trembling is so persistent and intensive that a couple of sitter’s excitement only hardly can supress some sort of sea-sickness coming up.
In the end though nobody needs to leave the room and all affected subjects somehow achieve to succesfully defend this nausea caused by the strange trembling of the room.

The tremblings and shakings last around a short hour and until the spirit operator announces the beginning of the main experiment of the evening. Then the shaking slowly disappears.

8 WEEKS AGO
Approx. 8 weeks before, the experiment had a predecessor, when a spirit form was building up behind the medium and waved to the sitters.
Today, the operator makes clear, they want to go a step further.
Extremely weak sounding the usually strong spirit operator gives last verbal instructions.

The tension in the room is palpable, nobody knows what might occur, but everybody is aware of the spirit team rarely disappoints…
The red light is once more altered to a level séance-room photography might be makeable – as long as there is something worthwhile to picture – and the photographer sits ready frontal to the cabinet, that is closed in the meantime!

With a thud something seems to have landed – or is it the signal to switch on the light? Julia decides to follow what the operator had told her before and switches the red light on.

The sitters look stunned towards the cabinet. The professional camera starts to click and immediate exclamations of excitement by the sitters start to swell.

VISIBLE FULL FORM MATERIALIZATION
In front of the cabinet, slightly inmidst of the opening of the curtains a comparably huge subject makes its appearance. It is wrapped totally into a white garment with a huge hood. It obviously is alive and exercises movements for all to see. It turns and looks around.
The form suddenly starts to bow three times in all directions towards the sitters and the excitement increases.
Then it turns to Julia and their both heads nearly touch each other (see photo 1). Julia is talking calmly to the hooded figure and can hear from her place the medium back in its chair breathing heavily, meanwhile the phantom once more looks straight into the room (photo 2), when the mediums body gives the signal to switch the red light off.

Loud applause fills the room and doesn’t want to end. People cheer and cry in excitement. The spirit operator is again audible and he introduces the Felix
Circles Spirit Helper Aleister Crowley as the one having materialized in
full form in front of the cabinet.

Some still go pale, when they hear this
name. They have never really informed themselves about this outstanding man and scholar of eastern secret teachings seeking for contact with higher forms of cosmic consciousness, resp. higher organized entities within the accessable areas of astral journeys a.s.f.. For the scholars of Western and Eastern forms of magical practices Mr. Crowley
was the most influential figure of the the 20th century.
We will deepen that on other occasions.

In the meantime the medium gives newly the signal for red light and for another exposure of the scene around the cabinet: This time the garment has sunken in, only the ectoplasmic mantle still streaming from the mediums mouth (photos 3-6). An enormous voluminous mass lies in front of the cabinet still connected to the medium. It moves out of the back of the cabinet and holds the curtains purposefully apart to have everybody take a good look onto it. After a short period of darkness, only a few seconds, the whole mass is suddenly gone. Completely.
A second ago everything was covered by it and suddenly it is gone – with no place to put it either inside or outside the clothed cabinet. Everything is visible inside of the cabinet now again widely opened by the medium.
So a few minutes after the presence of the materialization everything is gone again. Sitters express loudly their gratefulness towards the spirit control closing the session of the evening from its seat in the open cabinet.

Other very unique and stunning things were going on in the darkness of the séance room with very finely materialized female spirit hands interacting with sitters. And in regards to ‘séance-room materialization’ every participant is sensing it has taken part in a history making moment.

And so even days later many still feel like ‘in trance’ or ‘hyperactive’ or ‘have problems to find back’ into their everyday’s rhythms and patterns, so much they were shaken by the presence of the materialized spirit form, as it occurred the 12th of May 2016 at the BPV, Basle, Switzerland.

All who we were there have participated and enabled something enormous. A room full of like-minded people, mediums and experimenters, all together writing history – about contemporary séance-room experimentation and Full Form Materialization!