The Felix Circle has started to do experiments in Psychic Photography, conducted by the deceased icon of German Parapsychology “Prof. Hans Bender”.

With the end of 2008 one of our trance-personalities, “Rafael Gutmann” announced to change place with a higher levelled personality. The mentioned entity first came only through under very unnerving circumstances. The trance induction had changed and was accompanied by heavy hyperventilating and the entrancing 10 minutes were very exhausting for all present. Later the entity explained that energy assimilation was the problem. Moreover the replacing entity did not want to reveal its name and to work under a pseudonym at the beginning. At this time it only could speak in a very difficult, but interesting manner.
It sounded like a radio, that looses its signal, the pitch of the voice seemed to increase and decrease in a way, while it was permanently changing its audiobility. During this its say levelled between faster speakings in a higher pitched voice with changes into a slower very deep gruntling voice that was nearly unaudible. Very interesting to observe that.

Rafael had already told us that behind the flamboyant pseudonym “Imperator” was diguising an influential German Scientist, that wanted to work with us, but not to reveal his identity, unless it was clear, that a transferring of information through the entranced sitter, the medium, was makeable.
Later we learned, that “Imperator” choosed this name, because some of his scholars called him so unofficially.

“Imperator” changed a lot in our whole process of sitting we had applied for over nearly 4 years.
He urged us to discuss certain spiritual issues and inspired a whole new set of meditation and visualisations for the whole group. Moreover he wanted us to reflect on the possibilities of ITC, psychic photography its possiblities and boundaries.

Especially he introduced to us a planetary energy that shall be used by spirit helpers, and instructed us in meditations to communicate with that energy. At the same time we implied many of Robin Foys and the Scole-Entities’ advises and somehow the trance contents seemed to interact and somehow replenish with these.

Then, what many already were expecting “Imperator” identified himself as the deceased german icon of parapsychology “Prof. Hans Bender”. He was it who brought our change in modus operandi in fact in connection with the ITC-issue. Besides he was giving us many datails out of his life, he mentioned names, year dates, things he had done and things he ignored during his earth-time. He also told us of experiments he was once part of in the ninetees
regarding his passion-issue: ITC respectively EVP he was once very involved with, working with Friedrich Jürgenson, Klaus Schreiber, Ernst Senkovsky, V. Delavre and many others.

Hans Bender (1907-1991) was in fact part of ITC-experiments from both “sides”, means he was involved in the nineties so far, that he was an answering entity from beyond, when German and Luxembourgian researchers were contacted by him. During these transcommunications he called himself “Spook-Bender” like he did communicating through our entranced sitter.

Bender instructed our group finally approximately 6 weeks ago – around the beginning June – now to begin to try first experiments. We were urged to organize the no-more-produced polaroid 600 model and sufficient films. After informing about and some expensive Euros later we had several polaroid-cameras out of different production years and fabric-new films.
After this was achieved and we sat ready to snap we recognized that the preparation process seemed to take longer than expected – now a mirror was requested – large enough to focus onto it and in a way positioned to have an sufficient visible area, that reflects the area above the seance table.
That area was many times in the months before mentioned as the area where new phenomena should appear!

So again a week passed and so we sat Tuesday, the 21th of July with nearly the complete group, 9 out of 11 sitters, and were awaiting if “Hans Bender” this time wanted to process what he seemed to have planned.
After the sitting-contents of the first 90 minutes until the break at 10 p.m., Hans Bender came through quickly and well ballanced for the medium, now perfectly assimilated.
He greated those back from holiday, he thanked the others who organized the needed objects and announced that after an enquiry at “the Chemists” – a word resp. a group of spirit-helpers he mentioned for the first time – he was instructed to inform us, that one photo is possible today to be taken, unless his following instructions were absolutely thoroughly followed:
We were instructed to:
– choose one sitter besides the circle leader and the awoken medium, so that three are involved
– prepare absolute total darkness, if any light touched the outside transported photo the “Chemists” work is destroyed
– place the mirror on the Seance-Table, resp. in a position where it reflects the area above the table.
– have the awoken medium-sitter open the polaroid-camera, that a green light illuminates the whole photographing
process
– position the chosen sitter besides the photographer ready to take directly the snapped photo and to
immediately put it into the wooden box to overhand it to the Circle Leader Dr. P.J., who not until the end of the
seance around 11 p.m. is allowed to let loose of the box and to open it to look if the experiment was susccesful!

So after these instructions “Hans Bender” withdrawed and the medium awoke.
We were eager to see if it was really possible to get some results.
We lit the lights to organize everything what was requested, switched off the lights again and began to talk freely, knowing, that the moment the sitter opens the camera (the Polaroid 600 has to be swung open to be able to snap) and the green light appears on it, seconds later the photo will be taken.

And so it went! Although the photographer forgot to close the swung open part after the photo was transported outside and taken by the one with the box, we achieved a first exciting result, especially if we compare it with the two control photos we shot soon after the discovery. 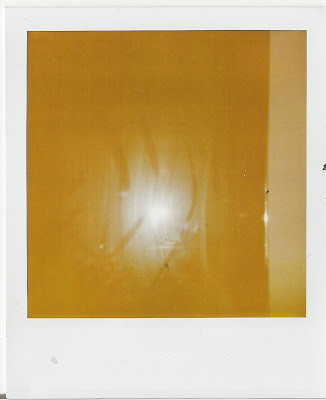 That is one of the control photo we took, showing what is to be seen under non-experimental conditions and without the involvement of Hans Bender and his chemists. The reason why the center of the focus is positioned too far to the left hand side is the fact, that the lens of the polaroid is positioned besides the “searcher”. Everytime you snap near obejcts you are a bit too far left! The white area beside the mirror is the white Seance table. 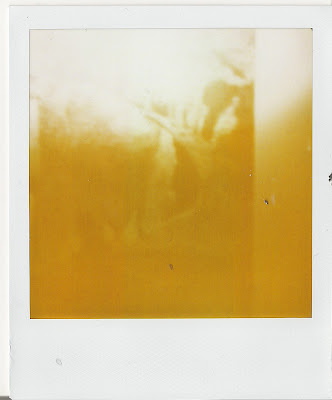 The “one” picture that was produced under the aide of the chemists and conducted by Hans Bender. Again you can see the edge of the mirror and the white Seance table behind. The position of the camera was more diagonal, thats why the flash-reflection is a bit more upwards. Besides the peculiar image that has developed it is interesting, that nearly all reflecting-attributes showing in the control photos aren t visible. 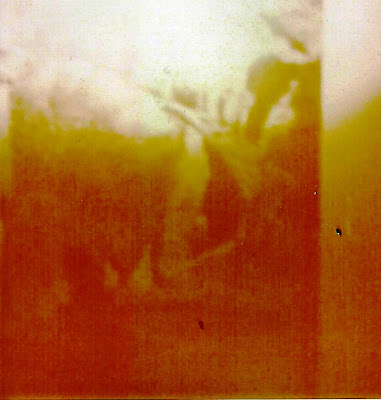 Cut out and enhancements – but we can not definetly state what it is though. Absolutely sure is, that it is no reflection of anything in the room. We sit in a completely wooden paneled room, and a reflection would have shown maybe the diagonal wooden ceiling panels but nothing else.

The moment the picture was taken two sitters had interesting visual sensations. One of them saw a grey whirly sea out of an unknown substance directly above the mirror, while the other sitter saw for several seconds, demonstratetively long, an old mans face with grey hair and a thin and long nose – probably Hans Bender – although she never had seen him before.
Both women usually only very, very seldom see anything in the darkened room and never things, that aren t objectively there…!

What the picture shows is a mystery but in our eyes definetly a tendency towards results of other groups and experimenters in psychic photography.
Maybe it shows an underwater-scene, or a cave scene – some see faces, others not. Is it originally a work of art what the image presents or a photo of something natural…?
Even if we never learn what it is, we are very lucky and highly proud and thankful again being able to show what commitment and disciplined work can bring forward.

Unfortunately the Circle closes for 2 more weeks now because of the holdays.
We are highly looking forward whats to come.

If any reader knows, what the image shows, please contact us.

I close with many “thank you’s” referring to “Hans Bender” and his chemist-team.