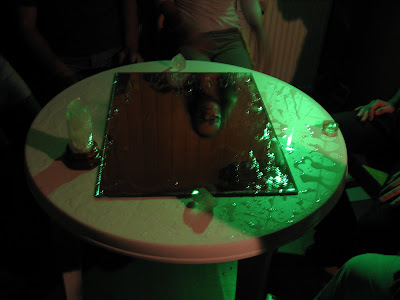 “I hope you will forgive us. You became unwillingly part of an “the chemists” experiment, testing different densities to bring objects succesful through in the future! I want to say sorry, but you can be sure it is only water – to be exact: 1,0 Litres of crystal clear blue pure water. Is everybody okay again?”, the spirit or trance-entity “Prof.Hans Bender” asked smirkingly the sitters, who, sitting in their wet trousers, answered : “Yes, no problem, Hans! We will be dried again soon!”

Approximately half an hour before: The group had its different topics of the opening and early seance modus operandi already done, like the greeting, the prayer and two hypnotic visualisation-practises, that all in all shall optimize the conditions of the group and the surroundings.

In the following phase, we call “free speech”, sitters chatted and sang and laughed and had no restrictions whatsoever (exceptionally the basic behaviour-rules naturally) in their communication attempts. This phase is therefore to relax the sitters concentrations on our issues and give subconscious impulses more room!

The entrancing sitter then announced, that “Hans Bender”, our new groups guide, would definetly speak tonight, what enlightened the sitters perspectives for the evening.

But at this point it seemed “Hans Bender” was some kind of unsatisfied and we were permanently requested by the sitter, who at this point was already receiving content from the Spirit-Energy-Matrix of Bender, to speak with one another or to sing with the music.

SPLASH! With a loud splash, like a balloon-made water bomb, a huge mass of water came down exactly above the center of the seance table, splattered in all directions and drowned everything, mainly the sitters laps and trousers. 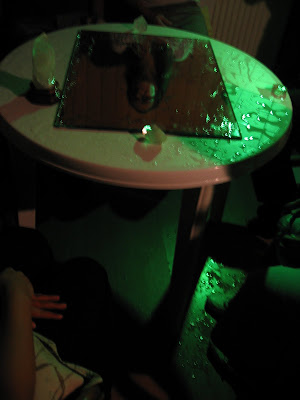 Picture: Note the water around the table on the floor…. (click to enlarge) 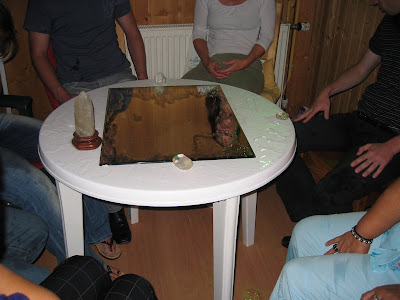 A few seconds later we sat in the light and watched a little bit guessless round the table which still was permanently dripping off huge amounts of water, that were alotted on the tables surface.
We at last decided to dry it with towels after we had exercised a taste-probe and some photos!

Soon after everything was in order again, for the first time “Hans Bender” this evening came through with a unmistakable presence and charisma, that astonished us.

For the first time he was so well assimilated with the mediums body that nearly for an hour we were allowed to ask questions, that were so thoroughly answered with wisdom and humor, that we all were deepply impressed.

In the last sittings, “Hans Bender” or “Imperator”, how he used to call himself during his first appearances, was mostly only very pragmatic and only giving instructions before vanishing.
This time everything was different.
He moreover offered us a new experiment in psychic photography, but explained certain energetic issues and warned us to produce a failure this time. He recommended to wait until next week with the next “psychic photographies” and so we did!

The uploading of mental energy fields, that enables our consciousness to interact with the plane of existence we call reality, the question why he, Hans Bender, was seemingly not yet involved in any reincarnation-process and the difficulties in communicating with the spirit world, were his issues and answers on sitters questions he explained to us in depth.

Additinally you can watch the photos, that show the circle-situation seconds after the masses of water were arrived – please additionally note the visible wet trousers of sitters!

At the time we are actually speechless how the spirit world feeds us evidence. We definetly cannot explain, why we are so privileged. We only want to motivate other groups to follow us asap!

We will keep you posted!

Kai for the Felix GroupAnd here is the rest of it.