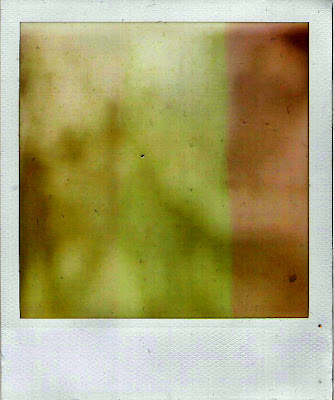 Picture: The paranormal Picture of the 29th of September, again conducted by “Hans Bender & the chemists”

(IMPORTANT: All photos can be enlarged by clicking on it!)

Tuesday the 29th of September the Felix Group again was enriched by the trance-appearance of the deceased German Scientist and well known Parapsychologist “Prof. Hans Bender”.
This time Hans Bender outlined the possiblities of the group and asked the group to decide which steps it wants to take to progress into the future.

He moreover explained that a certain series of tests “the chemists” were conducting, including the paranormal appearance of a huge mass of water falling from the ceiling weeks ago and the production of several paranormal Photographies were successful, why a further joint venture between the trance personalities and the group will be constructive.
On the other hand, Hans Bender explained he actually wasn t in charge determining who is “coming through” and that he eventuelly will change place with other entities, resp. that further communicators will join him.

The young mediumship of the entranced sitter is responsible that at the time always only one communicator is speaking through it, because the sudden change of etherical energy matrixes of different communicators “looping in” (sic) are in such a soon state of mediumistic development answered by the mediums body with severe headaches and certain signs of dehydration. The central communicator is despite of this narrowness able to gain informations of further spirit-personalities present, that normally would like to come through by themselves.

Hans Bender moreeover told that the security of the medium is always in their focus and that they have done different tests to benchmark its capabilities. Very strong reactions of sleeplessness, cramps and migrane attacks the night and the morning after were the results of them. Such reactions today have vanished completely and the assimilation of the external consciousness-matrix works fine so far.

What was a very desired topic to talk about with the spirit team was the question if finally guest-sitters are again being allowed to join us. With a hint, that every guest-sitting is in sight of the groups development a lost sitting, Hans Bender expressed the teams admission in regard of the fact, that the group wants to share its experiences. That is totally in accordance to the will of the spirit team as a whole, we were told, even if “Hans Bender” sees the Groups development as extremely important in the first place. So we were given green light for guest seances every 6 weeks under certain special conditions.

Hans Bender informed us, that the chemists announce a probability of 73% to exercise one single succesful “psychic” photography (in former sessions up to 4 photos were produced).
We were reminded that the photography-experiment would empty a certain power-field, that has to be filled up again for further Physical Phenomena. the group decided to do the experiment nevertheless.
After a break of 20 minutes in which all the preparations had to be made the modus operandi should be the same like in the former sessions for “Psychic Photography with the Chemists”:

– Use the same camera like before
– Photograph directly into the mirror positioned on the seance table
– Absolutely no light is allowed besides the control light of the camera, that more or less enables the group to watch the sitter pulling the trigger and watch the photo come out.
– Immediately afterwards the camera has to be closed to unlit the green control light, that must not fall onto the outwards transported polaroid.
– A second sitter overtakes the photo immediately after the closing of the camera and stores it inside the wooden box, she is holding in readiness.
– Finally Circle Leader overtakes the box and holds it in front of his solar plexus until seance is ended.
– Everything has to be done in total blacked out conditions
– Do a control photo

Exactly following the orders the second medium in the group, the 40 yrs. old Pedagogue Herman H., received the information that this time only one face will become visible on the photo, what could be confirmed later. 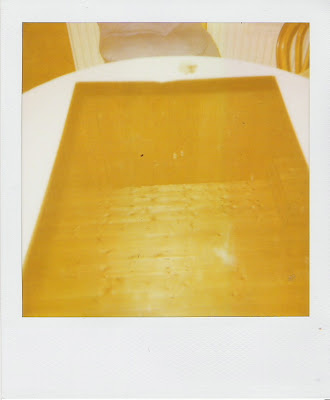 Picture: the control photo, done minutes later under non-experimental conditions, shows
what normally should have been visible on the photo 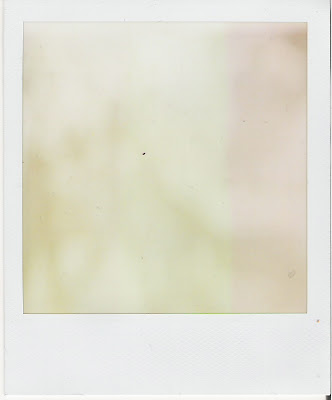 Picture: The only one experimental photo as it came out of the cam – unedited 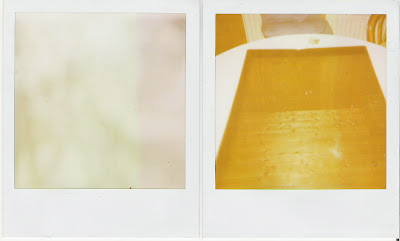 Picture: The experimental and the control photo besides show very obviously, that the experimental photo was an absolute success. The mirror arrangement is completely unvisible
and the picture again is clouded with some kind of mist, out of which several structures emerge

Unfortunately it was not possible to gain any informations about the face resp. the head that has become visible on the pic. The last time it became quite obvious who was showing themselves on the photo.

Even if we consider, that it is our mind-own shape-perception that lets us see the face, we can state one thing as very obviously: That what must have been shown on the photo isn’t by no means there – compare with the control photo. 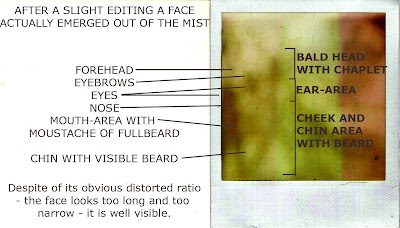 Picture: See the face as we have figured it out

That is the reason why we are pretty sure, that the face is the actual “message” in the photo and the whole session a great success, performed by the spirit team, lead by Hans Bender and the chemists.

Possibly we can get additional informations about the photo content from “Hans Bender” later as soon he is able to come through again.