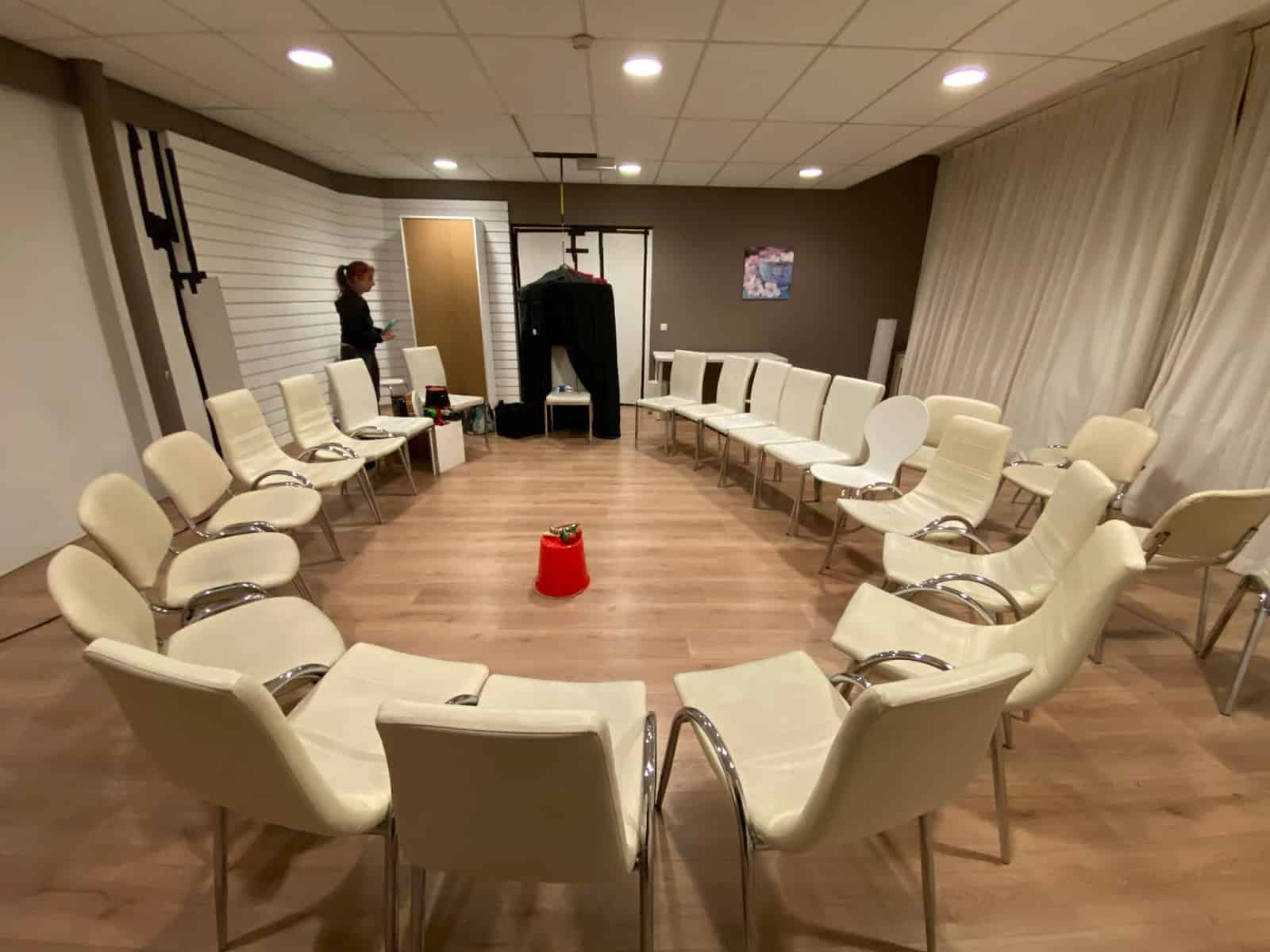 Olaf van der Hoeven is for years well known in the interested circles about spiritual manifestations, like healing or Physical Mediumship. He has an extensive knowledge about the contemporary Spiritual Movement and relative subjects. He is himself for years working as a respected healer and very much appreciated for his careful and reasonable tone in evaluating all sorts of phenomena. He is in his early 40ies and lives in the Netherlands. He was chosen during the séances in Hilversum in December 2019 to serve as the independent medium control-person, having the responsibility to secure the medium in its chair and holding his hands and feet during the darkness sections of the evening and frequently check the reliability of Julia Muegges holding control opposite to his. We are very thankful and his unaltered full report is very much appreciated. 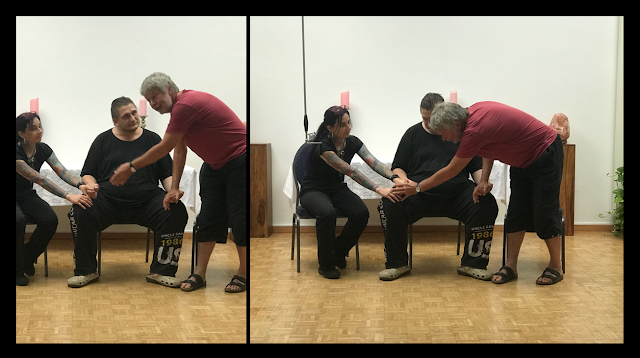 Well known Switzerlands Basle Psi-Associations President and acclaimed award-winning author Lucius Werthmueller demonstrating the effectiveness of the holding control for mediums from German traditions Experimental Mediumship, originating from the séances of Schrenck-Notzing with Rudi and Willi Schneider, but also with Eva C. or Eusapia Paladino. The photos were taken in Switzerland during an introduction talk for participants of our séances. It is exactly the control scheme, and Olaf is overtaking the role of Mr. Werthmueller in his following report.


BEING THE MEDIUM-CONTROL PERSON…
On Sunday December 1st i had the opportunity to be, together with his wife Julia Muegge, the second control sitter left of the medium, Kai Muegge. During the seance it was my task to hold the medium’s left hand with my right hand, and to keep his left leg firmly on the ground with my left hand, during the time the medium was in trance, seated in his chair. This was to ensure that any phenomena that would occur, would happen outside the muscular influence of the medium Kai Muegge.
During the seance i was asked many times to check Julia as well, to confirm that her hands were connected with the medium’s body as well.

I WAS FIRST HAND WITNESS WHEN OBJECTS MATERIALIZED (in red or white light)…
After the medium went into trance he was put forward outside of the cabinet, and was held by me and his wife Julia. The seance took about 2 and a half hours, and during this time, i many times checked for the sitters that the medium was indeed in his chair, tied in our hands, and with both of his legs on the ground.

During the seance we had many physical phenomena. There were flying trumpets, spirit touchings, materialised spirit hands above phosporus lit tiles (in a distance of approx 3 metres or 9 feet from the mediums upper body, the editor), winds in the room, extruding ectoplasm, and many objects that materialised.

For example, as i sat very close to the medium i was first hand witness that objects materialised and fell down from the mediums hands. They ’just‘ materialised and fell down in the hands of one of the sitters who was temporarily seated in front of the medium. It is good to know the medium wore a short sleeved t-shirt that reached just above his ellbows like a regular t-shirt does. The hands of the mediums were checked before that they were empty, and did not have anything up his sleeves‘ for the simple fact there were no sleeves.
During this demonstration of materialisation, the legs of the medium were always firmly grounded.

SAW FIRST HAND HIS EYELIDS SWELLING…
Many small gemstones materialised underneath the eyelids of the medium, and were gently being pushed out and fell on the floor. I was seated about 10 inches away from the medium, practically beside of him, and i could see first hand his eyelids were swelling, where just before there was nothing located under his eyelids (in white light shone from a flashlight in the mediums face who had its eyeballs rolled upwards fully).

At some other point (what was explained as) ectoplasm started pouring out of the mediums face. I could see it get larger and wider. Inside the ectoplasm i could see a crystal grow bigger and bigger. When it was big enough the crystal broke through the ectoplasm and it fell on the floor.

During all these phenomena i assured myself i (at all times) held the mediums hand, and kept his leg on the floor. I also assured myself his wife Julia also held his right hand, and also kept his right leg on the floor.
The body of the medium during the physical phenomena felt very relaxed, it did not have any muscular movement or excitement. It was relaxed and quiet all the time, it did not make notice of any muscular excitement.

All the physical phenomena occured outside of the (possible) muscular influence of the medium Kai Muegge. He remained seated in a relaxed and gentle way, without any muscular activity.