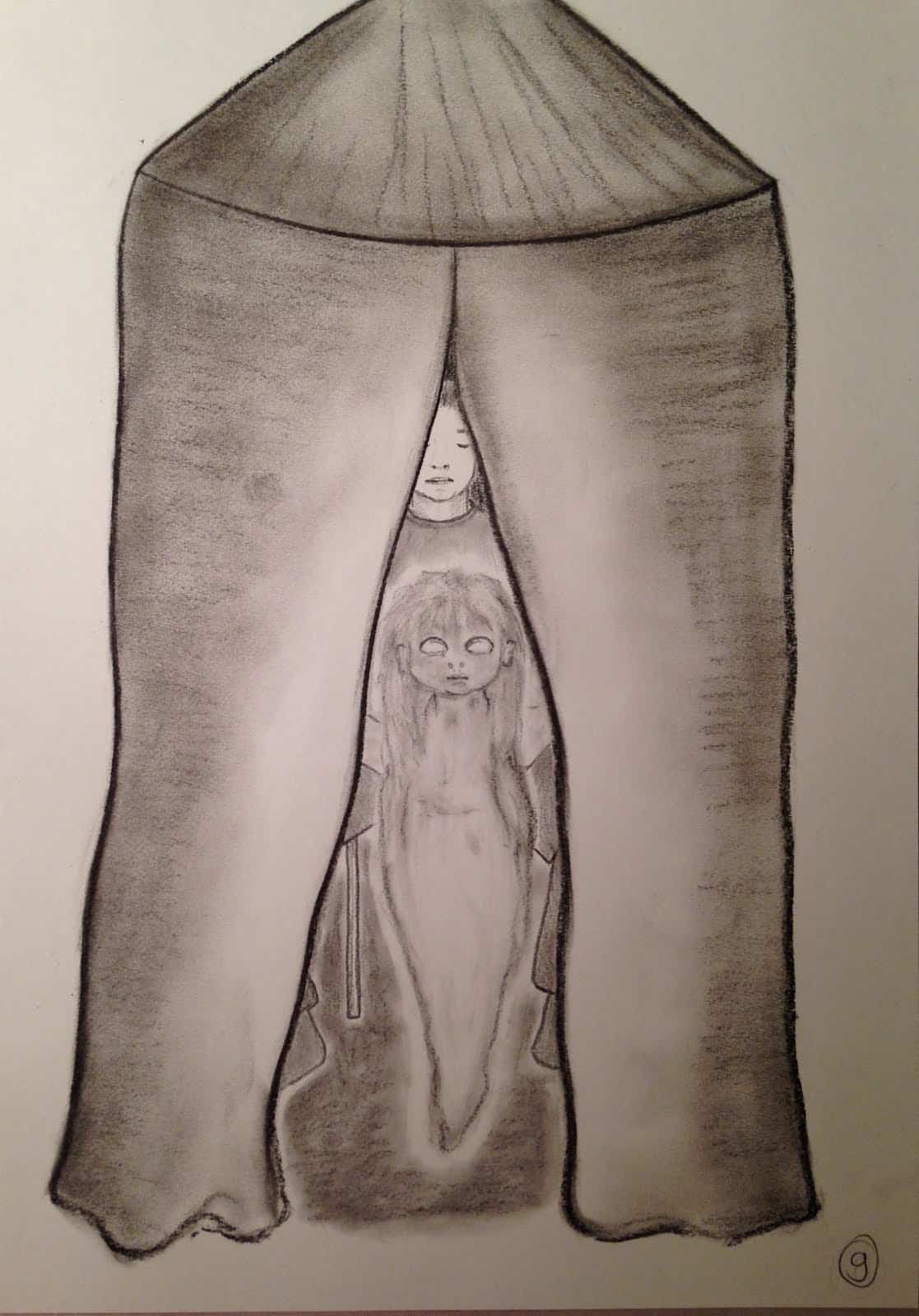 Over a year now the spirit-operators of the Felix-Circle are developing contemporary experimental forms of visible, resp. red lighted ‘Full Form’- or ‘Spirit-Form-Materialization, like they were reported and investigated in the past of Modern Spiritualism, mainly in the first decades.
Even though we enthusiasts today admire this form of ectoplasmic production, Parapsychology, that has grown more or less parallel to Modern Spiritualisms most earliest and strongest phenomena, somewhen in the past ended to investigate these amazing mediumistic features – mainly because of fear of ridicule and loss of integrity in the eyes of colleagues.
Maybe this was an decisive aspect also for the change within mediumistic ectoplasmics and their characteristics at the beginning of 19th century: A decline down to what is called ‘partial materialization’. At first those seemed to be more acceptable and accessible for parapsychological research parties.
In the end several historical aspects and dynamics within Materialization- and Physical Mediumship research and the way mediums were eventually generally perceived by the public also played a role.

A revival of Full Form Materialization confronts modern mediums in the first place with the lack of existing and accessible ‘memes’ to link in. As we know most of mediumistical phenomena follow beaten tracks, but nothing is as far, timely and intellectually, as the mysterious spirit-related human forms that have materialized under lighted conditions since the beginning of the Age of Modern Spiritualism.
Darkness Materializations occur today, but aren’t regarded as being the same even though most of the historical red light Full Form Materializations didn’t offer actually more visual information besides a few exceptions.
No, red light full forms aren’t demonstrated at the moment, and no contemporary informational consciousness field can be accessed to systemically link in and push an own development thus further.
Nevertheless we today share and present the following report about newest results in the Felix Circle.

The phenomenon can utilize different expression forms and the report describes two of them in a séance in March 2016 at the Basle PSI-Association.

Besides the reports’ author 18 further guests were present and witnessed what happened that memorable night in Basle a few weeks ago.

Report
of the K.M.-Séance (Felix Circle) in Basle, Switzerland, 10th of
March 2016
by M.K.,
Circle of the Primordial Light, Switzerland
(M.K.
(45) is a successful businessman from L., Switzerland and for many years
involved in sophisticated Physical Séanceroom-Experimentation. Together with
his wife he is investigating the phenomena for several years now extensively.  In his own house he in the meantime has
created an exclusive experimentation-room and sits for phenomena several days a
week. Since the beginning of his interest he thoroughly studies the nature and conditions
of modern physical mediumship phenomena in trainings, lectures and workshops in
Switzerland and other countries. He is familiar with nearly all demonstrating western
physical mediums and has thoroughly taken part in related North American Indian
ceremonies over the last years. Edit.)
This
evening I am sitting on the far left side of the room.
The mediums
induction does take longer seemingly and I speculate that might relate to the
grade of deep trance that is wanted to be achieved. In my report I will mainly focus onto a new
phenomenon that has happened this evening and will touch regular or already
multiple times described phenomena only superficially here.

After loud
knocks at the ceiling and upwards floating little lights inside of the cabinet,
with the first words of the trance-entity the medium right away produces
apports of a common nature (a diversity of gemstones of different cut and
color) that fall to the floor in the darkness. One of them is a larger red one
and newly unique in its form and according to the main spirit-control ‘Hans
Bender’ specifically suitable for healing treatments but also for experimental
groups and settings. The stones form enables a permanent transfer of energy entering
it on its broader side and delivers it at the thinner part, he claims. This time it is not given to a sitter and it ends in the collection of the BPV.

The medium
(entranced by the spirit Hans) then steps in front of the cabinet and
approaches those sitters in this séance for advanced participants who have
brought their own beforehand received ‘activation’- and ‘healing gemstones’ to
energize every single one of them. He stiffly walks from one sitter to the
other who all hold their stones ready ‘for action’.
In the following the medium entranced then moves his hands above the
stones until a strong light emanation appears and is directed into the stones.
Later the medium is back in the cabinet and the spirit announces ectoplasmic experimentation with the help of energetic potentials
also provided by the sitters, as he claims.
At first a
slightly self-illuminated tiny ‘ghost’ floats through the room like sometimes
in previous séances, a thin ectoplasmic strand, looking like spider webs, pale
and milky in the darkness of the room.
After this unknown
spirit-form has appeared that way, the spirit communicator asks for powerful
singing to introduce a first stage of further ectoplasmic production. After a
short time the ladies at the cabinet (who during the darkness phases of the
séance hold the medium at all four limbs as a form of control. Edit.) open the
curtains, red light is lit. Inside the cabinet we see a substantial fluorescent
spherical form, hovering to the right of the mediums head height. Form, compactness
and color remind me of a past workshop in H., when the communicators of our
‘Primordial Light-Circle’ (‘Klares Urlicht’-Zirkel – a term from the Tibetian
Book Of The Dead, describing the unique kind of light shining at the end of
‘the tunnel’ we enter when transitioning. Edit.) were materializing and appearing in front of us.
Cabinet
then is closed again and we are asked for more powerful singing for letting the
next form emerge. After several minutes the trance personality announces one of
the mediums main guides from the spirit team ‘Alchemists’ would shortly materialize behind the medium and that he, the communicator, now has to withdraw and
cannot talk anymore then.
PSI
Associations President Lucius Werthmueller receives the permission to
photograph the form.
The both
controllers to the left and right of the medium are instructed to shine
intermediary strong light into the cabinet enabling me to see sufficiently.
As
instructed by the spirits after a countdown they open the cabinet, drawing
the both curtain sides widely apart two consecutive times.
From my
perspective I see the medium sitting more or less opposite to me, from out of his
right ear a connection is visible to the figure on his right.
Behind and besides the medium in
full size a spirit has materialized.
The ectoplasm the figure is hooded by is
extremely dense and white (some sitters described it ‘whiter than white’, Edit.) and
looks unliterally said like new white sheets of linen.
What I see
immediately reminds me of historical photography of Materialization.
This kind
of substance I have never before seen with my own both eyes.
The outline of the
spirit materialization that has built is clearly visible: the head, the
shoulders and the arms. Details of a face I cannot distinguish, for this I sit too far away from the cabinet.
I see the mediums hand reaching
around the waistline of the ‘phantom’.
(Some said the spirit-form waved with its hands
towards the sitters. Edit.)
The ectoplasmic mass covering the entity falls down to
floor-level, I see it behind the feet and chair of the medium laying there.
Then the
curtains are closed again and ‘Hans Benders’ voice reappears and thanks us. He closes the circle quickly to release the medium from the trance
eventually.
The evening
was a memorable and amazing experience.
The camera
unfortunately did take too long to focus onto the spirit-form in the back of
the cabinet and no photo was unfortunately successful.
M.K.,
Circle of the Primordial Light, Switzerland