INTERESTING OBSERVATIONS – CONCERNING THE NATURE OF FEG MATERIALISATIONS – IN VIENNA 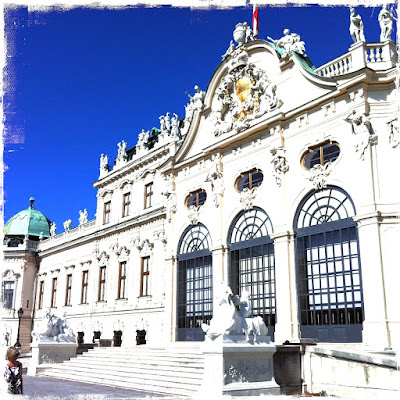 Pic: Chateau Belvedere. Vienna is the last imperial city in Europe. Today the lifepacked agility of a 1.8 Mio. inhabitants counting Metropolis combines with the breathtaking art and architecture of the past…

For the second time the FEG Spirit Team presented their ability to converse with the human realm in Vienna, Austria, in front 18 spectators out of different Intellectual Circles of Vienna!
The event was organized in cooperation with the K.- L. institute in Vienna and among the invited guests were engineers, therapists, physicians, scientists, psychiatrists and other consulting professions.
Some of them had some kind of experience with spiritual matters, at least the event organizers and their friends, others not. 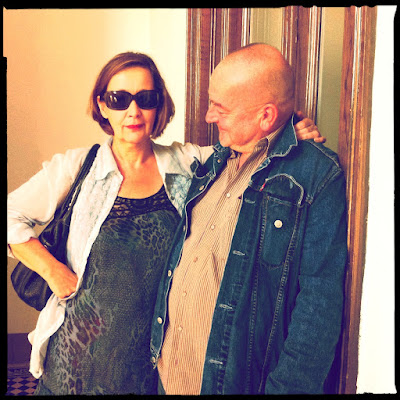 Picture: Barbara and Ernesto K.-L., long time scholars of the mysteries of mediumship and occultism and experienced event organizers

After the room was properly checked and afterwards guarded by a “sceptical” sitter, the medium additionally stripped his cloths completely in front of the event organizer Ernesto K.-L., redressed and entered without touching nothing his checked cabinet at the end of the room. 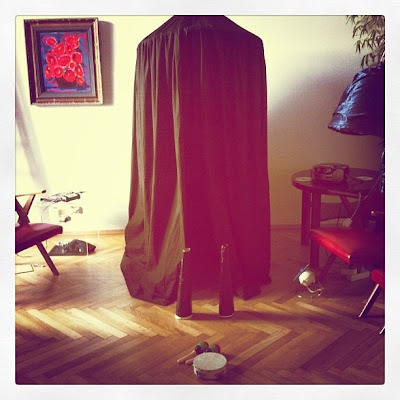 Picture: The next morning. On the lower right side the ventilator is still positioned….

In the course of the upcoming Seance very important observations could have been made by several sitters, that throw an interesting light onto the mechanics and character of the presented “ectoplasmic materialisations”.

One of these observations was made by Ernesto K.-L. himself, who sat directly at the cabinet and was responsible for the control of the medium and the light for the whole evening! 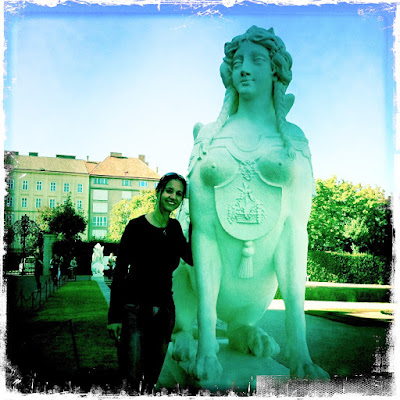 The other extraordinary observation was made by the complete sitters group during one of the 4 limb controls. During these controls the medium is hold on all four limbs and speaks at the same time! They shall show, that the medium, fully controlled by holding, is not involved in producing the parallely occurring phenomena!
All sitters at that moment sit in chain as well, so that in the end everybody in the room is controlled.
These controls are well known and countless times the medium had proven it is not involved in what is happening at the same time.
At several stages these controls are exercised during the Seance – always when strong phenomena are occurring, like spirit lights flying through the room, or materialised hands show themselves in 2 m distance from the medium!

But this time the hands showed an interesting other feature. Even though they are sometimes described as flat and usually crawl from the floor over the drums (bucket) rim, they this time did perform a drumming that showed they at least have to have a considerable mass and weight to perform such an audible action! 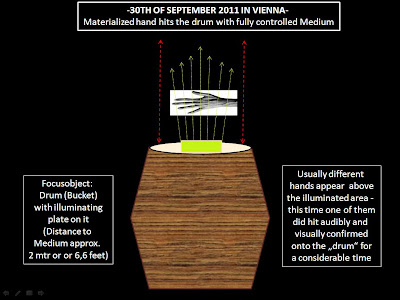 The sitters were astonishingly observing the hands performing, which in no way came from the cabinets direction but from the small space between them and the drum (bucket), positioned opposite to the cabinet in the bow of the U-Form, the sitters were sitting in.

Later then, after 2,5 hours of Seance, the throw-out of huge ectoplasmic masses from the mediums mouth is always a highlight and a moment of cognitive dissonance for the unexperienced sitters mentalities.

Loud choking noises prepare the sitters for the strange display that shortly afterwards is presented: With both hands the medium literally shovels volumes of white mass out of his mouth, that fall to the ground in front of him.
Seconds later this mass shows its morphological ability to form, reform, deform and move autonomously!

But this time an accident occurred. The small Ventilator in front of the Sitter sitting on the mediums left side, Ernesto K.-L. (E.K.L.), was still throwing a considerable breeze of air onto the medium. Normally the trance personality orders all coolness spending devices to be turned off during several phenomena, especially during the ectoplasmic out-throw.

But as it has occurred many times before, when “accidents” have brought unexpected insights f.e. in science, a peculiar behaviour of the presented substance could be observed by the controller (E.K.L.).

The presented substance at that stage has a thin, veil-like appearance, something that later changes into a more chaotically arranged cotton-wool looking appearance.

But fact is, that E.K.L. was able to clearly observe how the substance did part itself, did open a pathway, so to speak, to let the incoming stream of air pass through without causing too much tension within the substances structure! 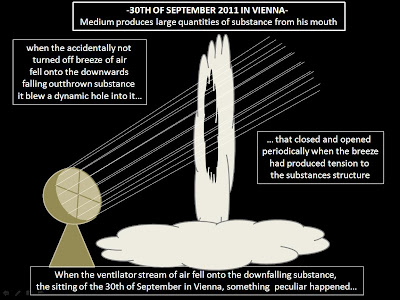 This “path” within the veil-like looking “fabric” did open and close periodically, clearly showing its dynamic and morphological ability to react on environmental influences autonomously.
No earthly “veil” or cottonwool is able to do such actions.

We from the FEG are considerably happy about these observations, leading us a step further in understanding the character and mechanics of mediumistic ectoplasmic display! 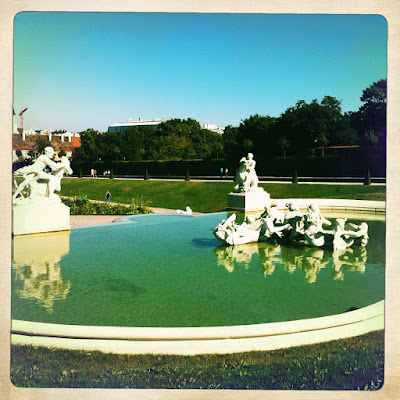 We want to thank the K.-L. Institute for their superb organisation and an unforgettable Seance the 30th of September 2011.